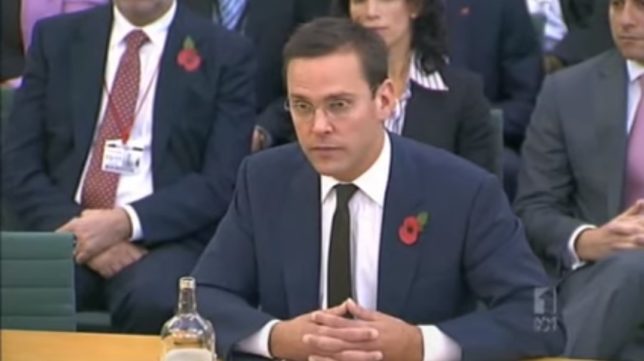 On November 6, three days after the election, Kathryn Murdoch tweeted in agreement with CNN anchor Jake Tapper on Fox News having “an obligation to put their country above their profits” by making it clear to their viewers “that there is no credible evidence of widespread fraud.”

In other tweets, she commented “We did it!!!!” in reference to Biden’s win projected by the media. She asked her followers, “What will you tell your children or your future self about the part you played in history?” She also retweeted posts mentioning Trump’s “authoritarian antics” and “surviving the gravest threat to our system of government since the Civil War.”

This would be unremarkable except that Kathryn Murdoch is the wife of James Murdoch, the son of media mogul Rupert Murdoch, who founded Fox Corporation (the company which operates all the Fox channels). Rupert Murdoch also owns Wall Street Journal’s publisher Dow Jones & Company, The Sun’s publisher News UK, HarperCollins, and News Corp Australia through his company News Corp.

In September 2020, James and Kathryn were 13th on the Center for Responsive Politics’ list of major donors in the 2020 cycle, and they are big patrons of Democratic causes in general.

FEC filings reveal that in June 2020 they each donated $615,000 to the Biden Victory Fund, a joint fundraising effort of the Biden campaign. They also made two donations of $106,500 to the Democratic National Committee followed up later that summer by $700,000 between the two of them to left-wing PAC Unite the Country and two $60,000 grants to African-American voter mobilization group Black PAC.

Additionally, this year Kathryn personally gave $1 million to the Democrats’ Senate Majority PAC and $540,000 to Future Forward PAC, while James sent a total of $500,000 to Change Now. The list of their contributions goes on, including previous years when the couple donated to Hillary Clinton.

Most interesting about Kathryn’s contributions, however, is the $2.16 million she gave to Unite America, where she is co-chair. Billed as nonpartisan, Unite America is a center-left political action committee that funds various efforts challenging the districting system in states with Republican legislatures, NeverTrumper Bill Kristol’s Defending Democracy Together (DDT), and liberal activist group Represent.Us. But Unite America mainly advocates for election reforms, including making mail-in voting as permanent option, not just during the COVID-19 pandemic.

In a previous blog post, I discussed the serious challenges that vote by mail poses, including election fraud and interference concerns, the increasing centralization of the vote-counting process, and the unlikelihood that absentee ballots arriving in such high volumes could be sufficiently examined for potential violations of identification laws as they have been traditionally.

Unite America found themselves in a convenient spot, though, when the COVID lockdowns gave them the opportunity to promote universal mail-in voting. Partnering with Center for Tech and Civic Life (which received $350 million from Mark Zuckerberg to regrant to jurisdictions throughout the country ahead of the general election), Democracy Works, and Voting Rights Lab—all left-of-center groups—it spearheaded the movement to introduce new voting methods with great success, with over 100 million people voting early by mail or in person in the 2020 general election.

It was a real missed opportunity from the White House. I think they are going to end up harming their own voters because lots of rural people are well served by the postal service and that’s an example of those feelings getting in the way of data and the science.

One can imagine why Kathryn Murdoch, the co-chair and a financial supporter of the main group behind the network of vote-by-mail promoters, would want her father-in-law’s news outlet to promote the narrative that vote-in ballots are completely immune to voter fraud.

Kathryn runs the Quadrivium Foundation, which she founded with James in 2014. Besides Unite America, Quadrivium funds several other election reform groups, including the aforementioned Voting Rights Lab, Represent.US, and Democracy Works, as well as the Millennial Action Project. It also appears to be a major benefactor of the NeverTrump movement. In 2018, Quadrivium Foundation conducted a study on which groups it could support to break “gridlock” in Washington. The chosen groups, besides voter participation and environmentalist groups, included Kristol’s DDT (whose 501(c)(3) counterpart publishes the media outlet The Bulwark) and his Republicans for the Rule of Law.

From 2006 to 2011, Kathryn worked for the Clinton Climate Initiative as the director of communications and strategy. She currently sits on the boards of Climate Central, the Environmental Defense Fund (which she funds through Quadrivium), and the Climate Leadership Council, which brands itself as a conservative group that supports climate change policies such as a carbon tax.

Kathryn was initially spurred to get involved with climate change activism after attending a talk by Al Gore in 2006. “I decided to switch everything I was doing,” she told New York Times. “I wanted to be able to look my children in the eye and say ‘I did everything I could.’”

All this involvement in climate change activism led James to formally split with his father’s company in August 2020 by resigning from the board of News Corp and from director positions at Wall Street Journal, Fox News, New York Post, and Australian. This was after he received $2 billion from the sale of 21st Century Fox to Disney, which he put toward philanthropic efforts.

In response to questions about his son’s departure, Rupert Murdoch told the press that his company does not deny climate change. “We are not deniers,” he protested.

However, a long history of disagreement over climate change coverage preceded James’s resignation. James had often tried to steer Fox News and News Corp outlets in a more liberal direction, often butting heads with his father’s employees. In January 2020, James and Kathryn released a public statement expressing their “frustration” with the Murdoch media network’s contribution to climate change denial, specifically in regard to News Corp’s coverage of Australian wildfires.

One wonders whether familial pressure from his younger son and daughter-in-law may be influencing the media mogul’s recent executive decisions at Fox News.

After Fox called Arizona for Biden earlier than other media networks, Trump and many Trump supporters expressed deep disappointment in the network, which for a long time had been a major voice of the American conservative movement. Trump allegedly screamed at Rupert after the decision, demanding that he retract it, but Murdoch held his ground and refused.

There has been talk that Trump might team up with Newsmax to create a Trumpist media outlet, as Newsmax CEO Christopher Ruddy has been courting favor with the movement. “Fox was very schizophrenic in this previous election in its support and consistency about the president,” Ruddy said in an interview with CNBC. “I think Newsmax was consistently supportive of the president. I think he was very disappointed.” Ruddy also noted, “We have the distribution, now, to compete with them head on.”

Rupert Murdoch seems to be responding to these motions with concern: He is reportedly considering giving Trump a $100 million package including a book deal for a presidential memoir with HarperCollins and a contributor position or even his own show on Fox News.

However, Murdoch’s Wall Street Journal editorial board just expressed their disapproval of Trump contesting Georgia’s election results, arguing that it could harm Georgia’s senate runoff race in January by splitting the party. “If Republicans lose those seats, President Trump will be the main reason, and the main casualty will be his legacy,” they wrote.

Trump has a strong grip over the Republican base. People in the Trump movement have already resolved to boycott Tucker Carlson’s program and became infuriated with him. Not too long ago, he was one of if not the foremost representative of the Trump movement in the mainstream media. Then he questioned the veracity of a Trump lawyer’s allegations of voter fraud.

The outcome of these internecine conservative battles over the next few weeks could decide the political alignment, and relevancy, of Fox News and the rest of Murdoch’s media empire for years to come.