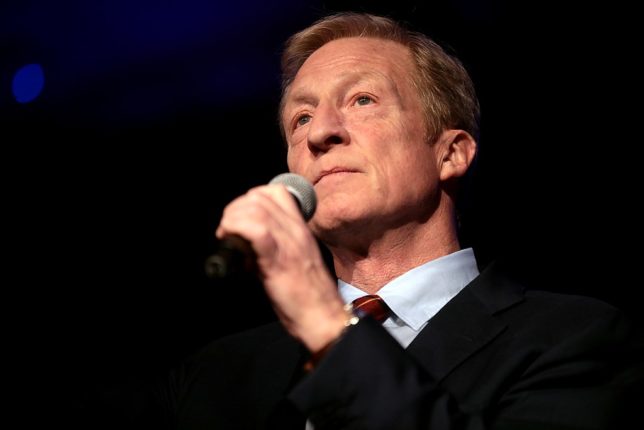 California billionaire Tom Steyer is one of the foremost mega-donors financing the Left’s war on cheap and abundant electricity.

Steyer’s ultra-liberal brand of environmentalism is eco-authoritarianism at its worst. As a candidate he pledged to use presidential authority to impose energy efficiency standards and “give Congress 100 days to pass a Green New Deal.” In an age when many on the Left howl about the need for a “national dialogue” on climate change, Steyer takes a page from Stalin’s handbook. “We’ve got to stop talking about this,” he said of global warming in a 2019 interview, “we have to turn the page to action and we should do it Day One by calling it a state of emergency.”

Yet the former hedge fund investor Despite spending over $191 million nationwide advertising his 2020 Democratic presidential candidacy, his campaign flopped. He managed to come in third in just one state (South Carolina), even though he made climate change a central theme of his campaign in a Democratic Party dominated by the far Left.

Steyer has always chased the far Left—even if he’s often foundered. In 2018, he spent a whopping $120 million on his “Need to Impeach” campaign against President Trump. As he told the press, “I will be dedicating 100 percent of my time, effort, and resources to one cause: working for Mr. Trump’s impeachment and removal from office.” It failed.

Steyer was the single largest donor in the 2016 election cycle, spending almost $90 million to help liberals advance climate change as a major electoral issue. Despite his gobs of spending, the environment came 12th on a list of top issues for voters in a 2016 Pew Research Center poll.

But he hasn’t given up. The San Francisco billionaire has vowed to give away all of his $1.6 billion in the Giving Pledge (also signed by liberal billionaires Bill and Melinda Gates and Warren Buffett), which CRC’s Ken Braun notes puts his spending at or above the level of George Soros.

See CRC video “Who is Tom Steyer? ” by Ken Braun.

That means pushing the Left’s increasingly radical global warming agenda on Americans. Steyer’s PAC, NextGen Climate Action Committee, spent a massive $64 million helping Democrats retake the House of Representatives in the 2018 midterms. It’s poured over $37 million in independent expenditures into 2020 races for Congress and the presidency—the vast majority of the funding provided by Steyer himself.

Plenty of ink’s been spilled on the $41 million spent by three PACs to oppose passage of Arizona Prop. 127—the 2018 constitutional amendment that would have mandated increasing the state’s reliance on “renewables” from 12 percent of its energy in 2020 to 50 percent by 2030. The vast majority of the “renewable” energy came from Pinnacle West, the parent firm of Arizona Public Service, Arizona’s largest electricity provider. Arizonans defeated Prop. 127 in a 68.6 to 31.4 percent landslide.

Far less has been written about the $25 million campaign (Clean Energy for a Healthy Arizona) to pass Prop. 127, $23 million of which came from the San Francisco–based NextGen Climate Action, NextGen PAC’s 501(c)(4) “sister” nonprofit. Another $1.3 million in donations came from the leftist pass-through League of Conservation Voters—meaning that less than $623,000 of the “clean energy” campaign’s donations came from other individuals or organizations. 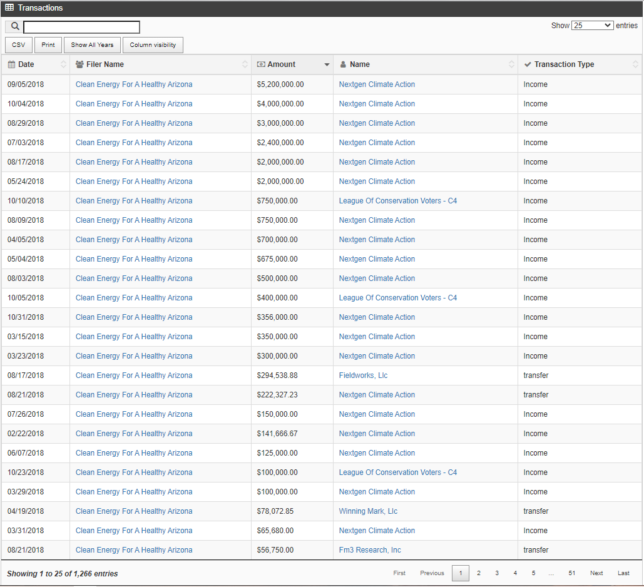 Top Donors to Clean Energy for a Healthy Arizona

NextGen Climate Action gave another $4.2 million to Clean Energy Michigan in 2018, the PAC behind a failed effort to raise the percentage of “clean energy” generated in Michigan to 30 percent by 2030. (it’s currently less than 12.5 percent.)

Whatever one’s opinion of global warming theory, this is political manipulation at its worst—a cynical campaign by coastal elites to reshape the country in their image.

And it isn’t just climate initiatives, either—NextGen Climate Action gave $688,000 to America Votes in 2018, which bills itself as “the coordination hub of the Progressive community.” America Votes emerged from the Democrats’ defeat in the 2004 presidential election as the brainchild of a group of influential leftist operatives.

It’s all part of a larger project by elites to expand the “Progressive” dystopias of San Francisco, Chicago, and Manhattan to so-called flyover country. Don’t be fooled—this is nothing less than the Left’s bid to fundamentally transform the country from a federal republic under the Constitution to a plutocracy run for elites, by elites.