The Trace: “Independent” Journalism, Paid for by Michael Bloomberg 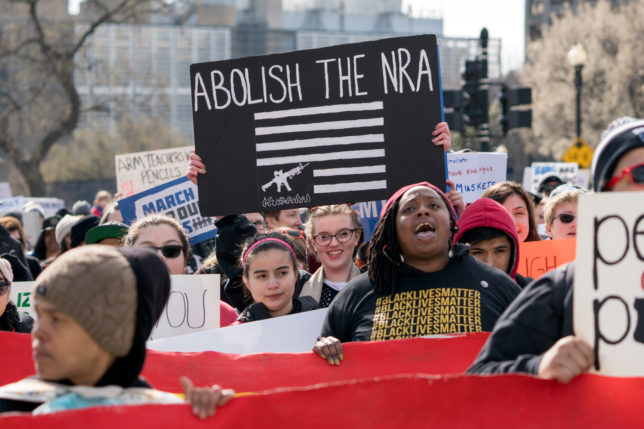 The Trace may call itself an “independent, nonpartisan, nonprofit newsroom,” but it has one clear agenda in mind: restrictive gun control laws, an objective shared by its left-wing funders.

The Trace is a New York-based nonprofit (officially “Trace Media”) that publishes research on gun violence widely cited by media outlets on the Left such as the New Yorker, Politico, The Atlantic, and Buzzfeed. Perhaps unsurprisingly, the group makes no bones about targeting the conservative National Rifle Association (NRA) as well as states with right-to-carry laws.

And to its credit, the Trace acknowledges that it’s funded by a number of left-wing foundations, noting that “accepting financial support does not mean we endorse donors or their positions.” The Trace even includes Everytown for Gun Safety Support Fund in its list of grantors, the fundraising arm of the gun control lobbying group created in 2014 by former New York Mayor Michael Bloomberg to counter the reach of the NRA. Bloomberg continues to provide much of the group’s funding.

Everytown has been criticized by groups on the Left and Right for playing fast and loose with its “mass shooting” statistics. In 2018, Everytown falsely reported that there had been 18 school shootings in the U.S. in the first 43 days of 2018—a real stretch, since the group defined “school shooting” as “any time a firearm discharges a live round inside a school building or on a school campus or grounds.”

Of course, the Trace is correct that funding does not necessarily dictate a group’s views, and it should be lauded for seeking transparency in potential conflicts-of-interest arising from association with Everytown for Gun Safety and other left-wing gun control funders.

Yet that doesn’t explain why this band of “independent” journalists fails to mention its association with John Feinblatt, president of Everytown for Gun Safety, Everytown’s fundraising arm, and president and board director of the Trace.

In fact, a search of the Trace’s website reveals zero references to Feinblatt—save where he appears on their IRS Form 990 tax filings. 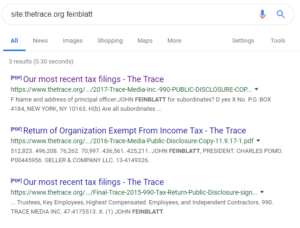 From 2010 to 2013, Feinblatt worked as an aide to then-New York Mayor Michael Bloomberg, who even presided over his marriage to his partner, Jonathan Mintz, in 2011. Feinblatt assumed control of Everytown soon after Bloomberg founded it in 2014. He’s something of a one-trick pony; last November Feinblatt called the Democratic Party’s success in retaking the House of Representatives a “mandate for Congress to act on guns” and bragged about Everytown’s success in aiding pro-gun control Democrats in their 2018 congressional races.

Feinblatt’s been president of the Trace’s board of directors since the very beginning, according to the group’s 2015 filing.

That’s not surprising, either—an archived version of the Trace’s website from December 2015 reveals that the group’s “seed funding was provided by the Everytown for Gun Safety Support Fund and the Joyce Foundation” (a foundation whose board included Barack Obama for eight years before he became President).

In 2008, Politico’s Ken Vogel reported that Joyce spent nearly $2.7 million on anti-gun rights groups, including funding “legal scholarship advancing the theory that the Second Amendment does not protect individual gun owners’ rights.” Joyce even paid for a book entitled Every Handgun Is Aimed at You: The Case for Banning Handguns.

He’s also a major gun control activist. Hanauer is the founder of the Washington Alliance for Gun Responsibility (an Everytown ally) and has spent at least $400,000 backing ballot initiatives to expand background check requirements in two states.

The Trace’s board of directors also includes Ken Lerer, the ultra-wealthy media executive and owner of the Huffington Post and Buzzfeed (the latter is listed as a partner with the Trace) which also provided startup funding to the Trace.

So why doesn’t the Trace disclose its connection to John Feinblatt? Perhaps it’s to avoid drawing too much attention to the massive funding it gets from Feinblatt’s group, Everytown for Gun Safety Support Fund.

While 501(c)(3) nonprofits like the Trace aren’t required to disclose their donors (only the donation amounts), Everytown’s 2017 IRS filing reveals that it supplied over $1.8 million to the group in 2017—or 63 percent of the group’s total revenues for that year.

In fact, the Trace only reported three donors in its 2017 filing; besides Everytown, the Joyce Foundation provided the group with another $150,000, while the remaining $900,000 or so likely came from the Kendeda Fund, though that can’t be confirmed. 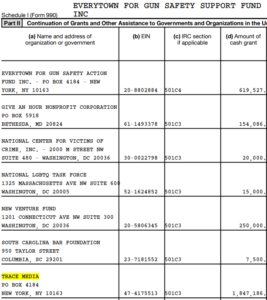 And in 2016, Everytown was the Trace’s sole grantor, providing another $1.8 million to the group, or 97 percent of its total funding for that year.

Certainly, the Trace doesn’t shy away trumpeting from its pro-gun control position, which leaves one wondering why the group seems so keen on quietly distancing itself from Everytown for Gun Safety, the Left’s loudest voice on gun control.

But one thing is clear: the Trace isn’t as transparent—or “independent”—as it pretends to be.