The State of Redistricting 2022: Power Players 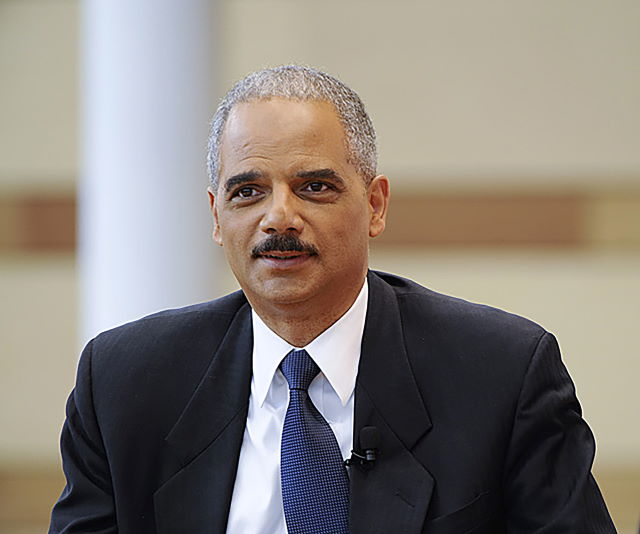 Launched by then-President Barack Obama and headed by former U.S. Attorney General Eric Holder, the National Democratic Redistricting Committee (NDRC) would serve as a “strategic hub for a comprehensive redistricting strategy” to secure a Democratic majority in the House of Representatives and in state legislatures for the post-2020 Census districting period. Credit: The Aspen Institute. License: https://bit.ly/3xhAnzJ.
by Michael Watson

As redistricting heats up, activists aligned with both political parties will rally support for districts that favor their preferred party and target the other party. And as noted before, the only “law” of redistricting is Barone’s, so everyone’s definition of “fair districts” is “districts favorable to my side.”

Eric Holder and the Democrats. In early January 2017, the Democratic Party announced a major effort to secure redrawing of congressional districts for the last two elections of the 2010–2020 cycle and to win control of redistricting for the post-2020 period. Launched by then-President Barack Obama and headed by former U.S. Attorney General Eric Holder, the National Democratic Redistricting Committee (NDRC) would serve as a “strategic hub for a comprehensive redistricting strategy” to secure a Democratic majority in the House of Representatives and in state legislatures for the post-2020 Census districting period. Its announcement proclaimed that the NDRC was the “first organization of its kind: A Democratic group that brings together major party organizations on a multi-cycle, state-by-state redistricting strategy ahead of the 2020 Census.”

In October 2017, Holder’s NDRC formed a formal partnership with Organizing for America, the successor organization to Obama’s presidential campaign committees. By 2018, the partnership was characterized as a “merger” to “create a ‘joint force that is focused on this issue of singular importance’ (redistricting).”

Known liberal institutional funders of National Redistricting Foundation include the Hopewell Fund, an entity in the Arabella Advisors network of liberal “dark money,” which provided NRF with $683,330 in 2019. Other known funders include the Goldhirsh Foundation, Miner Anderson Family Foundation, and Z. Smith Reynolds Foundation.

Democratic Wolves in “Nonpartisan” Clothing. While both the Republican-aligned Fair Lines and Democratic-aligned National Redistricting 501(c) organizations are nominally nonpartisan for legal reasons, other, less-obviously-aligned groups campaign for and assist the Democratic redistricting efforts.

The most prominent of these Democratic-aligned organizations is the League of Women Voters (LWV) and its many state and local chapters. They have allied with Democratic efforts to set up redistricting commissions and supported liberal efforts to influence redistricting commissions. While the League made its name first promoting civil rights and later hosting candidate forums and presidential debates, the organization has aligned with—and received substantial funding from—left-progressive institutions, especially since the 1980s.

In states without commissions, the LWV and LWV chapters have established “Fair Districts” front organizations, among them Fair Districts PA for Pennsylvania and Fair Districts NC for North Carolina. The league joined National Redistricting Foundation in litigation challenging the state’s congressional map, and the partisan-Democratic state Supreme  ourt later found in favor of Holder and the league.

While Democrats proclaim a “gerrymandering” crisis, an analysis of the U.S. House election results shows that even under a European-style proportional representation system the sizes of the House party caucuses would not have changed. This is not the sort of outcome that demands a fundamental reordering of how legislative apportionment works.

Further, the redistricting commission system—perhaps especially the “independent commission” system that H.R. 1 would mandate nationwide—does not yield a more proportional outcome. Rather than placing power in the hands of people’s elected representatives and statewide officials above them, it places power in the hands of organized advocacy groups and nonprofits.

Those wondering why partisan progressives would want to take power from legislatures and elected officials and give it to organized advocacy nonprofits need only remember that Capital Research Center found that liberal advocacy nonprofit revenue exceeds conservative advocacy nonprofit revenue by approximately four-to-one. Further, these organized liberal interests freely hide behind front organizations like the League of Women Voters that appear to be and are sold by the metropolitan-liberal press as far less partisan than they are in reality.

For now, the trench warfare of redistricting continues as scheduled, subject only to Barone’s Law, the Voting Rights Act, and the Supreme Court’s one-man-one-vote standard. How it proceeds will greatly determine how the next Congresses look, until changes in the political winds demolish the best-laid plans of politicians and activists.