The Spectacular Failure of One Laptop Per Child 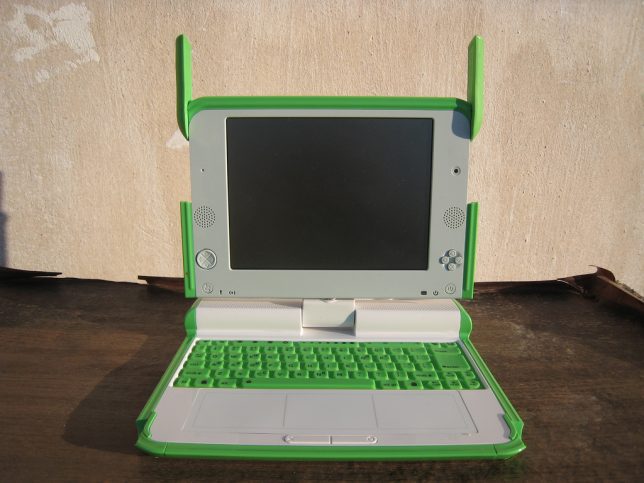 This article originally appeared in Philanthropy Daily, May 24, 2018.

It’s a problem that continually recurs in development. Every few years someone comes up with a device that will enable tens of millions of people to escape from poverty. But these “magic bullets” turn out to have very little magic, and more often than not, the glorious promises made by these devices are rarely fulfilled.

Adi Robertson in The Verge reports on the classic example of a failed technological “miracle”—the $100 laptop announced by One Laptop Per Child (OLPC) a nonprofit founded by MIT professor Nicholas Negroponte in 2005. I noted in a piece I wrote two years ago on low-cost microscopes known as “Foldscopes” that One Laptop Per Child was the classic example of a device designed to help the Third World where the promises made vastly exceeded the results produced. But Robertson explains in depth the reasons why OLPC was such a spectacular failure.

One Laptop Per Child introduced its device at the World Summit on the Information Society, held in Tunis in 2005. At the summit, UN Secretary-General Kofi Annan tried to turn a crank designed to generate electricity for the laptop. The crank broke in his hands.

Some delegates to the conference said that their countries had higher priorities than laptops. “What is needed is clean water and real schools,” Cameroonian delegate Marthe Dansokho told CNN.

One Laptop Per Child made arrangements with Taiwanese computer maker Quanta for a million units of what would be known as the XO-1. Developer Walter Bender came up with an operating system called Sugar, derived from Linux, that was especially designed for children.

Then the problems began.

The hand crank that had given Secretary-General Annan so much trouble was vaporware; all working versions of the XO-1 were designed to be plugged in to electrical outlets. But the problems continued to cascade.

The XO-1 was never marketed for $100. Manufacturers cut costs to $180, but some of the cost-cutting involved making parts that were not interchangeable with other computers. The solid-state storage system of the computer was sturdy, but could only handle a gigabyte of data. Nor could the XO-1 be connected with the Internet. While the machine was sturdy, the idea that it could be casually dropped was a fantasy.

One Laptop Per Child also had competitors, including Intel and Taiwan’s AsusTek, who could create computers that sold between $200-$400. These were the first netbooks, which were both profitable and something consumers in the Third World wanted and could afford.

OLPC did manage to sell 600,000 laptops by the end of 2007. But the Great Recession stalled plans for the XO-2. OLPC split into two—an OLPC Foundation, which supported product development, and an OLPC Association, which would distribute computers, primarily to Latin America, which became OLPC’s primary market.

Negroponte occasionally came up with bold plans, including one in 2011 where he declared he would drop tablets out of helicopters loaded with 100 books as a way to encourage children to read. These tablets were never created, and by 2014 the OLPC Foundation was defunct. The OLPC Association continued to distribute laptops in Latin America; in 2015 the association was acquired by the Fundación Zamora Terán, a Nicaraguan nonprofit whose wealth comes from banker Roberto Zamora. Sugar Labs continues as a nonprofit and continues to develop inexpensive software that can be bundled into computers.

But the problem is that the computers the Fundación Zamora Terán distributes “have less memory and storage than a budget smartphone.” They may help the poorest of the poor, but today the market offers even very poor people better options than what OLPC offered. Moreover, the evidence that the computers OLPC provided helped children do better in school is, at best, ambiguous.

The lesson the One Laptop Per Child story offers donors is that flashy solutions are often not the best ones. Far better to give the poor things they need and want—including clean water and good schools—than invest in technology that may not work and may not help the poor advance in school and in life.

“Thirteen years ago, OLPC told the world that every child should get a laptop,” Robertson concludes. “It never stopped to prove that they needed one.”