The Price of Fleeing Middle America 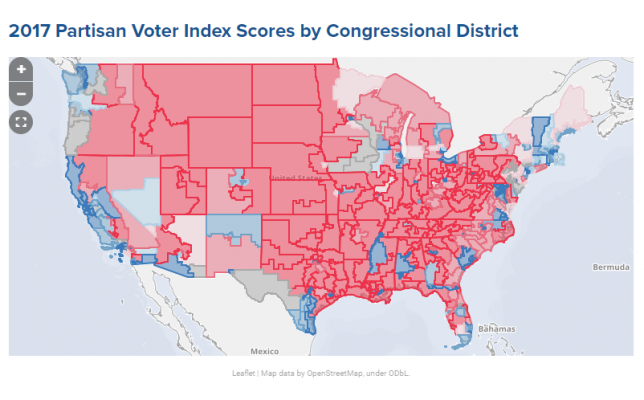 New studies show that the gaps dividing Republicans and Democrats grew substantially under Barack Obama, and have only continued to expand under Donald Trump. But which side is fomenting this polarization?

One study conducted by the Pew Research Center shows a sharp shift to the left in the Democratic Party, but not a commensurate push to the right in the Republican Party. The survey, which has measured Americans’ views on “the social safety, net, race and immigration” since 1994, reveals a startling statistic: partisanship—not race, sex, or socioeconomic status—is the biggest split between Americans. These findings are reflected in participants’ feedback on political issues:

Over the past six years, the share of Democrats and Democratic-leaning independents saying the government should do more to help the needy, even if it means going deeper into debt, has risen 17 percentage points (from 54% to 71%), while the views of Republicans and Republican leaners have barely changed (25% then, 24% today).

Partisan disagreements over race relations are even more striking:

The average difference between polled Democrats and Republicans is a gigantic 36 points. The Pew study does find that Republicans have, on average, grown more conservative in policy, but not nearly to the same degree as Democrats. They also report increasingly liberal views among Republicans on some social issues: 54 percent “favor acceptance” of homosexuality today, up from 38 percent in 1994. Democrats’ views on such issues, though, have moved further left, faster – with 54 percent favoring acceptance of homosexuality in 1994, and 83 percent favoring it in 2017.

In other words, America’s liberal party is trending leftward, but far exceeding changes in the country’s cultural, demographic, or economic landscape – and the electoral consequences are devastating.

A research study funded by the Open Society Foundations, one of George Soros’s nonprofits, examined the responses of 400 self-identified members of the “white working class” who supported Donald Trump in the 2016 presidential election. Although some respondents said they were “appalled by” some of Trump’s statements during the campaign, they regarded him as an honest, direct, “straight talker” compared with Hillary Clinton and his Republican primary opponents.

For anyone who followed the campaign, the findings are hardly groundbreaking. Respondents were deeply frustrated with the permanent economic crisis culture that characterized the Obama era, with tense race relations, rising crime rates, and diminishing opportunities for Americans to move from school to work and wealth. As one interviewee put it,

I am working hard enough to have the American dream but I [just don’t] have it. I am… living from pay check to pay check.

Political correctness and identity politics—increasingly the hallmarks of the elitist Left—have stifled free speech, they report. Accusations of racism for merely having European ancestry has subsumed prosperity, unity, and patriotism in favor of a race-baiting inquisition—especially galling in the face of widespread economic hardship among supposedly “privileged” white people.

Although many respondents grew up in pro-Democratic families and previously supported Democrats for public office, a huge number say they feel alienated by Obama’s Democratic Party. Considering its leftward trend, this is unsurprising. In 1992 a plurality (43 percent) of Americans self-identified as “moderate;” the next-highest tier was conservatives (36 percent). Only 17 percent self-identified as “liberal.”

As CRC’s Dr. Steven J. Allen notes, those figures noticeably shifted by 2012—to 39 percent conservative, 35 percent moderate, and 22 percent liberal—but critically, not according to geography. In 2012 conservatives made up a plurality in a whopping 33 states. Moderates were a plurality in 17 states, and liberals in none. Compare that with 2009, when conservatives were only a plurality in 26 states, moderates in 21 states, and the two blocs were tied in three more. Even when broken down further, conservatives made up at least one-third of the population in 39 states in 2012—but liberals have failed to break that threshold even once in the last eight years, largely because they tend to concentrate in a handful of huge, coastal cities. In short, the cosmopolitan Left has self-segregated and turned increasingly inward politically. Conservatives have filled much of that void.

In a constitutional republic founded on counties and states, that kind of isolation spells electoral doom.

by Hayden Ludwig on May 12, 2021
Deception & Misdirection

by Hayden Ludwig, Kevin Mooney on May 12, 2021
Deception & Misdirection