The Payments Behind a Union Boss’s “Priceless” Photos 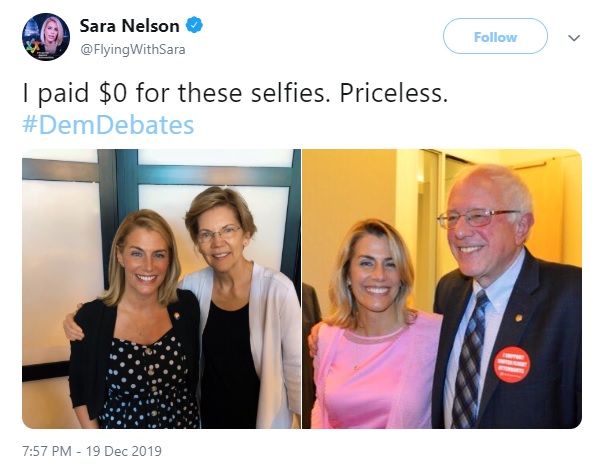 Sara Nelson, who goes by the handle @FlyingWithSara on Twitter, is the president of the Association of Flight Attendants-Communications Workers of America (AFA-CWA), a labor union representing airline flight attendants that is a division of one of the most left-wing major labor unions in the country. During the Democratic Party primary debates Thursday night, Nelson tweeted photos of herself with U.S. Senators (and debate participants) Elizabeth Warren (D-MA) and Bernie Sanders (I-VT), claiming “I paid $0 for these selfies. Priceless.”

That may not be, strictly speaking, entirely accurate. Laying aside the ontological question of whether a picture obviously taken by someone else is a “selfie,” Federal Election Commission records show one Sara Nelson, a resident of Maryland employed by AFA-CWA, as having given $100 to “Warren for President, Inc.” in September 2019. She gave hundreds more to unknown liberal political recipients in 2018 and 2019 through the fundraising portal ActBlue, according to the FEC disclosures.

But Nelson’s relatively small political contributions are dwarfed by the contributions and involvements of the Communications Workers of America (CWA). As president of AFA-CWA, Nelson is an ex officio vice president of the national CWA union, reputedly one of the most left-wing major American labor unions—in part because CWA endorsed Sanders for president in 2016 instead of Hillary Clinton, presumptive mainline Democrat and party favorite. During CWA’s 2016 fiscal year (June 2015 through May 2016), the union contributed $50,000 to the Working Families Party National Committee, a minor political party aligned with the Democratic Party’s left wing that also endorsed Sanders that year. (Sanders returned the favor, encouraging New Yorkers to vote for Clinton in the general election on the Working Families Party line because the WFP came closest to his “vision of democratic socialism.”)

Former CWA president Larry Cohen is also the chair the board of Our Revolution, an advocacy group that advertises itself as “next step for Bernie Sanders’ movement . . . which will fight to transform America and advance the progressive agenda that we believe in.” According to the Center for Responsive Politics, CWA-affiliated political action committees (PACs) spent $1,500 supporting Sanders’s re-election to the Senate in 2018.

And, like Nelson herself, the CWA is also closely aligned with Senator Warren. The union’s PACs have provided substantial support to Warren’s campaigns for the U.S. Senate. At the same time, union member dues have supported Demos, a think tank with close ties to Warren. Warren’s daughter chaired its board and is listed as trustee emeritus. In total, Department of Labor reports show CWA and Local 1180, the CWA local union representing New York City government workers, paid $139,750 to Demos since 2009. CWA added an additional $55,000 to Demos Action, a Demos-aligned advocacy project run through the Tides Advocacy Fund.

So while Nelson, a member in good standing with the left-wing tendency of union bosses, might have found her moments with two U.S. senators priceless, her members likely did not. In a substantial sense, those members paid for them.