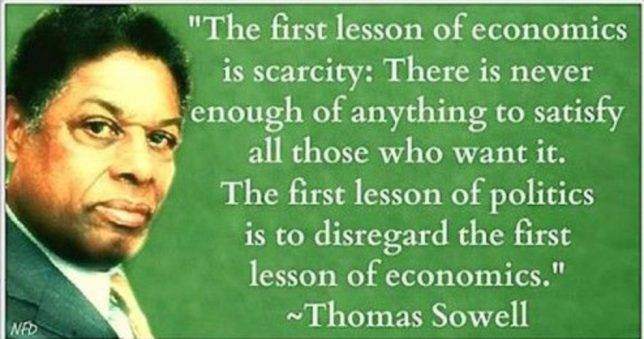 Sowell: An error of omission involves leaving out a crucial fact. The huge error of omission in most statistics, ranging all the way up to international studies, is to assume there is a fixed number of people in given income brackets over time. For example, you may hear how much money the top 400 income earners in the United States make. And you’ll see things like over the years the top 400 have been getting X percent of all the benefits and so forth. Now, you might ask, how many people are in the top 400? And the obvious answer is 400 people. But shortly after my book went to press the Internal Revenue Service released data on the top 400 income earners over a 23 year period and it showed numerous things. First, the number of people in the top 400 was actually 4,584. So the income that is often attributed to just 400 people was actually earned by over ten times that many people, which is to say that the disparity was exaggerated ten-fold. Second, of the people who were in the top 400 over that 23 years, 71 percent were in that category only one time. And I think this is relevant to the oft repeated statement that the system is rigged by the rich. Now, if the rich are rigging the system in such a way that most of them cannot get back into the top-400 category over a two decade period, then there must be some very incompetent rigging going on. But in most discussions of income there is no thought given to the fact that most Americans are going to be in multiple income brackets over their lifetimes. So the New York Times can talk about “the favored fifth at the top.” But 75 percent of Americans are going to be in the top fifth of income earners during their lifetime. So there is no favored fifth. Now, you could say there is the favored 75 percent, but they are not getting their income as a favor, they are working for it.

An error of commission involves lumping data together on things that are fundamentally different. In recent years there has been a renewed attempt to discredit the idea that the minimum wage causes unemployment. And the latest attempt at this, conducted by Princeton economists, involves calling businesses before the minimum wage goes into effect and asking how many employees they have. Then the economists call back after the minimum wage goes into effect, they find that there is no big difference in the number of employees, and they conclude that the minimum wage has no impact. In the book I show how you could apply that methodology to whether Russian roulette is dangerous. If you had a list of people who had played Russian roulette and you sent them questionnaires and they filled them out and sent them back, you would find that nobody was harmed at all. And you’d conclude that Russian roulette is one of the safest activities we can engage in—we can even have it in the public schools! Of course, the ones for whom it was dangerous are no longer around to answer questionnaires. You have exactly the same problem with minimum wage studies of that sort. In any given industry, you have a mix of companies that are not identical. Some are very profitable, some are less profitable, and some are struggling to hang on. You plug in the minimum wage and one of the outcomes is that the companies struggling to hang on no longer win that struggle. There are several empirical studies showing that happening in Seattle and San Francisco, for example. If you look at the restaurant industry, the most important effect when you impose a minimum wage is that the number of restaurants decline. Now, people don’t stop going to restaurants because some of them close. They go to the surviving restaurants, and those restaurants may have just as many employees as they have ever had. But those are the only restaurants you can survey after the minimum wage goes into effect. That’s the inherent flaw of survey research.

Another problem that is often overlooked is that the minimum wage can reduce the quantity of labor demanded not only by having fewer jobs but by having those with jobs work fewer hours. A study by the National Bureau of Economic Research found that is indeed what happened with a recent increase in the minimum wage. That particular study showed, I think, that those workers lost an average of $125 a month. So a law that is supposed to help the poor not only causes them to lose their jobs but also causes those who keep their jobs to earn less than before.

Hogberg: Late in the book you write, “‘Solutions’ can be a society’s biggest problem—and especially governmental ‘solutions’—because government is essentially a categorical institution in an incremental world.”

In private life, by contrast, we make incremental decisions all the time. A little bit more of this, a little bit less of that, and so on. If you suddenly have a hospitalization bill, well maybe you won’t take that vacation or buy that new car this year. Government seldom makes trade-offs like that. Politicians say, “This need has arisen, so we need to raise taxes.”