The One True Puerto Rico Death Toll and Other Fictions 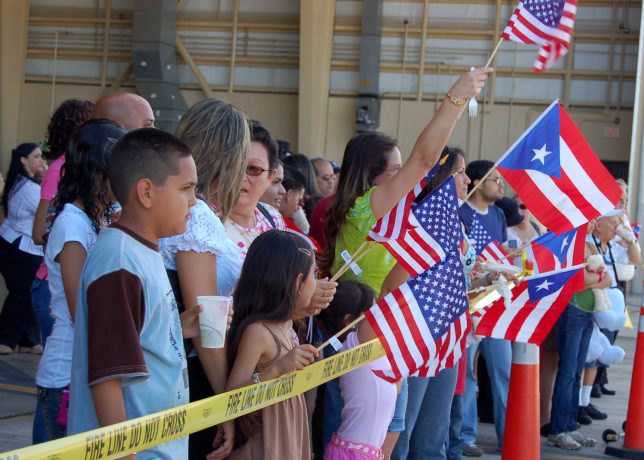 Family, friends and coworkers welcome home 26 members of the 198th Airlift Squadron on their return home to Muñiz Air National Guard Base, Puerto Rico, Dec. 16. The unit returned from a deployment to Bagram Air Base, Afghanistan. The unit is part of the 156th Airlift Wing of the Puerto Rico Air National Guard. (U.S. Air Force photo/Louis A. Arana-Barradas)
by Dr. Steven J. Allen

This article originally appeared in American Greatness on September 21, 2018.

How many people died in Puerto Rico as a result of Hurricane Maria?

The one, true, absolutely correct answer is 2,975. We know that one is correct because it is the answer accepted by the Puerto Rican government, which, you may be certain—certain!—is interested only in the truth and not in the aid that comes with larger numbers.

There are 64 actual confirmed deaths—people whose names are known. President Trump, ever the skeptic, tweeted that the increase in the official count from 64 to 2,975 was “done by the Democrats in order to make me look as bad as possible.”

Trump’s comment showed he “lacks even a tangential relationship with reality,” according to Washington Post columnist Jennifer Rubin, while Max Boot wrote that it exposed his “debilitating weakness for conspiracy theories.” Reporter John Heilemann, appearing on “The Late Show with Stephen Colbert,” called Trump “the first Puerto Rico truther.”

What some don’t seem to understand is that there were lots of estimates done by experts—estimates that, for the most part, have some basis in fact. But it was Democratic politicians and their allies who decided that the 2,975 number was the ultimate truth and who rejected other, valid numbers.

The increase in the death toll estimates, PolitiFact reported, “is based in science.” Well, kinda. The problem is that the larger numbers that experts produce vary wildly depending on the criteria that are used. Within an extremely wide range, you can get almost any number you want.

Do you count just the deaths that occur directly—people who, say, drown in a flood resulting from a hurricane? How about people in nursing homes who die due to a lack of air conditioning, or people who fall victim to the post-disaster spread of infectious disease? How about when an ambulance fails to arrive in time, due to cellphone service and roads being out? Or murders and suicides? How long is the period in which deaths are counted? Do you count deaths before the event, such as when someone is killed while fleeing an approaching storm? How about people who vanish, their bodies swept out to sea or yet-unfound in isolated locations?

It’s a variation of what’s called the Coastline Problem.

As noted in Popular Mechanics, the coastline of the United States is 19,924 miles (CIA), 29,093 miles (Congressional Research Service), or 95,471 miles (National Oceanographic and Atmospheric Administration). All those answers are correct, depending on the criteria used for the measurement.

Measure the British coastline in 100-kilometer units, and the length is 2,800 kilometers. Measure it in 50-kilometer units, the length is 3,400.  Mental Floss magazine explained that a coast is “made up of divots and curves that start to multiply the closer you zoom in on the map.” The smaller the unit of measurement, the more nooks and crannies you measure.

Another problem: the Clever Hans effect.

Around 1904, Clever Hans was a stallion famous for his abilities to do math, tell the time, and spell—answering questions by tapping his hoof. Alas, it turned out that Hans was picking up on unconscious cues from his trainer. As Hans neared the correct answer to a question, the trainer would relax his facial expression and his posture, which signaled Hans to stop tapping.

When the commonwealth government estimated 64 deaths, that was seen as too low. As the New York Times reported: “Under pressure, the government announced in December that all deaths that occurred after Maria hit would be reviewed and that people who died either directly or indirectly from the storm and its aftermath would be included in a revised tally.” Governor Ricardo Rosselló commissioned a new count. The number came in at more than double the previous estimates by news organizations and academics, and the governor signed an executive order updating the death toll.

Like Clever Hans, everyone kept tapping out numbers until they got to the one that was correct—in this case, politically correct—one that, absurdly, put Hurricane Maria’s toll in Puerto Rico at two fewer than the toll of the 9/11 attacks.

The re-calculators who came up with 2,975 used a method in which they compared the number of deaths following the hurricane to the number that would have been expected during that period. Allow me to illustrate a problem with that technique: According to the CIA Factbook, the death rate in Puerto Rico was 7.75 per thousand in 2009, the year Barack Obama took office. It rose the following year, and each of the six years after that. Taking 2009 as a baseline, there were 279 “excess deaths” in 2010, a number that rose each year, reaching 3,767 “excess deaths” in 2016. In total, during 2010-2016, Barack Obama’s presidency killed 13,583 Puerto Ricans.

Of course, that’s not true. In the previous paragraph, I used real statistics to come to a result that was a lie.

See how easy it is?