The New Rallying Cry for Women on the Left 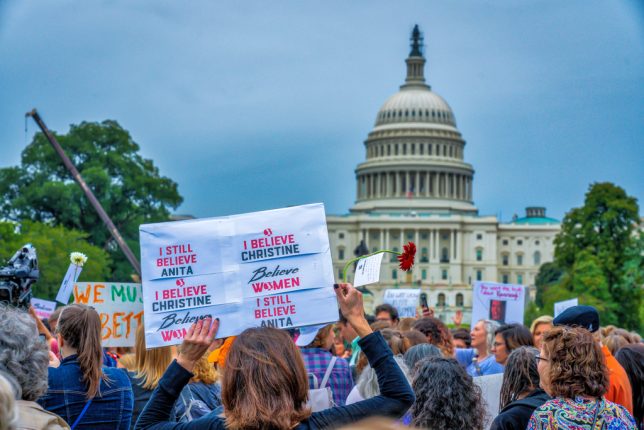 Democratic feminists energized by the waves of the #MeToo and #TimesUp movements have a new organization to help channel outrage and enthusiasm against President Donald Trump and the Republican Party. Democratic women have become more politically vocal in recent years, with movements like the Women’s March, #MeToo, and recent protests to block Justice Brett Kavanaugh’s confirmation to the Supreme Court. Many women opposed Kavanaugh’s confirmation due to allegations he committed sexual assault and because they see him as a threat to Roe v. Wade. Several Democratic Party women believe their views on abortion and gender equality are not being reflected in government and that women need equal representation throughout Congress.

A new political action committee, Elect Democratic Women, supports Democratic pro-choice female candidates for office. The PAC makes donations and spends money on female candidates within the Democratic Congressional Campaign Committee’s (DCCC) “Red to Blue” program, which aims to win the majority in Congress for the Democratic Party, while also closing the gender gap in politics. Representative Lois Frankel (D-FL), chair of the PAC, said, “Diversity is a cornerstone of our democracy, and right now only 20 percent of Congress is female. We need our elected officials to better reflect our country and we can do that by electing more women . . .” The PAC employed Mothership Strategies, a Democratic Party-aligned digital strategy firm, to implement online fundraising strategies to support Elect Democratic Women’s chosen candidates.

Justice Kavanaugh’s confirmation serves as an interesting case study. A poll conducted by the Morning Consult/Politico (Sept. 20-23) shows only about 27 percent of all women voters believed that Kavanaugh should be confirmed, as compared to 42 percent of all male voters. The significant divide between male and female voters, with respect to which candidates they would support in light of growing concerns regarding sexual misconduct, seems to be an increasingly important issue for the 2018 midterms. Even though Republican Party candidates who support the confirmation of Kavanaugh are unlikely to lose Republican women voters, undecided women could tip the scales.

Would it be fair to say that Elect Democratic Women attempts to exploit this wave of feminism for political purposes? Absolutely.

Mikie Sherrill, an Elect Democratic Women-endorsed candidate running for U.S. Congress in New Jersey’s 11th district, accused her Republican opponent, Jay Webber of supporting an anti-woman agenda. Webber opposed a bill that called for equal pay for men and women doing “substantially similar” work. But that’s because Webber has represented numerous women as their counsel in disputes with their employers (outside his capacity as an elected official). Based on his experience, he feels the equal pay bill would largely benefit lawyers who spend billable hours litigating the meaning of the term, ultimately providing little to no real support for women in unfair pay situations. At the same time, the bill would punish small businesses in settlements and litigation costs. Webber voted no on the equal pay legislation, instead believing a more effective proposal could protect women in the workplace from unequal wages.

…against biased judges who might gut our reproductive rights. If you care about these rights as well as voting rights, workers’ rights, and more, vote this November. #KavanaughSCOTUS

Clearly, Underwood wants women to be concerned with protecting abortion rights and hints that Kavanaugh would completely overrule Roe v. Wade. On the contrary, Brett Kavanaugh stated that Roe v. Wade should be considered an “important precedent.” Rather than overturn the decision, he most likely would permit stricter regulations on abortion. Underwood’s careless assumptions are less about accurate interpretations of jurisprudence and more about playing to the current political climate.

Another candidate endorsed by the PAC, Katie Hill, who is running for U.S. Congress in California’s 25th district, commented on Brett Kavanaugh’s nomination even before the hearings and investigations had concluded, tweeting:

We’re talking about putting a serial predator up for a lifetime appointment in the highest seat we have in the U.S. That can’t happen.

Hill called voters to action, hoping to gain traction with the 34 percent of women voters who were unsure about confirming Kavanaugh.

Elect Democratic Women is exploiting the Republican Party’s perceived weaknesses on gender issues, hoping this strategy will help the Democrats gain ground not only in the 2018 midterm elections but also in future election cycles. But at the end of the day, it will be election results which indicate if this is a viable long-term political strategy.