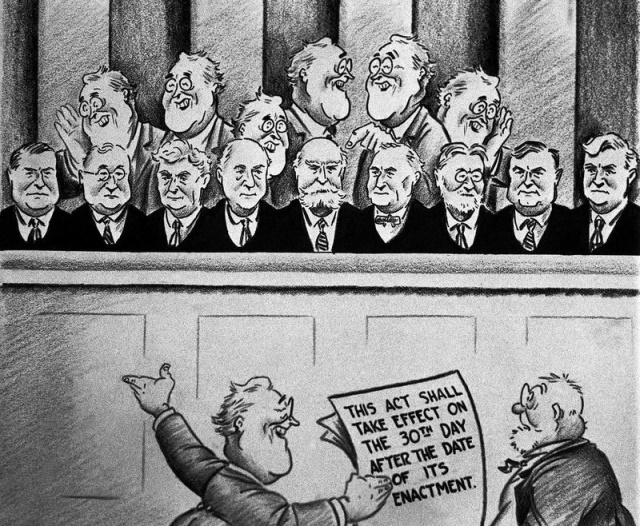 An uncomfortable political reality that grows more obvious by the day is that the progressive left is developing a taste for bullying tactics. Look no further than Democratic senator Kyrsten Sinema’s filmed harassment in a bathroom at Arizona State University because she did not support all parts of President Joe Biden’s Build Back Better agenda. Biden, when asked about the harassment, said it was merely a “part of the process.”

It’s not just legislators, either. American institutions that are relatively apolitical are not being spared in this new inquisition. The Supreme Court, designed to stay out of the political fray, tends to favor dispassionate devotion to the law. Attempts to intimidate it have ramped up in recent years as leftists who dislike the recent additions to the bench fear they may take the court in a more conservative direction.

But, we’ve been here before. In 1937, President Franklin Delano Roosevelt was frustrated by the Supreme Court striking down parts of the New Deal he believed would help pull the country out of the Great Depression. In response, he proposed adding up to six new Supreme Court justices and imposing age restrictions as well. Roosevelt was thwarted in his court-packing scheme by, among others, proponents of religious liberty. In 2007, W.G Ross explained in the Journal of Law and Religion that “religious issues and clergy played a prominent and now largely forgotten role in the defeat of President Franklin D. Roosevelt’s controversial 1937 proposal to add six justices to the U.S. Supreme Court.”

Today, the country may once again have defenders of religious liberty to thank for saving the Supreme Court from corrupt politics.

On one side of this conflict are people like Sen. Sheldon Whitehouse and lefty “dark money” groups like Demand Justice, which is tied to the massive leftist funding network Arabella Advisors. Led by former Hillary Clinton speechwriter Brian Fallon, Arabella was key in helping organize and fund the vitriolic smear campaign against Brett Kavanaugh during his 2018 confirmation hearing.

Becket Fund president Mark Rienzi noted in a presentation previewing the 2021 term that the 2020 rulings related to the coronavirus lockdowns—including the Becket Fund’s win in Roman Catholic Archbishop of Washington v. Bowser, in which they convinced a federal judge to lift an arbitrary 50-person attendance cap—suggested that the justices are intent on making equal treatment of religious entities a priority.

Roger Severino, a senior fellow at the Ethics and Public Policy Center who served under Trump as the director of the Office of Civil Rights at the Department of Health and Human Services, said that this probable prioritization of religious liberty is at least partially responsible for the resurrection of a court-packing scheme.

“The left’s court-packing fever is due primarily to their obsession with keeping abortion policy from being decided by the people and their elected representatives,” Severino said. “But it is also true that the left is quite hostile to religious freedom wherever it is in tension with aggressive abortion or LGBT policies, which are multiplying by the day under Biden.”

Severino says the protection of religious liberty, even on a court divided by radically different judicial philosophies, speaks to something that transcends the politics of the day and goes to the core of American principles: religion is good for the republic.

“Unlike Justice Sotomayor and the late Justice Ginsburg, liberal Justices Breyer and Kagan recognize the good that religion provides to the republic and are more open to respecting its place in our history,” Severino says. “This sensitivity helps explain why they join the conservative Justices and the Chief Justice from time to time on religious freedom cases.”

One would think that this kind of unity—something President Biden called for in his inaugural address—would be appealing to all Americans. But in a recent speech at the University of Notre Dame Law School, Justice Samuel Alito noted recent efforts to politicize SCOTUS’s orders list (expedited rulings not requiring a full briefing), which has never before been deemed controversial. The orders list is being called a “shadow docket” and used by the progressive left to insinuate the now originalist-leaning court is working to further a dark conservative agenda.

“This picture is very sinister and threatening, but it is also very misleading,” Alito said. “There is nothing, absolutely nothing new about emergency applications [but] the catchy and sinister term ‘shadow docket’ has been used to portray the court as having been captured by a dangerous cabal that resorts to sneaky and improper methods to get its way. And this portrayal feeds unprecedented efforts to intimidate the court or damage it as an independent institution.”

For proof, look to Senator Whitehouse’s social media accounts, where he barely goes a day without fevered accusations against what he calls “the scheme,” a conspiracy led by corporations to control the courts using conservative “dark money” groups that spend millions on ads and push for cases that will promote their political agenda. How Senator Whitehouse squares this supposed bias with the proliferation of religious liberty cases in which the justices have agreed is yet to be asked or answered.

But Whitehouse et al. continue to push for SCOTUS reform, up to and including adding justices. President Biden, once disdainful of court packing, has warmed to the idea. In April, he created a commission by executive order to study the structure of the Supreme Court and “to provide an analysis of the principal arguments in the contemporary public debate for and against Supreme Court reform, including an appraisal of the merits and legality of particular reform proposals.”

If successful, the left’s court-packing scheme will set up a protracted battle that will only exacerbate once a Republican is back in office, says Severino.

“If Biden packs the court until he reverses religious liberty, the next Republican president would pack the court until it is restored,” Severino warns. “Court packing would set off a judicial arms race that would spell the end of the neutral rule of law.”

This article originally appeared in the November/December 2021 issue of the American Conservative.