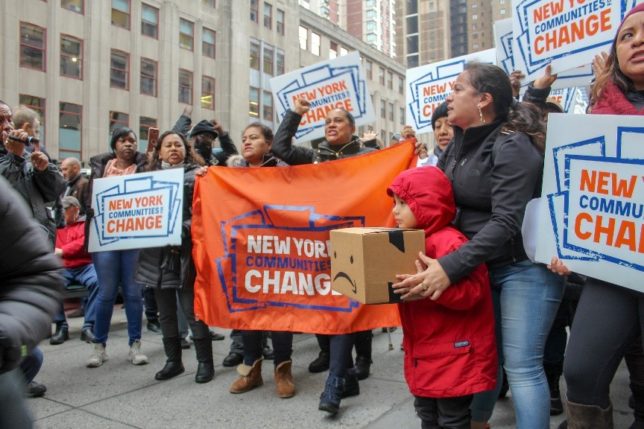 According to tax filings from 2016, Legal Services NYC provided nearly $140,000 to New York Communities for Change, a left-wing activist group whose mission is to “RESIST fascist and racist policies." Credit: VOCAL-NY. License: https://bit.ly/2MJLdZt.
by Robert Stilson

The tradition of agenda-driven advocacy among LSC-funded legal aid nonprofits, while perhaps not as brazen as during Hillary Clinton’s leadership, continues to this day and manifests itself across a number of hot-button issues.

Tenants’ interests form a major part of many LSC grantee services, and the attendant litigation often places them in direct opposition to the interests of property owners seeking new construction, investment, and revitalization. Legal Services NYC, a grantee based in New York City that has averaged over $12 million in annual LSC funding in recent years, intervened against a 2019 challenge to New York’s extensive (and recently expanded) system of rent controls. (Rent controls are widely understood to exacerbate problems they are supposed to address by driving up market-based rents and disincentivizing new construction and investment.) The Legal Aid Foundation of Los Angeles, recipient of over $32 million in LSC funding from 2014 to 2018, worked for a Long Beach City ordinance that would require landlords to pay tenants up to $4,500 if the tenant moves out because the landlord increased rent by more than 10 percent or decided to renovate the property.

Homelessness is also an issue that has pitted LSC grantees against local governments and city residents. The Legal Aid Foundation of Los Angeles has filed a number of suits on behalf of that city’s exploding homeless population—suits that many see as frustrating efforts to deal with the crisis. A recent case settlement prevents local government from limiting the belongings that a homeless person can have on public streets, making it much harder for the city to clean up the mountains of debris that have turned parts of Los Angeles into a rat-infested “typhus zone.” The Legal Aid Foundation filed an expanded lawsuit on the same issue just months after the settlement. Critics contend that such suits only entrench “the status quo of people living on the street” and keep “the City’s hands tied from properly managing our sidewalks.” LSC grantees in other cities in California as well as in Washington and Florida have brought similar litigation.

Other examples abound. Legal Services NYC publishes an immigration guide that urges only minimum cooperation with authorities and explicitly advises immigrants not to “carry any documents about your country of origin.” It also came out in support of a lawsuit challenging the Trump Administration’s new regulatory guidance on the Public Charge Rule, a rule designed to ensure that certain immigrants are unlikely to become dependent upon public aid programs after they are admitted to the United States. Indiana Legal Services, which was 74 percent funded by the LSC in 2018, recently filed suit challenging that state’s new 80-hour-a-month work, education, or volunteer requirement for Medicaid recipients, with a similar lawsuit supported (though not filed) by a LSC grantee in Arkansas. Bay Area Legal Aid, which serves the San Francisco region and was 25 percent LSC-funded in 2018, helped represent the plaintiffs in a case that ended Solano County’s practice of suspending drivers’ licenses over unpaid traffic fines.

Some LSC grantees even become “grantee-plaintiffs” through their litigation. A grantee-plaintiff is an organization that receives federal grant money and then sues the federal government, placing the taxpayer in the position of subsidizing both parties to a lawsuit. A recent example is a lawsuit filed by Texas RioGrande Legal Aid (40 percent LSC funded in 2018) against the U.S. Department of Housing and Urban Development (HUD) alleging racial discrimination in how Hurricane Harvey aid was being distributed because the aid programs treat property owners and renters differently, and renters are disproportionately minorities. Grantees can also formally oppose federal priorities without litigation; Legal Services NYC recently filed public comments opposing HUD’s proposed revisions to the Fair Housing Act’s Disparate Impact Rule, a rule that addresses liability for housing practices that have no discriminatory intent but nevertheless disproportionately affect a particular group of people.

In the next installment of Legal Services Corporation, find out its questionable grants to politicized nonprofits.