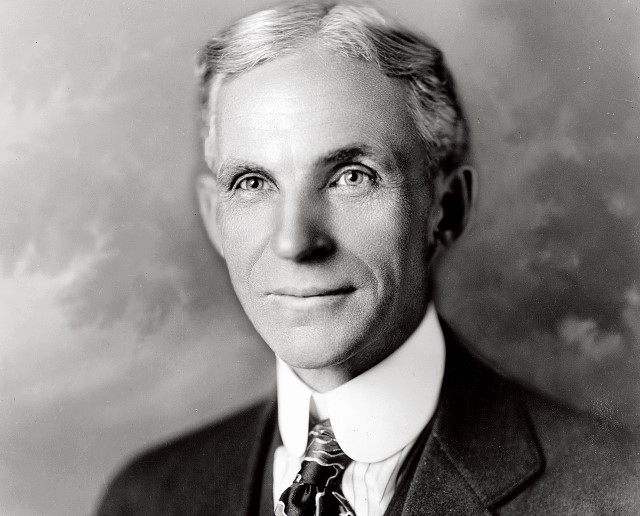 Henry Ford may have died in 1947, but the fortune he built has lived on—with other people spending it—at the Ford Foundation. License: Public domain.
by Ken Braun

Summary: Sen. Sheldon Whitehouse (D-RI) has tried to make his reputation policing so-called “dark money.” The Ford Foundation gives well over $100 million per year to programs that advance policy and political wins for the Left and Democratic politicians, yet Whitehouse recently claimed it “doesn’t seem to have much in the way of a political motive or purpose.” Funded with Henry Ford’s fortune and now worth more than $12 billion, today’s Ford Foundation is run by people almost nobody knows and funds things ole Henry would almost certainly disagree with. How much darker does money get?

Michael Bloomberg ranked fourth on a recent Forbes list of “The 25 Philanthropists in America Making the Biggest Donations.” One of several billionaires with a well-known bias for left-wing causes, Forbes noted Bloomberg’s bucks had been “especially active on the issues of gun control, public health and climate change; the latter has included efforts to shutter coal-powered plants in the U.S.”

The Forbes list did not include Ford Motor Company founder Henry Ford, even though Ford’s recent philanthropic footprint slightly exceeded Bloomberg’s. He may have died in 1947, but the fortune Henry built has lived on—with other people spending it—at the Ford Foundation. And, though likely contrary to what ole Henry would have wanted, the foundation also been one of the biggest benefactors of left-leaning causes for more than half a century.

It has been a long time since the hefty-lefty influence of Henry Ford’s money has received anything but indifferent to non-existent attention from conventional media. It is a secret so well concealed that even a major left-leaning politician who benefits from the agenda—Sen. Sheldon Whitehouse (D-RI)—can get away with professing no knowledge it.

To deploy one of Whitehouse’s favorite phrases, one might call it “dark money.”

In an April 2021 appearance on the Strict Scrutiny podcast, Whitehouse fielded softball questions from two law professor hosts about his oft-repeated assertion that free market and right-leaning donors have too much influence over the selection of U.S. Supreme Court nominees.

This was also the subject of a March 10 Senate hearing chaired by Whitehouse. But the performance didn’t go well for him. Witnesses such as the Capital Research Center’s Scott Walter provided overwhelming evidence that the agenda of the Ford Foundation and many other monster donors on the left swamps everything Whitehouse could be concerned about from the right.

After this debacle, according to the Strict Scrutiny podcasters, Whitehouse’s staff “reached out” for an opportunity for him to appear on the show. The whiff of damage control by Senate staffers was hard to miss.

At several points in the discussion with the professors Whitehouse tried to deny that the Left spends activist bucks to influence Supreme Court confirmations. The charade reached its climax when the senator described the Ford Foundation as an “amazingly well-established public interest foundation that doesn’t seem to have much in the way of a political motive or purpose.”

Since 2016 the Ford Foundation has given at least $22.4 million in total donations to the Center for American Progress, the Alliance for Justice, and the Leadership Conference Education Fund. All three of these left-leaning recipients took public stands and actions in recent years against the confirmation of President Donald Trump’s three Supreme Court nominees.

And they were just a few drops in a vast bucket of lefty cash flowing from the Ford Foundation. For a five-year period beginning in 2016, records kept by the charitable recordkeeping service FoundationSearch show the Ford Foundation gave a minimum of $604.8 million to support more than 100 other organizations that clearly favor Democratic successes and left-leaning policy outcomes.

This is a very generous, low-ball estimate. Many millions of dollars given to universities are excluded, even though there was justification for including many of them. For example, the Ford Foundation’s description of a $400,000 grant to Rutgers University reads “For the Gloria Steinem Endowed Chair and Program Fund in Media Culture and Feminist Studies which will examine the relationship between media and the promotion of democratic participation.”

Similarly, the estimate of Ford’s lefty funding also excludes single-issue organizations narrowly focused on social or civil liberties issues. For example, the estimate does not include $6.5 million given to Planned Parenthood over the preceding five years or the $350,000 Ford sent to NARAL. Both are pro-abortion organizations that for decades have been reliable and severe opponents of Supreme Court nominees chosen by Republican presidents. Similarly, the estimate also excludes grants given to organizations such as the American Civil Liberties Union Foundation ($4.7 million), the NAACP ($825,000), and the Migration Policy Institute ($5 million).

In the next installment, review how the Ford Foundation abandoned its principles.