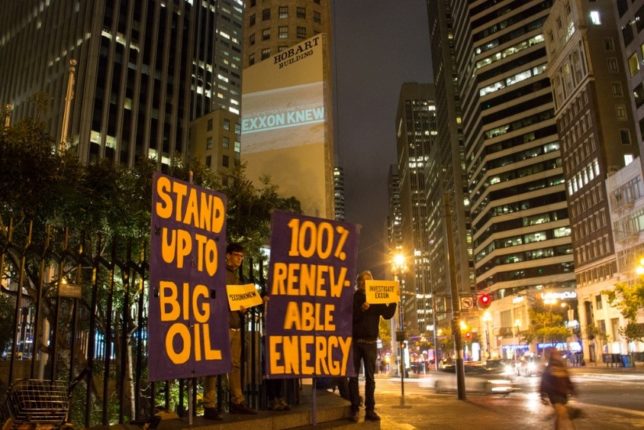 Summary: Many left-wing foundations in the U.S. support overtly political causes in the name of “philanthropy,” spending tens of millions of dollars each year pushing an environmentalist agenda. But one of these “green” mega-funders shells out its millions from the seclusion of its headquarters in Switzerland—far beyond the reach of IRS disclosure rules. Meet the Oak Foundation, the Left’s “green giant.”

The Oak Foundation has committed $100 million to “climate justice” programs to be spent between 2015 and 2020. Oak has pledged a whopping $75 million over five years to ClimateWorks Foundation, a frequent Oak grant recipient, for “climate change mitigation” and another $20 million to the Climate Justice Resilience Fund, which seeks to indoctrinate developing countries in Africa and Asia with “climate justice” schemes.

Another recipient of Oak Foundation grants is EarthRights International, a Washington, D.C.-based legal nonprofit. EarthRights represents two key clients in Colorado—the city and county of Boulder and San Miguel County—involved in a climate liability lawsuit against ExxonMobil and Suncor. According to FoundationSearch, the Oak Foundation USA has given $360,000 in grants to EarthRights since 2008.

But perhaps the most disturbing example of the Oak Foundation’s funding is its support for a campaign to promote climate change litigation in Canada.

In January 2019, the British Columbia capital of Victoria endorsed filing a class-action lawsuit against multiple fossil fuel companies in Canada and abroad alleging damages from climate change. The proposed lawsuit would seek compensation for municipal “climate adaptation costs” supposedly resulting from energy companies’ greenhouse gas emissions. The Victoria government has since called on other Canadian cities to join the proposed lawsuit.

The endorsement, a first in Canada, follows a string of climate change policies enacted by the Canadian government in recent years, including a carbon tax implemented in April. Depending on where individuals live, the tax is estimated to cost consumers as much as $1,120 more in annual energy bills.

In November 2018, the mayor of the ski resort town of Whistler, British Columbia, sent letters to 20 oil and gas companies demanding they “commit to pay[ing] a fair share of the costs of climate change being experienced by Whistler.” Those “costs” reportedly included estimates of low snowfall in future years, which the mayor blamed on climate change.

As it turns out, Whistler and Victoria aren’t alone: another 18 Canadian cities have sent similar letters to energy companies since mid-2017.

Orchestrating the campaign against oil and gas producers is West Coast Environmental Law (WCEL), a nonprofit legal advocacy group created in 1974 and headquartered in Vancouver. According to the group’s website, WCEL is supported by grants from the Oak Foundation, the Moore Foundation, the Wallace Global Fund, and the Tides Foundation, a San Francisco-based mega-funder.

As it turns out, the Oak Foundation gave a grant of $100,000 in 2015 to West Coast Environmental Law “to support the emergence of a public and legal narrative that fossil fuel companies and other large-scale greenhouse gas producers in the U.S. should pay compensation for the damages caused by their productions and operations” (emphasis added).

Did Oak help orchestrate the global warming litigation campaign? That’s debatable—but because Oak is primarily housed outside the U.S. it’s difficult to track most of its spending. In its latest annual IRS filing, for example, the Oak Foundation USA reported net assets of $60.7 million at the end of 2017 and disbursements of $7.7 million. It’s Swiss counterpart, meanwhile, reported spending $200 million that same year.

The massive discrepancy between the finances reported by the Oak Foundation in Switzerland and the Oak Foundation USA strongly suggests that the group only apportions a small segment of its funding to its American arm, where it would be subject to the strict IRS public disclosure rules. Sadly, the climate change litigation campaign won’t benefit the environment—but it will line the pockets of the lawyers at West Coast Environmental Law.

The Future of Climate Litigation

The kind of climate change litigation threatened in Canada and the United States ought to concern anyone who supports cheap and abundant energy. So long as compliant politicians in both countries are willing to advance specious allegations against oil and gas companies, there will continue to be a market for foreign-financed judicial mischief—particularly in the form of grants from the Oak Foundation.

But now there are rising voices of dissent in both the U.S. and Canada which suggest that the political class is not nearly as united around litigation strategies as it once was.

In April, Toronto city councilman Mike Layton was rebuked after introducing a motion that would require the city to calculate the costs of damage from climate change which could then be folded into a legal assault on energy companies. Jason Kenney, the United Conservative Party candidate for premier of Alberta, sent a letter to Toronto Mayor John Tory denouncing the motion.

“I am writing to ask that you and [the] Toronto City Council oppose Councilor Layton’s motion that seeks to pin responsibility for the global challenge of greenhouse gas emissions on Canada’s oil and natural gas producers through a lawsuit,” Kenney wrote. “This motion is injurious to national unity, is divisive, and would be damaging to Canada’s economy.”

It’s not hard to understand where Kenney is coming from. Alberta is home to Canada’s oil and gas industry, and the area is reeling from insufficient pipeline development.

In the U.S., state attorneys general who have joined with environmental activists to pursue what can best be described as shakedown campaigns against oil and gas companies are now running scared from open records requests. That’s ironic, considering that the state government attorneys who were part of what became known as the #ExxonKnew campaign have long accused ExxonMobil and other oil and gas companies of deliberately misleading their shareholders and the public about the dangers of climate change. But now it’s the state attorneys general who appear to be concealing information that would provide insight into their relationships with narrow, well-funded special interests.

Chris Horner, an attorney with the public interest law firm Government Accountability and Oversight who has also worked with the center-right Competitive Enterprise Institute, has filed open records requests lawsuits against complicit attorneys general in Virginia and Maryland.

Horner’s suits seek to shake loose information that would likely reveal what the government attorneys promised to deliver to environmental activists in exchange for receiving private support from Michael Bloomberg, a billionaire climate activist and former mayor of New York City.

Bloomberg has funded a program through the New York University School of Law which places attorneys in the offices of state attorneys general who then pursue legal action against energy companies. How legal and ethical these Bloomberg-funded arrangements are remain open questions.

At least the Bloomberg funding comes from a source inside the United States. The $1 million grant from the Oak Foundation to the Washington, D.C.-based Center for International Environmental Law—whose board includes Matt Pawa and Sharon Eubanks—is another matter.

In the conclusion of The Left’s Green Giant, learn how the Oak Foundation fits into a larger international network of climate change activists.