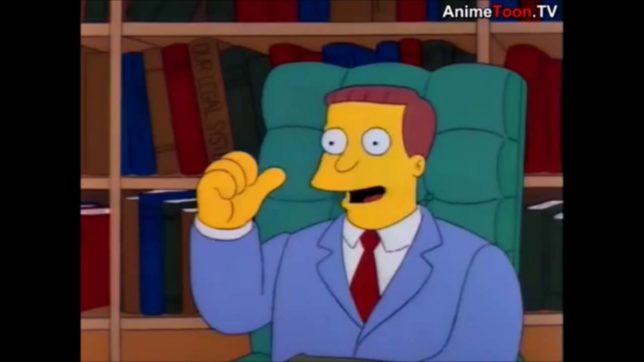 “Mr. Simpson, this is the most blatant case of fraudulent advertising since my suit against the film The NeverEnding Story.

Jokes aside, the public does hold a rather mixed view of the legal profession. One recent Gallup poll found that only 19 percent of respondents felt that lawyers had high or very high standards of honesty and ethics, while 30 percent felt that the profession’s standards were either low or very low. A net –11 points for attorneys isn’t particularly good. Nurses were rated at +78, police officers at +38, and bankers at +7, for instance. But lawyers still trounced politics in the public’s perception. Members of Congress were rated at –53, while lobbyists bottomed out at –58.

On the one hand, blanket judgments like these are always unfair to the scrupulous professionals who populate every line of work, lawyers and lobbyists of all stripes included. Honesty and ethics are traits found in individuals, not categories. At the same time, it is worth asking why people think the way they do. What do they see that they don’t trust? It certainly seems reasonable to assume that many associate both professions with efforts to use public institutions to secure private advantages—for their clients, for themselves, or both—potentially to the detriment of others or the public at large.

Thinking about lawyers and special interests in this manner leads to an interesting question: What happens when the lawyers are themselves the special interest? The collective influence of the plaintiffs’ trial bar—what its critics have variously called the “Lawsuit Lobby,” the “Trial Lawyer Underground,” and “Trial Lawyers, Inc.”—provides an interesting vehicle for examining how those who fight for their clients in the courtroom also fight for themselves outside of it. And their efforts have implications for our entire civil justice system.

Americans sue one another a lot, and they spend a great deal of money doing so. Millions of civil cases are filed in state courts every year, and hundreds of thousands more get docketed in federal court. In 2016, the Manhattan Institute reported that “the direct costs of tort litigation alone are roughly one-tenth the entire health care sector.” In 2010, economist Paul H. Rubin wrote in the New York Times that as the world’s most litigious society, the United States was spending the equivalent of 2.2 percent of its gross domestic product—about $310 billion—on tort litigation. Approximately half of that total was due to transaction costs (mostly legal fees) rather than damages actually recovered by plaintiffs.

Mass torts—where a defendant allegedly harmed large numbers of plaintiffs, generally in a personal injury context—can be aggregated into gigantic federal multidistrict litigation (MDL), with the goal of streamlining large numbers of similar claims so that certain efforts are not duplicated across each individual case. A 2021 report released by the U.S. Chamber of Commerce Institute for Legal Reform noted that approximately two-thirds of all private civil cases that were pending in federal court were part of such multidistrict litigation. Legal scholars have commented that it has “quietly revolutionized civil procedure.”

Many have no doubt become familiar with multidistrict litigation—even without realizing it—through media reports about the ongoing litigation over combat earplugs manufactured by 3M and issued to many U.S. military service members from 2003–2015. In what has become the largest multidistrict litigation in history, 3M is facing approximately 230,000 claims that the earplugs were defective and led to hearing damage for veterans who used them. Trials, appeals, and negotiations are proceeding along multiple tracks, and there is substantial uncertainty surrounding the size of any potential future settlement, with numbers ranging from $1 billion to $100 billion and everything in between.

As its prominence within the federal court system has increased, multidistrict litigation has also attracted some criticism. Some have raised concerns with how marginal or even meritless cases can be mixed in with legitimate ones when defendants are hit with so many lawsuits at the same time. 3M has contended that this is the case with the litigation over its earplugs. The Institute for Legal Reform has argued that, while multidistrict litigation was “historically . . . an efficient way of handling the pretrial phase of large numbers of similar lawsuits,” it has since become a vehicle for plaintiffs’ lawyers “to litigate questionable or meritless claims hoping that the sheer number of cases will pressure defendants to settle.”

Scrutiny has also focused on who actually benefits from multidistrict litigation. University of Georgia Law Professor Elizabeth Chamblee Burch has conducted some of the more interesting research on this topic. Her 2019 book Mass Tort Deals: Backroom Bargaining in Multidistrict Litigation makes the case that the current system fosters an environment in which “plaintiffs’ lawyers may sell [their clients] out in backroom settlements that compensate lawyers handsomely, pay plaintiffs little, and deny them the justice they seek.” Burch and Margaret S. Williams of the Federal Judicial Center had elsewhere examined how a relatively small group of individual attorneys were disproportionately being appointed to lead multidistrict ligation. That is, in the words of a Reuters article covering the research, “a handful of plaintiffs’ lawyers dominates MDL litigation.”

The two have also attempted to measure plaintiff sentiment towards their multidistrict litigation experience. A survey of over 200 participants found that 64 percent were somewhat or extremely dissatisfied with how their lawyer handled their case. Half did not feel like “I could trust my lawyer to act in my best interest,” with a remarkable 37 percent strongly disagreeing with that statement. Survey participants reportedly also “had much to say about fees”: 10 percent thought that their attorney’s fees were reasonable, while 60 percent felt that they were unreasonable, including more than 40 percent who considered them “extremely unreasonable.” One participant, for example, was billed $575 for her lawyer’s steak dinner, $5,000 for his private aircraft, and $6,630 in interest charges.

Lawyers’ fees in multidistrict litigation can certainly be substantial. A pair of settlements in 2004–2005 with Johnson & Johnson over the drug Propulsid were valued at over $70 million, but only 37 of the more than 6,000 claimants who participated in the settlement program received any money—a little more than $6.5 million total. The lead plaintiffs’ lawyers in that case, who had negotiated their fees directly with Johnson & Johnson, received $27 million. After conducting their survey of plaintiff experiences, Burch and Williams wrote simply that the multidistrict litigation system “needs reform” for the way that it undermines “fundamental tenets of due process, procedural justice, attorney ethics and tort law.” The proper goal of any such reforms, according to Burch, “isn’t to eliminate these lawsuits; it’s to save them.”