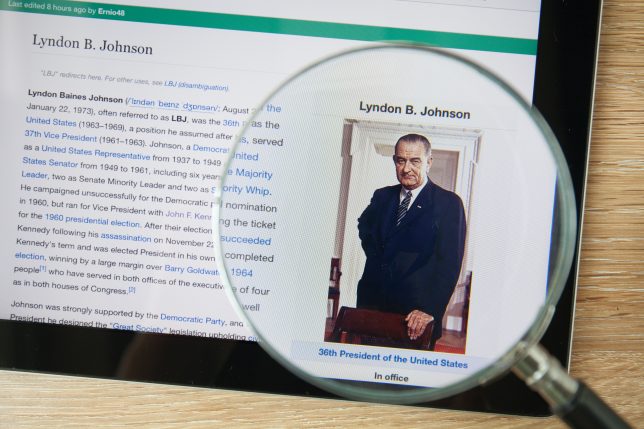 Originally published in The Daily Caller in October 2016.

Donald Trump has promised plenty this election cycle: Economic growth, border security, and a stronger America abroad. But one of his campaign promises escapes mainstream media coverage, despite its broad implications.

But what exactly is the Johnson Amendment? Proposed by then Senator Lyndon B. Johnson (D-TX) and passed by Congress in 1954, the law prohibits tax-exempt organizations—including churches and other nonprofits—from lobbying elected officials, campaigning on behalf of a political party, and supporting or opposing candidates for office. Section 501(c)(3) of the tax code bestows tax-exempt status upon nonprofit groups as long as they don’t “participate in, or intervene in (including the publishing or distributing of statements), any political campaign on behalf of (or in opposition to) any candidate for office.” (The “in opposition to” clause was added in 1986.)

The Johnson Amendment is now applied most scrupulously to churches and faith-based organizations, which are barred from translating their community organizing into political activism of any kind. A Southern Baptist congregation opposed to abortion, for example, is prohibited from explicitly supporting a pro-life Republican running for Congress solely because of the church’s nonprofit status.

Through the Johnson Amendment, the Internal Revenue Service exercises the power to stifle a religious organization’s right to free speech. In effect, an evangelical pastor, Orthodox rabbi, Muslim imam, or Catholic priest who wishes to urge support for a religious freedom bill or oppose Obamacare’s contraception mandate can be muzzled under federal law.

The suppressive nature of the Johnson Amendment can be traced to its origins in the 1950s—a period that the Left usually condemns as “conformist” and hostile to free speech—and Lyndon Baines Johnson, a man criticized for his low political morals. Running for re-election in 1954, then-Sen. Johnson faced a difficult challenge from his Democratic primary opponent, Dudley Dougherty, who received backing from two conservative nonprofit groups in Texas. The nonprofits churned out campaign materials calling for the election of Dougherty—much to the chagrin of Johnson. Shortly thereafter, the Texas senator urged Congress to take up a proposed change to the U.S. tax code that would prohibit outside groups—like those supporting his primary opponent—from political organizing. Aimed at punishing Sen. Johnson’s enemies, the Johnson Amendment now applies to a wide range of nonprofit organizations, including churches.

Ironically, or perhaps not, the IRS restrictions apply to religious organizations, but not to other politically active outside groups, such as labor unions, which have long bankrolled the Democratic Party. Some may argue that the key distinction lies in a church’s tax-exempt status, yet labor unions are also subsidized—union member dues are deductible as an employee expense, and unions enjoy many other legal privileges, up to and including exemptions from laws against violence and extortion

As Jay Sekulow, chief counsel of the American Center for Law and Justice, argues that the Johnson Amendment “prevents religious leaders from truly exercising their constitutionally-protected free speech rights when they act in their official capacity as a pastor or head of a religious, tax-exempt organization,” and that it has turned IRS agents into a speech police force.

The repeal of the Johnson Amendment would uphold those free speech rights and protect American churches from an overzealous federal government. In a democracy like ours, free speech should be guaranteed to all with no exceptions.