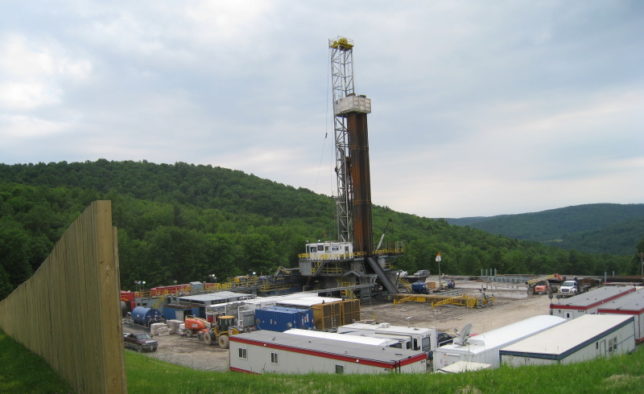 The War on Fracking

The fight to expand RGGI hasn’t been fought in a vacuum. Pennsylvania has been targeted by environmental activist groups for years, since victory in the Keystone State would almost certainly lead to a ban on fracking—dealing an enormous blow to traditional energy sources such as coal, natural gas, and petroleum in the state that begat the American oil industry.

Many of these environmental organizations are headquartered in California and Washington, DC, and all of them operate with huge funding from ultra-wealthy liberal foundations and Democratic mega-donors.

While RGGI doesn’t specifically target fracking—it levies taxes on coal and natural gas power plants—these groups have been angling for a statewide ban on fracking for years.

Fracking, or hydraulic fracturing, is a method of extracting crude oil and natural gas by injecting a solution of sand, water, and chemicals (about 0.5 percent–2 percent of the mixture) into bedrock under intense pressure, fracturing rock formations to increase oil and gas flow. Contrary to popular opinion, fracking isn’t new—it has been widely used since the 1950s—but it experienced a boom, starting in the mid-2000s.

America owes its energy independence to fracking. In 2009, the U.S. was the world’s third-largest oil producer behind Russia and Saudi Arabia. In 2019, it led the globe in oil and natural gas output, more than doubling oil production and increasing gas production by two-thirds in a decade—producing 12.3 million barrels of crude oil per day. And in 2019, America became a net energy exporter for the first time in 67 years, according to the U.S. Energy Information Administration.

Pennsylvania sits firmly atop the Marcellus Shale, an enormous formation that runs from upstate New York to all of West Virginia. Geologists have known about the Marcellus Shale since the 1830s, but not until the mid-2000s—when drillers applied modern fracking techniques pioneered in Texas—did they discover just how blessed with resources Pennsylvania really is.

The Marcellus Shale contains an estimated 84 trillion cubic feet of natural gas, making it perhaps the largest natural gas field in the country. Some experts estimate that it contains up to 500 trillion cubic feet, making it the second-largest natural gas field in the world. Utica Shale, another massive formation, also runs beneath western Pennsylvania. Fracking enabled drillers to reach the gas trapped in shale—thin layers of fine-grained rock—quickly and cheaply.

Fracking helped much of western Pennsylvania escape the worst of the 2009 Great Recession. The Bureau of Labor Statistics reports that between 2007 and 2012, the average annual pay in Pennsylvania’s oil and gas industry grew faster (by $13,624, or 14.6 percent) than pay in the rest of the nation. Between 2008 and 2012, employment in the Keystone State’s oil and gas industry went from the nation’s 10th largest to its sixth largest.

And the industry hasn’t let up—in 2016, Shell began construction on a $5 billion plant outside Pittsburgh that will use ethane produced from the Marcellus and Utica fields to produce polyethylene, a plastic widely used in commercial products and packaging. The plant is expected to create as many as 20,000 local jobs.

One Allegheny County executive, Rich Fitzgerald, put it this way:

No city in America has benefited more from the shale revolution in the last dozen years than Pittsburgh. We were one of the only regions in the country that did not experience the Great Recession back in 2008, because that’s when we discovered the Marcellus Shale.

In the next installment of “The ‘Greening’ of Pennsylvania,” take a closer look major environmental groups pushing the anti-fracking agenda.