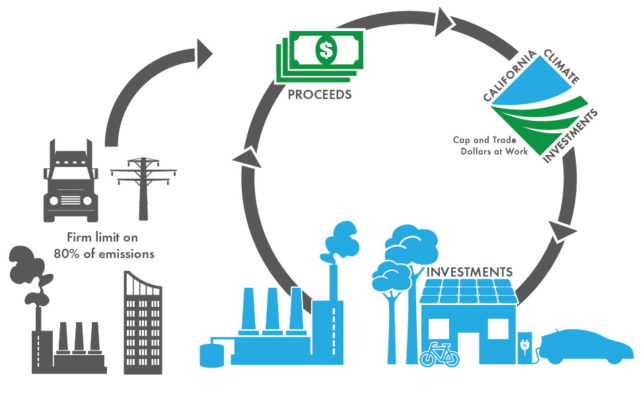 Cap-and-trade is phony “market” economics at its worst. Cap-and-trade programs cap the annual amount of greenhouse gases—mostly carbon dioxide and methane—that companies are permitted to emit. Producers can then trade a limited number of emission permits in an auction, in order to emit more without being fined, but the cap and total number of permits shrink each year, making it more expensive for them to emit greenhouse gases.

In 2019, California’s cap-and-trade system amounted to a $600 million tax on producers in the form of emission auction revenues, which are passed along to consumers. California’s nonpartisan Legislative Analyst’s Office estimates that cap-and-trade will raise gas prices by 15–63 cents per gallon by 2021 in a state where retail electricity prices are already 53 percent higher than the national average.

Cap-and-trade is also deeply unpopular; it was at the heart of congressional Democrats’ climate plan in 2009—the American Clean Energy and Security Act (better known as “Waxman-Markey”)—which proved so unpopular and politically risky that even the new Democratic majority soon dropped the program, declaring it dead.

Numerous states have attempted to create regional cap-and-trade systems like RGGI, only to withdraw after a few years. More than a decade ago, the Western Climate Initiative (WCI) looked set to dominate the U.S. and Canada with a massive cap-and-trade system; yet by 2011, every state except California had withdrawn from the compact, with some Canadian provinces calling the WCI a “cash grab” by their richer neighbors.

And the carbon offset “benefits” aren’t impressive. In 2009, Thomas Crocker—the father of cap-and-trade theory—explained to The Wall Street Journal that he doubts the system can even accomplish what it sets out to do: lower greenhouse gas emissions. He stated: “I’m skeptical that cap-and-trade is the most effective way to go about regulating carbon,” adding that he favors a direct tax on emissions (a “carbon tax”).

Ironically, some of the most vociferous opponents of cap-and-trade are liberal carbon tax groups. The Carbon Tax Center—which supports the radical Green New Deal, despite the bill’s rejection of carbon taxes—criticizes cap-and-trade as opaque and unhelpful, creating volatility in energy pricing and acting as a “hidden tax” on consumers. (It’s worth pointing out that carbon taxes are a terrible idea: Canada’s national carbon tax is expected to cost the typical household up to CA$1,120 in extra energy bills each year by the time it reaches its peak in 2022.)

A Lot of Pain—and No Gain

The DEP estimates that under RGGI, the state’s annual greenhouse gas emissions could fall by 25 percent between 2022 and 2030. Yet the DEP also reports that the state’s emissions naturally fell by nearly 19 percent from 2005 to 2016, without any such framework. That’s largely due to Pennsylvania’s dramatic shift from coal to natural gas production and modest increase in nuclear power production. (Natural gas emits roughly half as much carbon dioxide when burned as coal, and nuclear produces none.)

The DEP estimates that joining RGGI will add 27,000 jobs and $1.9 billion to the state economy, as well as save $6 billion in public health costs, although even sympathetic observers note that the agency didn’t provide details as to how it reached those figures. State Representative Jim Struzzi (R), who authored the bill blocking RGGI membership, called the DEP report a “ridiculous piece of propaganda.”

But the DEP’s own reports show that the annual cost—passed through to taxpayers—could reach $320 million as early as 2022, using proceeds from the annual RGGI emission auction.

The Industrial Energy Consumers of Pennsylvania, a major manufacturers’ trade group, estimates the minimum financial impact of RGGI at $275 million per year as an added cost to energy producers, not counting the expense of purchasing cap-and-trade emission permits—much of which will be passed along to households and other consumers.

Unlike some global warming policies, RGGI has a wealth of data to examine. A 2018 study by the libertarian Cato Institute found that the program “resulted in a 12 percent drop in [overall] goods production,” compared with a 20 percent gain in non-RGGI comparison states. Critically, RGGI states saw power imports increase from 8 percent to 17 percent and “shifted jobs to other states.” In Delaware alone, RGGI emission allowance costs added $11 million to the state’s electricity bills.

One independent analysis of how RGGI invested its revenues in 2018 found that the program resulted in a nearly $900 cost per metric ton of carbon dioxide reduced, vastly higher than the “social cost of carbon”—that is, the measure of the economic impact of emissions used to justify carbon pricing schemes—that the far-left Environmental Defense Fund estimates at roughly $50 per metric ton.

But here’s the kicker: Cato’s study found “no added emissions reductions or associated health benefits from the RGGI program.”

Carbon dioxide emissions fell more rapidly as a percentage in RGGI states, given their mandated shift away from so-called fossil fuels, but non-RGGI states slashed more than twice the volume of metric tons of carbon dioxide emissions than did RGGI states between 2007 and 2015 (57 million vs. 125 million metric tons). As in Pennsylvania, that’s largely attributable to a nationwide shift from burning coal to natural gas, a product of the ongoing fracking revolution.

Some on the Left agree. Food and Water Watch (FWW), an ultraliberal environmentalist group that campaigns against natural gas and supports a ban on fracking, called RGGI a “flawed and ineffective program that does not meaningfully reduce greenhouse gas emissions.” Of course, FWW doesn’t believe that RGGI goes far enough and demands a statewide fracking ban.

In the next installment of “The ‘Greening’ of Pennsylvania,” follow the environmental-left’s war on fracking.