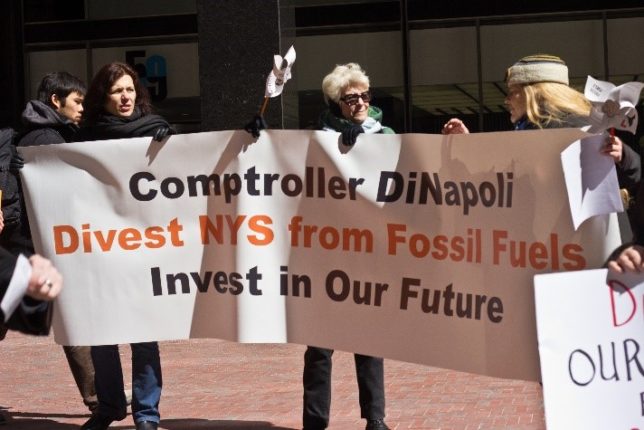 The incumbent New York state Comptroller, Thomas DiNapoli, has for about two years now been on the receiving end of a noisy public lobbying campaign by 350.org and its co-thinkers, such as Fossil Free New York. The goal: to push DiNapoli to use his influence over the Common Retirement Fund to divest its holdings from fossil fuels. Credit: maisa nyc. License: https://bit.ly/2Zu3jHi.
by Neil Maghami

Summary: American environmentalists have long promoted political cooperation with labor organizations. There’s at least one issue, however, where cooperation between the two sides proves problematic—and that concerns green demands for public sector pension plans to divest from fossil fuels. Those environmentalist campaigns leave some union members with an uneasy feeling about the future of their pensions—while also making taxpayers nervous.

On the West Coast, a similar story is unfolding, where union members are becoming more vocal in expressing their concerns about Big Green’s fossil fuel divestment push. The California Public Employees Retirement System (CalPERS) has experienced a multi-year pressure campaign by pro-fossil fuel divestment environmentalists. With more than $370 billion in assets as of June 30, 2019, the fund is a prime target for the greens. It is the largest defined benefit pension organization in the U.S. and a trend-setter for the rest of the sector. CalPERS has nearly 2 million members, and also administers health benefits for many members’ families.

No doubt that, in the greens’ thinking, divestment by CalPERS (like New York’s Common Retirement Fund) would have something of a domino effect on other public retirement systems. A group of CalPERS retirees in 2016 created a 501(c)3 organization, Fossil Free California, to call for divestment, working at times closely with the wider 350.org apparatus.

Last year, Jason Perez, a sergeant with the Corona, California, Police Department ran for a board seat on the CalPERS Board of Administration. A vocal skeptic regarding divestment, he faced off against incumbent Priya Mathur, a 16-year veteran of the board who had positioned herself as a champion of embedding “ESG” (environmental, social, and governance) factors in the system’s investment approach.

Perez had previously served as a detective, patrol officer, and motorcycle officer. He had been motivated enough by his concerns over the political pressure being brought to bear against CalPERS to divest from various investments to show up periodically at public meetings of the organization’s board and speak out.

In 2017, for example, Perez appeared before the CalPERS board to deliver a plea to focus on strengthening investment returns, versus pursuing further divestments. “Politics and pensions just don’t mix,” he said.

Officially, Fossil Free California took no direct position on Perez’s candidacy, citing its 501(c)(3) designation as requiring it to avoid endorsing anyone. That said, we know from a September 24, 2018, email made public by the City of Palo Alto that Vanessa Warheit, a climate campaigner who has been active with the League of Conservation Voters and 350.org, personally urged eligible CalPERS members to vote for Mathur while citing Fossil Free California’s positive comments about Mathur’s devotion to ESG.

(Perez has also been open about his beliefs in what he has called the “sanctity of life”—and was smeared for that in pro-Mathur campaign materials.)

Perez’s campaign message was simple: “Foolish and irresponsible” investment decisions have hurt CalPERS investment returns over time, such that the system is about 71 percent funded. Worse, instead of focusing on fixing this, his opponent had been “traveling around the world [and] “living the lifestyle of the rich and famous” while delivering speeches about socially responsible investing. To protect the interests of its members, CalPERS needs to return to prioritizing prudent “investment decisions and investment returns.”

Having defeated Mathur and now on the CalPERS board, Perez has made it a priority to push for CalPERS management to conduct a thorough examination of divestment in general, including the cumulative costs to the system associated with potential divestments.

In March 2019, a chorus of pro-divestment advocates rose to speak at a public meeting of the CalPERS board, including several Fossil Free California representatives. Also speaking was Dane Hutchings, a representative of the League of California Cities. The cities that make up the League pay into CalPERS as employers of local government workers, and are therefore very interested in ensuring the system is well-run. If CalPERS payments need to be increased on the employer side, this translates into either higher local taxes or reduced services.

In his brief remarks, Hutchings reiterated, as he has done several times at past CalPERS board meetings, what he sees as the real stakes in the divestment debate. His clear statement and stark warning deserves to be reprinted here:

I think I’d start off just by saying that from the League’s perspective it is your charge to continue to be laser focused on returns. It is not your charge to modify State and federal policy that regulates these industries [targeted for divestment].

I think those are all better suited for what we should be doing or not doing with fossil fuels. CalPERS should be focused on maximizing their returns for the folks who are relying on their retirement…

[It] is beyond the scope of this Board, to decide how to change the world. I swear if we could invest in rainbows and unicorns, and we can make money, I would be all in. But right now, we are at a critical juncture. We talk about the next 15 years of our planet. I’m talking about the next 10 to five years where cities are going to be going bankrupt [due to various financial pressures], and they absolutely need your assistance to be able to provide employees, retirees, and those folks with their retirement security and their health care benefits.

In June, a collection of labor and environmental organizations known as the “BlueGreen Alliance” release its “Solidarity for Climate Action” policy plan. Not to be outdone by the backers of the “Green New Deal,” or the activists behind it, the Sunrise Movement, BlueGreen’s plan calls for the creation of “a new economy” by devising “a new plan to create jobs and protect the environment… [and that responds] to the climate crisis on the scale that science demands, while simultaneously addressing inequality in all its forms.”

Follow our vision, BlueGreen says, and we can build a better, cleaner, richer and more fair America. The group brings together an army of national political power players—from the United Steelworkers, Service Employees International Union, American Federation of Teachers, and other large unions to green outfits such as the Sierra Club, Natural Resources Defense Council, Union of Concerned Scientists and the League of Conservation Voters.

Blue Green’s steady stream of public statements and reports over the last ten plus years speak to a high level of political compatibility between the environmentalist movement and the House of Labor.

There are limits, however, to that compatibility, as the examples of the divestment campaigns in Vermont, New York, and California suggest. There are some residents of the House of Labor that, whatever aspects of the environmentalist movement they may personally agree with, wisely do not want Big Green to influence the management of their retirement funds.

What the environmentalists will do next, in response to this opposition, remains to be seen.

The movement has the financial resources, for example, to focus its efforts more into litigation against the public sector retirement systems to force them to change their investment approach—perhaps citing a combination of climate change research, the interests of “future generations,” and some (invented) “right” of individuals to “challenge” investment decisions taken by institutions.

Student activists twice attempted this with Harvard College’s endowment, in 2014 and 2015, for example, and were defeated both times—failures that still gained invaluable publicity for their cause.

A more extreme next step was outlined by John Feffer of the far-left Institute of Policy Studies, in a July 30, 2019, blog published by TomDispatch.com.

Rather than piecemeal campaigns by 350.org and its allies targeting individual pensions, why not think far bigger, at the global level, about ways to mandate everyone and all institutions to embrace the broader green agenda, including divestment?

Feffer’s piece argued that if “ordinary parliamentary and congressional procedure” cannot rapidly bring about the “radical change” needed to protect the environment, then activists will turn to “a far more basic form of democracy: people in the streets engaged in actions like school strikes and coal mine blockades. This is the kind of pressure that progressive legislators could then use to push through a mutually agreed-upon Green New Deal capable of building a powerful administrative force that might convince or coerce everyone into preserving the global commons” (emphasis added).

If this is the road to the green utopia, then many people—not just those pay into the public sector pensions—are going to want to stop the car and make an immediate U-turn.