Following the 2000 election—about which, recall, there had been more than a little controversy—the private, “blue-ribbon” National Commission on Federal Election Reform was convened to study and make recommendations about how to better administer the election process in America. Honorarily co-chaired by former U.S. Presidents Gerald Ford and Jimmy Carter, the commission’s membership was bi-partisan.

It oversaw the preparation of and considered background research papers, held public hearings, and made specific, substantive policy recommendations in 13 categories. They are detailed in its final report, To Ensure Pride and Confidence in the Electoral Process, issued in August 2001. They are worth a quick overview, if you’ve got a minute.

Organized by the University of Virginia’s Miller Center of Public Affairs and The Century Foundation, the post-2000 commission was funded by some of the pillars of establishment philanthropy in the country—the David and Lucile Packard, William and Flora Hewlett, and John S. and James L. Knight Foundations.

Then, following the 2004 election, another private, “blue-ribbon” Commission on Federal Election Reform studied and made serious, thoughtful recommendations—worth a brief perusal themselves, too—in eight broad areas about how to improve election administration in America. Co-chaired by Carter and former U.S. Secretary of State James A. Baker III, it was as bi-partisan as its previous iteration.

Organized by American University’s Center for Democracy and Election Management, the post-’04 effort’s research was conducted by The Pew Charitable Trust. Its final report, Building Confidence in U.S. Elections, was released in September 2005. 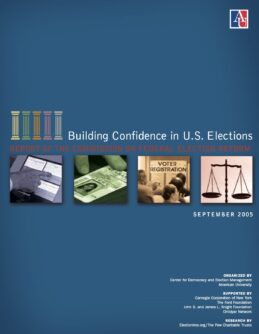 And it was also funded by the country’s Big Philanthropy—the Carnegie Corporation of New York, the Ford and Knight Foundations, and the Omidyar Network.

If even only as a hypothetical question, could places like Carnegie, Ford, Hewlett, Knight, Omidyar, and Packard even consider doing something equivalent or similar in the wake of the last election? Would they? Could and would others? In either case, if not, why not?

Has establishment philanthropy itself changed, or are “blue ribbons” faded, or both?

Elite philanthropy probably has changed, yes. It’s more liberal and progressive, and politicized. It means, and is properly perceived, to be all of that. Popular trust in it is thus lower. And trust in those who would serve on “blue-ribbon” commissions of any and all sorts has probably faded, as well, perhaps particularly politically tinged ones. So, okay, philanthropy and “blue-ribbon-ness” have both changed.

Since this is The Giving Review, though, let’s wonder more about just the grantmakers. As Giving Review co-editor Bill Schambra noted here last year, one of many potential explanations for low trust in nonprofits overall, including big foundations in particular, may be that they are “increasingly dedicated to a political agenda dramatically at odds with the beliefs of at least half the American people, so of course public trust is low, just as it is in other major institutions similarly out of step with public attitudes.”

The fate of philanthropic funding for what would now be “cyan-ribbon” commissions may thus be in doubt, and so the future of such exercises may be in question. Not only does Big Philanthropy not really want to gather and analyze evidence and then present it along with any policy recommendations in this once-respected way, one can plausibly conclude, it just plain can’t do so successfully anyway.

Its money—of which there’s much more than before—might now mean a lot less, or at least something very different, than it used to. Perhaps in this context or others, we’ll see; time will tell.

This article first appeared in the Giving Review on January 11, 2021.