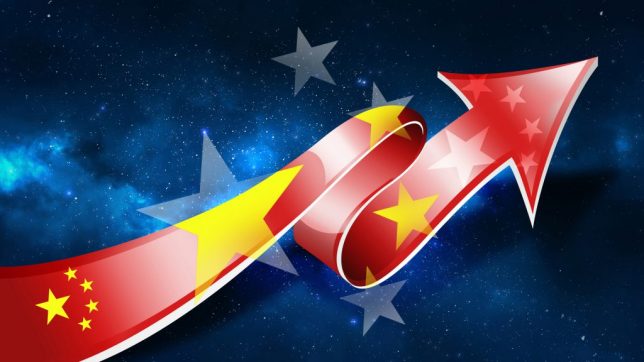 Communist China is one of the gravest threats this country has ever faced, in large part because many members of the American establishment see China as a partner, a role model, and the wave of the future. They believe that, instead of fighting the Communists, we should work with them and emulate them.

Democracy is a problem, and China has the solution.

In the real world, China is a totalitarian police state that tortures and jails dissidents and seeks to intimidate anyone who gets in its way. Arguably the worst violator of human rights in history, it’s killed more of its own people than any other government, ever.

Enriched by the work of slaves and near-slaves and by the theft of intellectual property, China’s kleptocracy is using its unimaginable wealth to buy off politicians in Africa, fund hundreds of propagandizing “institutes” at U.S. colleges, and corner the market on the minerals necessary for modern technology.

The long list of China’s hacking operations includes the theft of 21.5 million U.S. government personnel records. And, as admitted by Mark Penn, Clinton chief strategist in 1996 and 2008: “In 1996, the Chinese government had the ‘China plan’ and pumped hundreds of thousands of dollars into Bill Clinton’s re-election campaign.”

Yet most members of the elite in the nation’s capital, in the major media, and in big business see no problem in working with the Communists.

With China as the world’s top movie market and an indispensable partner on projects ranging from movies to theme parks to casinos, Hollywood is in Beijing’s pocket, as are news organizations that are divisions of China-partnered corporations. Squire Patton Boggs, one of the top-30 law firms in the world and a key power-broker in Washington, represents China. The Washington Post distributes, as a newspaper supplement, the Communists’ propaganda publication China World.

Why not? China’s cool. Thomas Friedman of the New York Times wrote in 2005: “I cannot help but feel a tinge of jealousy at China’s ability to be serious about its problems and actually do things that are tough and require taking things away from people.” In 2009, Friedman wrote, “One-party autocracy certainly has its drawbacks. But when it is led by a reasonably enlightened group of people, as China is today, it can also have great advantages. That one party can just impose the politically difficult but critically important policies needed to move a society forward in the 21st century.”

Professor Daniel A. Bell of Tsinghua University in Beijing, formerly of Stanford and Princeton, wrote in a 2012 Christian Science Monitor commentary about “the success of meritocracy in China” as opposed to “western-style democracies” where “less talent goes to the bureaucracy.” The summary of his article reads: “Democracy has its problems. The world—especially the U.S.—could learn from China’s ‘political meritocracy.’ Its one party selects leaders based on ability and judgment. They balance the interests of an entire country—and the world, not just finicky voters or big donors.”

Another sinophile is Andy Stern, former head of the Service Employees International Union and the labor leader closest to President Obama. “As painful and humbling as it may be,” Stern wrote in a slavish 2011 op-ed, “America needs to . . .  study the ingredients of its competitors’ success. While we debate, Team China rolls on.” Stern quoted Robert Engle, Nobel Prize-winning economist, as saying “that while China is making five-year plans for the next generation, Americans are planning only for the next election.”

General Electric CEO Jeffrey Immelt (former head of NBC and MSNBC and chair of the Obama Administration’s Jobs Council) said in 2012: “The one thing that actually works, you know, state-run communism may not be your cup of tea—but their government works.”

In 2014, The Economist summarized the Chinese argument, that “their model–tight control by the Communist Party, coupled with a relentless effort to recruit talented people into its upper ranks—is more efficient than democracy and less susceptible to gridlock. . . . [T]he regime’s obsession with control paradoxically means it pays close attention to public opinion. At the same time China’s leaders have been able to tackle some of the big problems of state-building that can take decades to deal with in a democracy.”

It’s interesting, isn’t it, that the arguments against democracy by many of our opinion leaders and industrialists sound as if they were crafted by Chinese Communists? Great fools think alike, I suppose.