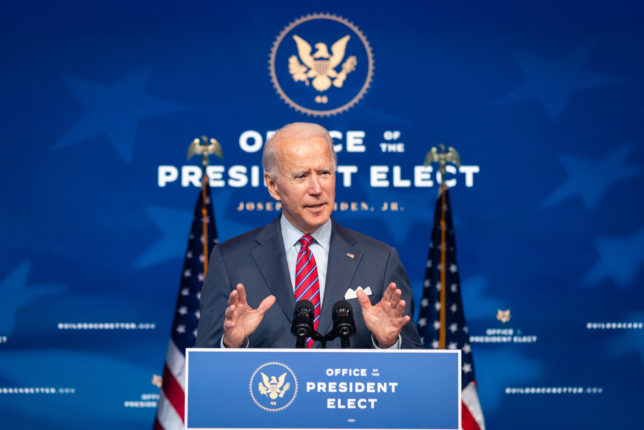 President-elect Joseph Biden. Credit: @Transition46. Note: The “Office of the President Elect” is not an official government office or logo, although previous presidents-elect have used similar branding.
by Robert Stilson

Following the 2020 election, President-elect Joe Biden has been releasing the names of those he intends to nominate to senior executive branch posts, as well as those who are serving on his transition team. InfluenceWatch now hosts a detailed profile on the Biden-Harris Transition.

To understand the nascent Biden administration, then, it makes sense to try to understand his transition team and the influences that its hundreds of members bring with them. Accordingly, InfluenceWatch now features a work-in-progress profile listing the members of the various agency review teams and their professional backgrounds and affiliations to the extent those might be relevant to the particular part of the federal government that they are tasked with reviewing.

Given some of the issue areas the Capital Research Center (CRC) studies most frequently, the profile focuses initially on the Departments of Justice, Labor, and Education, as well as the Environmental Protection Agency (EPA). A few notable patterns among the members of these agency review teams are evident.

The first is prior governmental service. Of the 105 members of those four teams listed as of January 8, almost 70 percent have previously worked in the federal executive branch—largely during the Obama Administration and sometimes in important roles.

Another feature, which other observers have noted, is how strongly higher education is represented. Of those 105 members, nearly 40 percent are either currently or formerly affiliated with an American college or university as faculty, staff, a board member, or a fellow. While this could be read in any number of ways, it certainly bolsters the arguments that left-of-center politics are the dominant ideology on America’s college campuses.

Organized labor’s influence over the administration is also evident in the transition. At least 20 of the members of the four teams are current or former union staff, including 40 percent of the Labor team. And others are currently or formerly affiliated with union-aligned nonprofits. The “union-Democratic alliance” detailed by CRC’s Michael Watson appears as strong as ever.

Finally, the legal profession is featured prominently. In addition to the large number of current or former labor union or government attorneys and law professors on the Justice, Labor, Education, and EPA teams, more than two dozen members have backgrounds in private practice, often at some of the more prestigious law firms in the country.

Universities and labor unions aren’t the only nonprofit entities well represented on Biden’s agency review teams. CRC’s Michael Hartmann has already noted the employees of “left-of-center philanthropic foundations or grantmaking entities” on the transition teams. A number of Justice, Labor, Education, and EPA members are currently or formerly affiliated with left-progressive activist nonprofits that CRC has studied and profiled.

One member of the Justice team, Roy Austin, is an advisor to the Justice Innovation Lab, a fiscally sponsored project of the New Venture Fund—itself part of the Arabella network covered extensively by CRC’s Hayden Ludwig—and an advisory board member at the Tides Center project Fair and Just Prosecution. Another member, Pamela Karlan, serves on the board of directors of the American Constitution Society, participated in Democracy Alliance’s Spring 2016 conference, and is one of the 43 individuals listed by Demand Justice (another Arabella network project) on its Supreme Court Shortlist. Jose Morales is deputy director of Fair Fight Action, a 501(c)(4) advocacy group founded by Georgia Democratic politician Stacey Abrams.

The Department of Labor team has at least two current staff, two former staff, and one board member from the National Employment Law Project—a union-aligned 501(c)(3) think tank. One of them, Jenny Yang, was a 2018 Open Society Foundations fellow and is also listed on Demand Justice’s Supreme Court Shortlist. Josh Orton, a senior advisor to Sen. Bernie Sanders (I-VT) and former consultant to NARAL Pro-Choice America, is also on the Labor team, as is the co-executive director of the National Day Laborer Organizing Network.

In addition to the notable teachers union presence on the Department of Education team, its members also include current or former staff at UnidosUS, the Mexican American Legal Defense and Educational Fund, the Rockefeller Foundation, and the Century Foundation. Three members are currently or formerly affiliated with the Center for American Progress and two with New America, a center-left think tank.

The team lead for the EPA team, Patrice Simms, is a vice president at Earthjustice, and another of its former vice presidents is also on the team. Earthjustice is a public interest law firm that sued the Trump Administration more than 130 times over its environmental policy. Other EPA team members include employees or former employees at the Sierra Club, the Environmental Defense Fund, and the Climate Action Campaign.

Biden continues to announce new intended nominees for his Cabinet and other important positions, as well as add new members to his transition’s agency review teams. As Inauguration Day draws closer, CRC will continue to add to its Biden-Harris Transition InfluenceWatch profile, which will hopefully serve as a public educational resource on the professional backgrounds and affiliations of those who will likely play important roles in shaping the next four years of U.S. government.