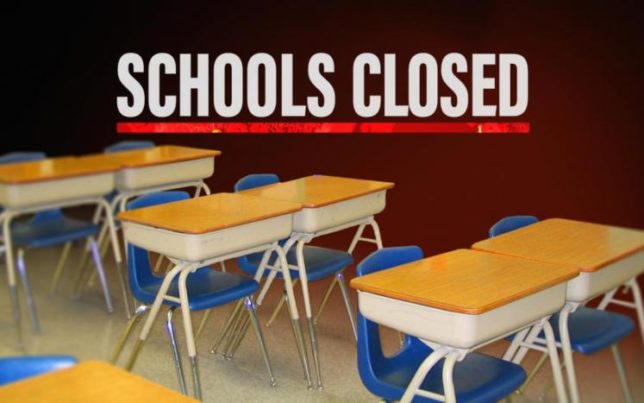 Longtime readers will remember that last summer we warned that teachers unions were strategizing to continue school lockdowns indefinitely. Some were explicitly refusing to return to work—oh, excuse me, to classrooms—until such COVID-19-related precautions as defunding the police, a major tax increase, and a government-controlled socialized medical system were adopted.

Those lockdowns continue outside of states like Florida, Iowa, Wyoming, and Montana that have shown strong leadership and insisted on offering parents the option to send their children to real school—in person, with real teachers (not Zoom “monitors”), five days a week (not one day, Madam Press Secretary).

As we approach the one-year anniversary of “two weeks to slow the spread,” where does the teachers unions’ labor action stand? Where it stands depends on where you sit—and research shows that if you sit in a state with powerful teachers unions, your kids are more likely to be locked down. (Excuse me again, learning virtually.) Regardless of which party controls the state’s governorship, states with powerful teachers unions are in a death struggle just to get some students back to school some of the time.

Not every state’s students have been equally harmed by union obstinacy. Florida, Iowa, Wyoming, and Montana have offered all or nearly all their students five-days-per-week in-person schooling. But others have placed the demands of organized labor special interest groups over the needs of students, despite increasingly stronger evidence that schools are not drivers of COVID spread and that open schools do not even put teachers at above-normal risk. Suffering the most are students in Maryland, California, Oregon, and Washington.

Locked Down in the “Free State”

Coming in dead-freaking-last in getting schools reopened, according to data compiled by commercial data vendor Burbio, is Maryland, with a School Opening Tracker score of 9.8 out of 100 as of February 24. (Zero equals every public school in full lockdown-closure, and 100 means normal five-days-per-week service is offered to every student.) Back in the fall, my colleague Jon Rodeback detailed how the school board in his (Republican-leaning) Maryland county, controlled by a teachers union–endorsed majority, voted to remain in lockdown for the fall semester.

Unlike the other three most-locked-down states, Maryland does not have a teachers union–endorsed governor. Despite this, Gov. Lawrence J. Hogan Jr. (R), who is not his father’s son when it comes to showing political courage, has consistently appeased the unions, asserting that he lacks the authority to do anything to compel districts to reopen, instituting school mask mandates by executive order (as demanded by the union) in exchange for nothing, and hinting that he would not use coercive means against teachers who continue to refuse to work. His “beating the drum” for reopening is limited to a goal of part-time instruction for some students by March 1, not much more ambitious than that of Biden administration Press Secretary Jen Psaki.

All this appeasement has convinced the teachers unions not to give an inch. This week, teachers unionists conducted a drive-by rally in Montgomery County, a suburb of Washington, DC, to protest the county’s proposal for limited school reopening. One featured speaker told rally-goers: “You will not sacrifice our lives, disrupt our communities, and endanger our students, for what? Test scores? Or a few folks to get their free babysitters back?” The Montgomery County school board meanwhile focused on what matters, voting to buy electric school buses to serve the schools they refuse to open by the real-world definition, not the definition pandering to teachers unions.

Golden Trouble in the Golden State

California comes second-from-bottom with a Burbio score of 11.1 out of 100. Its school boards have focused more on advancing Critical Race Theory by canceling Abraham Lincoln and insulting parents who “want their babysitters back” than on reopening schools, though the San Francisco board later tabled canceling Lincoln and the wannabe insult comics of the Oakley Union board resigned en masse after their routine was exposed.

But even in the archetypal blue state, resistance to the union lockdowns is growing: Republicans are petitioning for a recall election against Gov. Gavin Newsom (D), and the California Teachers Association (the state’s largest and politically hegemonic teachers union) is sufficiently spooked at the possibility of reopening that it has launched television advertisements playing up the nearly nonexistent “risks” of even the anemic reopenings proposed by Newsom and other California Democrats.

Oregon Gov. Kate Brown (D) had hoped to resume in-person classes in mid-February and conceded to a number of demands from the teachers union to do so. The state prioritized teachers and school personnel for vaccination, ahead of the elderly people most at risk of severe complications from COVID-19. Parents in notoriously left-wing Portland held a rally supporting school reopenings. Teachers union supporters naturally decried this as racist, despite widespread evidence that school lockdowns particularly harm to poorer and ethnic minority students.

Teachers unions’ response? Demand impossible-to-meet reopening standards, the most notable being a minimum six-feet separation between students. Unions also pressed the Centers for Disease Control and Prevention (CDC) into adopting that recommendation, despite now-CDC Director Rochelle Walensky previously having told her local school district “it is quite safe and much more practical to be at 3 feet” when she was a Harvard researcher and private citizen not serving at the pleasure of a teachers union–controlled government. Not coincidentally, the unions’ all-but-captive school boards have kept the vast majority of Oregon schools closed. (Excuse me, open for virtual learning.) As of a February 17, the New York Times report, “80 percent of Oregon’s 560,000 public schoolchildren remain in fully remote instruction,” with a Burbio openness score of 12.8 out of 100.

Oregon’s neighbor to the north isn’t much better, with Washington state scoring a 19.2 out of 100. Seattle had hoped to welcome back pre-kindergarten through first-grade students by March 1, but a bargaining impasse with the teachers union means that date will not be met.

A consistent thread in the four most-locked-down states is a lack of leadership seeking to reopen. While Oregon, Washington, and California are led by teachers union-endorsed governors, states like Colorado, Kansas, and Rhode Island also have teachers union-endorsed governors and are much further along in reopening. Pandering to a special interest group, even one of the most powerful special interest groups in the country, cannot excuse leaving children to rot in front of screens at home.

As for dead-stinking last Maryland and its not-even-union-endorsed Governor Hogan, the world wonders.