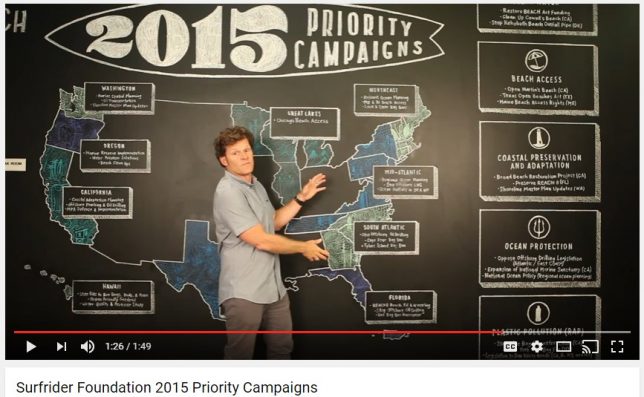 Editor’s Note: CRC has asked the IRS to investigate the Surfrider Foundation and its campaign expenditures. You can see the letter here.

This article originally appeared in the Orange County Register.

The Surfrider Foundation, headquartered in San Clemente, was founded more than three decades ago to protect the beach-going experience in California. Today, the nonprofit environmental organization claims to be “dedicated to the protection and enjoyment of the world’s oceans and beaches through a powerful activist network” that flexes its grassroots muscles on issues related to climate change.

But, when it comes to disclosure, something is amiss. According to the group’s Form 990, Surfrider generates $6.7 million in annual revenue, supposedly to combat climate change, but claims to spend minimal sums on political advocacy and lobbying. From 2010 to 2014, the group’s total lobbying limit, given its 501(c)(3) status, was roughly $2.3 million, yet Surfrider reported less than $70,000 in lobbying expenditures — three percent of the total limit. During that period, Surfrider’s total grassroots lobbying limit was about $600,000, yet the group only spent a reported $24,909 on grassroots lobbying — four percent of its limit.

On various occasions, Surfrider has sent advocates to Washington, D.C., to meet with members of Congress. In 2014, Surfrider deployed at least six representatives to Washington to lobby in support of funding for the BEACH Act — for the stated purpose of granting money to states to support microbiological testing and monitoring of beaches — and to affect legislation on other environmental issues. As recently as last year, dozens of Surfrider representatives visited Capitol Hill for Surfrider’s Coastal Recreation Lobby Day. Participants visited more than 50 Senate and House offices to encourage certain government actions on the climate change issue.

The problem: Surfrider reported a mere $10,125 in total lobbying and $0 in grassroots lobbying that year. Pursuant to Internal Revenue Service rules, Surfrider and other nonprofits must report allocable overhead and administrative costs — including staff salaries and benefits — attributable to lobbying activities. It is difficult to believe that BEACH Act lobbying — not to mention other activities that year — only cost several thousand dollars, given the substantial costs of lodging, meal and transportation costs in the District of Columbia. And don’t forget the front-end preparation costs, from setting up meetings to preparing and distributing written materials.

That same year, Surfrider enlisted the help of the lobbying firm Platinum Advisors to push Senate Bill 968 through the California State Legislature, which restored public access to Martin’s Beach in San Mateo County after billionaire Vinod Khsola — the owner of the property — lobbied to keep the beach private. Khosla hired a top-tier lobbyist, which led Surfrider to pursue extensive lobbying in Sacramento.

Furthermore, public records show that Surfrider contributed $49,500 to the California Conservation Campaign in support of California’s 2014 Propositions 1 and 2, both of which passed. (Proposition 1 authorized roughly $7 billion in general obligation bonds, supposedly for public water system improvements, while Proposition 2 made environmentalist-supported changes to the state’s “rainy day fund.”) Surfrider’s $49,500 expenditure was clearly connected to lobbying, yet its reported total for 2014 remained $10,125.

Something doesn’t add up. The group touts “more than 400 victories protecting our coasts,” but these victories don’t come cheap; they require hand-to-hand combat in Congress and statehouses nationwide.

Surfrider clearly has an appetite for politics and lobbying. The group recently condemned the Trump administration’s rollback of the Environmental Protection Agency’s burdensome regulations, falsely claiming that the repeal of the Clean Water Rule would put drinking water for 117 million Americans at risk. Surfrider has also taken to attacking President Trump’s cabinet and “Big Oil.” There’s nothing wrong with criticizing government officials or corporations, of course, provided that you’re not dishonest in the process.

When it comes to an activist group like the Surfrider Foundation, what counts is what lies beneath the surface.