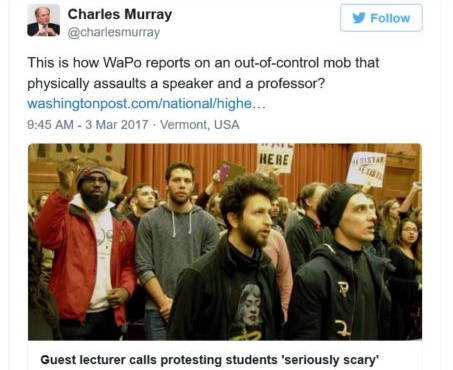 via VDARE.com, http://bit.ly/2r3YP4T
by Daniel Lauer

GuideStar, a popular reference website for information on nonprofits, has announced it will label 46 organizations “hate groups” based on SPLC recommendations. And what do these groups have in common? Very little.

Among these so-called “hate groups” is the Family Research Council, an established charity that advocates for family values and pro-life legislation. Even the Washington Post‘s most snarky columnist, Dana Milbank, was outraged by this libel of “a mainstream conservative think tank,” as he put it in a column entitled, “Hateful Speech on Hate Groups.” Another supposed “hate group” is FAIR, the Federation for American Immigration Reform, a nonpartisan group with over 1.3 million members.

SPLC’s blatantly partisan “findings” reduce these groups and others to the level of actual hate groups like the Ku Klux Klan. In this way SPLC continues its long campaign of social justice activism, smearing reputable nonprofits on the Right by painting with the broadest brush possible.

Worse, SPLC’s list has more than once led to the very “hate crimes” they protest against. In 2013, a shooter entered the Family Research Council’s headquarters to “kill as many as possible” because SPLC had identified the organization as a “hate group” solely due to the group’s support for traditional marriage.

Similarly, in March of this year, Charles Murray—a scholar at the American Enterprise Institute who supports same-sex marriage and was part of the “never Trump” movement—was assaulted by protesters during a speech he gave at Middlebury College. What drove the protesters? The SPLC’s page claiming Murray is a “white nationalist.” (For this distinguished scholar’s withering dissection of that page’s lies, go here.) The thuggish protesters did even worse to a non-conservative professor who was in the room to debate him: Allison Stranger ended up with a concussion.

Our last full-length report called the SPLC a “wellspring of manufactured hate” that advances a radical, partisan agenda. In the final irony, that report also reported something that should have caused a charity watchdog like Guidestar to stay miles away from SPLC: the group is notorious for its exploitation of donors and neglect of its supposed beneficiaries. And that is no secret—you can discover this truth from multiple left-of-center media outlets who have no ideological objection to the group. The Nation, for instance, has harshly criticized SPLC, as has Harper’s, which published a letter from Stephen Bright, president of the Southern Center for Human Rights, to the University of Alabama, declining an invitation to a banquet for a “Justice Award” named for SPLC founder Morris Dees.

Bright called Dees “a con man and fraud” and added:

The positive contributions Dees has made to justice—most undertaken based upon calculations as to their publicity and fundraising potential—are far overshadowed by what Harper’s described as his “flagrantly misleading” solicitations for money. He has raised millions upon millions of dollars with various schemes, never mentioning that he does not need the money because he has $175 million and two “poverty palace” buildings in Montgomery. He has taken advantage of naive, well-meaning people—some of moderate or low incomes—who believe his pitches and give to his $175-million operation. He has spent most of what they have sent him to raise still more millions, pay high salaries, and promote himself.