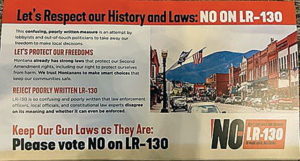 In 2019, the Republican legislature in Montana proposed legislation to pre-empt local governments from placing stricter regulations on firearms carry than the state had enacted. Then-Governor Steve Bullock (D) vetoed it. The legislature then passed textually identical legislation as a legislatively referred state statute, which the governor cannot veto if passed by state voters. Opponents of the legislation outspent the gun-rights group 31 to 1. The Montana Federation of Public Employees (MFPE), the largest labor union in the state, was by far the largest contributor.