In the public policy world, where part of CRC’s mandate is calling out the hypocrisies and fabrications of the other side—hopefully to effect change toward the better—there may be no better measure of success than when the other side is forced to start redefining terms to make their lies sound like truth.

Last week, Capital Research Center achieved that measure of success. Not since President Bill Clinton wrestled with what the meaning of “is” is has America witnessed such tortured verbal parsing.

It began with a well-received June blog post from CRC President Scott Walter telling the tale of Susan Rosenberg, a convicted terrorist who spent 16 years in a federal prison:

Rosenberg . . . started out as a member of the 1960s revolutionary group Weather Underground, graduated into even more violent, and arguably successful, forms of terrorism in the 1970s and 1980s—including bombings at an FBI field office in Staten Island, the Navy Yard Officers’ Club in Washington, DC, and even the U.S. Capitol building, where she damaged a representation of the greatest of the Democrat defenders of slavery, John C. Calhoun.

At some point after President Bill Clinton commuted her sentence in 2001, Rosenberg landed on the board of Thousand Currents, the 501(c)(3) nonprofit that fiscally sponsors the Black Lives Matter (BLM) Global Network Foundation.

Cut to July 14, when suspected less-than-unbiased fact-checking site Snopes decided it needed to set the record straight about Rosenberg and BLM. Snopes likely weighed in because CRC researchers had done several high-profile media appearances—including appearing on the Mark Levin Show—discussing the piece, and formidable cable news pundits such as Tucker Carlson covered the Rosenberg saga as well.

Poor Snopes. In trying to debunk the Rosenberg connection to Thousand Currents, they found that it was, in fact, all true. So, they consulted their Orwellian playbook and simply questioned the definition of the word “terrorism.”

Then they could rate the claim as only half true. Which is exactly what they did in an odd post (see below) that seems to move backward in time. 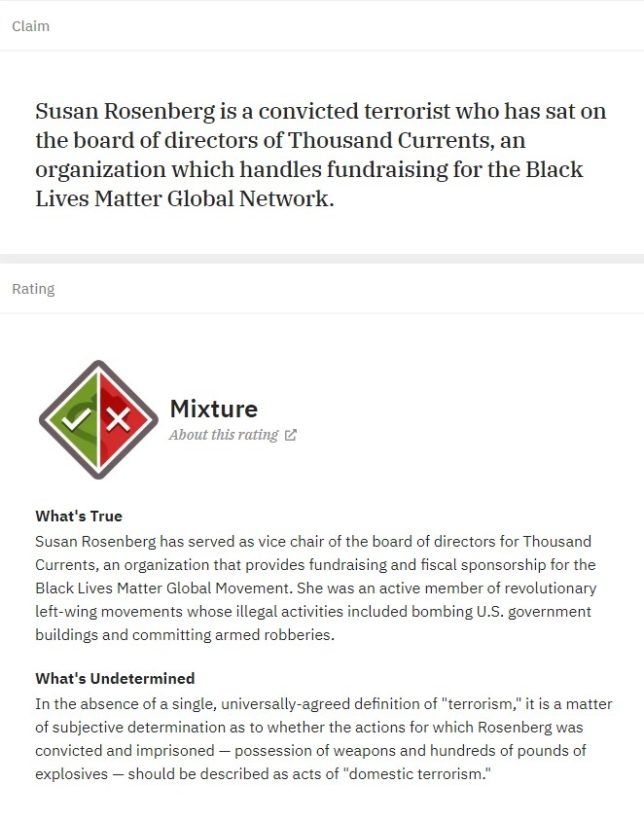 We think it’s absolutely adorable, too . . . but also quite flawed. People who believe they’re contributing to the noble cause of supporting black lives have the right to know with whom the parent group aligns.

Given Snopes’s verbal gymnastics, we rate Snopes as less than 100 percent interested in the facts.