ACORN has renamed its best-funded affiliate, ACORN Housing Corp., instead of shutting it down and re-opening it as a new nonprofit — as it has done to several state chapters so far as part of its rebranding effort.

The new name of the heavily taxpayer-subsidized ACORN Housing is Affordable Housing Centers of America Inc.

The name change doesn’t show up in many publicly available databases yet, but ACORN Housing filed name change documentation with the Florida secretary of state’s office indicating the name change was official as of Jan. 12 this year. 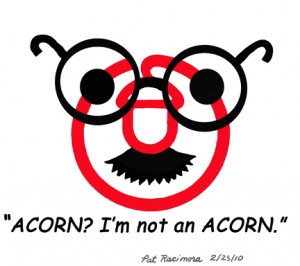 Other documentation shows the name change was planned by ACORN officials weeks before. A domain name registry search indicates that Affordable Housing Centers of America Inc.’s domain name (ahcoa.org) was registered on Dec. 8, 2009.

The rebranding effort is a sham, according to ACORN official Nathan Henderson-James.

(graphic above is from No Quarter)