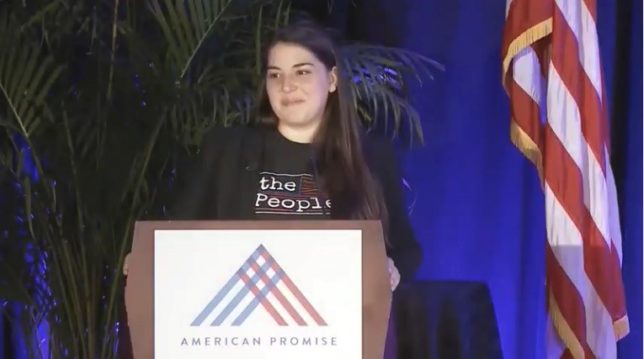 Katie Fahey, founder of Voters Not Politicians.
by Ken Braun

Near the end of Slay the Dragon, while giving a victory speech after passage of Proposal 2, Katie Fahey reads aloud the opening sentence of Article I of the Michigan Constitution: “All political power is inherent in the people.”

That word “all” is particularly meaningful. Michigan’s constitution errs strongly on the side of empowering the people—the voters. Unlike many states (and as demonstrated by the passage of Proposal 2), Michigan voters have the unilateral authority to amend their constitution and even to pass or reject laws without the support of lawmakers or the governor. Changes to the document have generally enhanced this power: A 1978 amendment requires voter approval for any increase in the taxing power of a local government. And every policymaking official in state government derives all his or her authority from a vote of the people, either directly (elected officials) or indirectly (policymakers appointed by elected officials).

The political redistricting process was not an exception. After prior decennial U.S. Census years, state representatives and senators passed mapping plans designed to adhere to legal restrictions originally mandated by the Michigan Supreme Court (also an elected body) and later codified into law. Those maps had to be approved by the governor and were still often subjected to state court challenges before being ratified. Directly elected representatives of the people, from all three branches of state government, were the authorities at every stage of this lawmaking endeavor.

Proposal 2 (now Article IV § 6 of the Michigan Constitution) removed representative democracy from this process. In its place is an unelected 13-member redistricting commission selected through random draws from pools of self-appointed applicants. This will be the rarest of political beasts empowered by a document that otherwise vests “all political power” in the people: a lawmaking authority selected with neither a direct nor an indirect connection to a vote of those people.

Not 10 minutes before Fahey is shown speaking about the empowerment of the people, another scene in Slay the Dragon shows a hearing in front of the Michigan Supreme Court. One of the justices is briefly heard voicing a concern over whether the proposal disenfranchises 10 million people in favor of empowering just 13 of them. The film does not reveal how (or if) this concern was addressed, let alone attempt to resolve the irony.

Explicit empowerment of major political parties is another ironic vandalism inflicted by Proposal 2.

Before Fahey and Voters Not Politicians got into the act, the only references to political parties in the Michigan Constitution were restrictions on their power. Describing the membership of four gubernatorially appointed boards and commissions, the document repeatedly prohibits majority control for “the same political party.” (Each of these boards has an even number of seats).

Otherwise, these bodies may be comprised exclusively of minor party representatives or members of no discernible party affiliation at all. Before passage of Proposal 2, no political party of any size was given any power at all by the Michigan Constitution.

But the new redistricting commission requires that three pools of applicants be created, with two coming from persons who affiliate with “major parties” (i.e., “one of the two political parties with the largest representation in the legislature”). The third pool is to be comprised of persons who affiliate with neither major party. Through a process of random selections, each of the major parties will receive four representatives on the commission, and the supposedly independent pool will provide five more.

Neither the term “major parties” nor the notion of same occurs in any other section of the Michigan Constitution. Passage of Proposal 2 resulted in unprecedented recognition for Michigan’s two most powerful political parties and for the first time infused them with constitutionally protected authority. This unique outcome in a document vesting “all political power” in the people doesn’t get mentioned in Slay the Dragon, and it obviously wasn’t a selling point promoted to the voters by … (ahem) … Voters Not Politicians.

Instead, the film repeatedly portrays Fahey and Voters Not Politicians as selling an “independent” commission. Although deceptive, that’s not an accident. Support for a third major political party has been at or near 50 percent in Gallup polling for more than a decade and began reliably bouncing near 60 percent after the 2012 election. This furious resentment with the performance and influence of the two largest parties was surely some—and possibly almost all—of the fuel that fired support for Proposal 2.

Everything about Voters Not Politicians—down to the name itself—was meant to convince Michigan voters they could inflict a staggering blow on the political machines. But as with the slanted portrayal in Slay the Dragon, it kept quiet about the fact that one of those big machines was pouring a stupendously lopsided fortune into the effort to advance its own partisan objectives.

At the end of her victory speech in Slay the Dragon, Fahey shouts enthusiastically to the crowd: “Way to [expletive deleted] change the Michigan Constitution!” Said with angry sarcasm, this would have been a fitting statement to end a profoundly deceptive film.