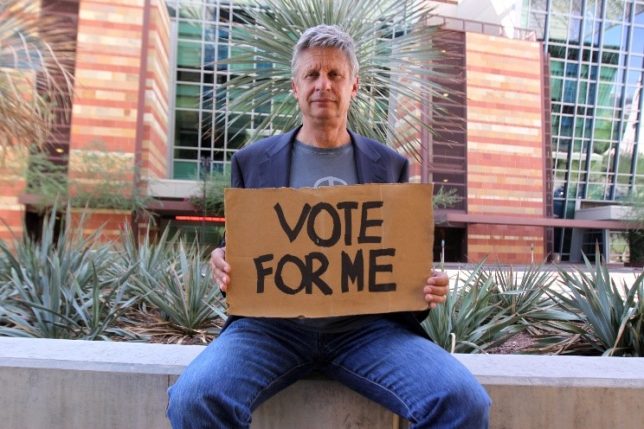 The Myth of the Obsolete GOP

Slay the Dragon more innocently stumbles into some of the fictions because of a lie the filmmakers have told themselves. Contrary to their mythology, the 2008 election results did not presage a long-term political majority favoring their big government ideology, nor electoral obsolescence for Republicans. It didn’t even ring in a short-term trend.

The film portrays the 2010 midterm election as just an isolated success in state legislative and gubernatorial races by Republicans aiming to seize control of redistricting. It was far more than that. Republicans won an outright majority of all votes cast for candidates from every political party in all 435 congressional seats in 2010, trouncing Democrats by more than 5.7 million nationwide. Just in Michigan, the GOP advantage over Democrats for all congressional seats was more than 250,000. Republican congressional candidates even scored the most votes in New Jersey. Republicans picked up 63 additional U.S. House seats in 2010 and control of the chamber, the largest changeover of seats in 72 years.

The central argument of Slay the Dragon is that Republicans needed to draw biased redistricting maps in 2011 because the party had scant hope of otherwise winning congressional majorities. This premise was demolished before the mapmaking ever occurred. More pointedly, Republicans won control of the mapmaking after the 2010 midterms precisely because they were able to win a majority when it counted.

And that’s not the most powerful evidence against the “dead GOP” narrative. Googling “Hillary Clinton won the popular vote” will return more than 69,000 results. Although obviously a very trendy talking point on the left, it is a rhetorical security blanket with big holes.

The 2016 presidential election featured the two highest unfavorable rankings for major party nominees in the history of Gallup polling, with Trump disliked by 61 percent and Clinton by 52 percent. Either running against just about anyone else would likely have faced electoral annihilation. Democrat Walter Mondale, who lost 49 states to Ronald Reagan in 1984, did so despite a 66 percent favorable rating from Gallup. Republican Mitt Romney, loser to Barack Obama in 2012, had a 55 percent favorable rating.

The U.S. presidential high-water mark for the Green Party was the 2000 election, when Ralph Nader won 2.9 million votes nationwide and was widely blamed by Democrats for denying Al Gore a win in Florida, which could have secured him the presidency. Similarly, Libertarians are often credibly blamed for draining votes from Republicans, never more so than in 2016 when the ticket featured two former GOP governors.

Assigning the 2016 Libertarian votes to Trump and the Green votes to Clinton gives the hypothetical libertarian/Republican “smaller government” coalition the lead in the popular vote (with more than 49 percent of the total votes cast) and provides Trump with 20 additional electoral college votes because he would have added wins in Nevada, Minnesota, and New Hampshire. Further adding the popular votes of independent candidate Evan McMullin (a former U.S. House Republican staffer who became popular with many otherwise GOP voters) and Constitution Party candidate Darrell Castle (another right-of-center candidate) yields more than 50 percent of all votes cast for U.S. President in 2016.

Candidates running on small-government conservative or libertarian ideologies won an outright majority of the popular vote in 2016. Hillary Clinton’s plurality was achieved due to the unprecedented and extraordinary unpopularity of the Republican nominee she was lucky enough to run against, but still incapable of defeating.

Deeply flawed though it may be, the “GOP is demographically dead” myth spun by Slay the Dragon is essential to the film’s argument that Republicans had to engage in some historically unprecedented level of gerrymandering to ward off their demise. Essentially arguing the Republican mapmakers were cheating, the moviemakers needed a motive for the alleged evildoing. But exhibit A in their evidence is bunk.

There’s another problem with the “Republicans drew cheater maps” argument: They weren’t very good at it. Once again, the selective half of the story told in Slay the Dragon turns the truth on its head.

More than an hour in, the film reveals a 2011 email exchange between Bob LaBrant of the Michigan Chamber of Commerce and Jeff Timmer, a Michigan political advisor and redistricting professional affiliated with Republicans. [Disclosure: Jeff has been a friend for more than 30 years but was not consulted for this film review.] In the back-and-forth messages, Timmer presents maps he says will provide a “solid 9-5” congressional delegation from Michigan.

Smoking gun? Proof the Michigan Chamber of Commerce and Republicans were cooking up extra biased maps?

Michigan’s Democratic voters have been cooking up their own biased maps by stubbornly living next to each other.

Four of Michigan’s most densely populated (and thus geographically smallest) current congressional districts—the 9th, 12th, 13th and 14th—are packed together in the southeast corner of the state (see Figure 1). Taken as a whole, these four encompass the entire city of Detroit, the city of Ann Arbor, most of the suburbs in between the two, plus many of the immediate northern and southern suburbs of Detroit. It was relatively easy for congressional mapmakers in 2011 to gather a disproportionate share of Michigan’s Democrats into a tightly drawn little box in the southeast corner of the state. It wasn’t some clever manipulation of census data. Democratic voters did almost all the hard work before the mapping computers ever fired up. 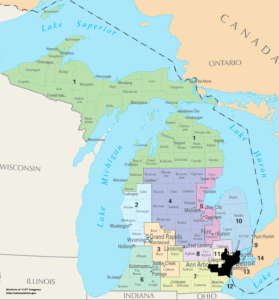 This relatively tiny patch of the state’s land contains 28 percent of its population, but roughly 35 percent of its Democratic voters (as measured by the 2018 midterm congressional election) and just 14 percent of the Republican voters. Overall, it voted 71.8 percent Democratic in the last congressional election. The Republican in the least Democratic seat of the bunch (the 9th) still got less than 37 percent of the vote. While the internal lines between these four districts are jagged and ugly (as they must be when densely packed communities need to be divided evenly by population) the outside borders of the whole provide a reasonably compact representation of where a large hunk of the people of Michigan live.

Could a Democratic map maker have gotten a slightly more favorable map for Democrats? Sure. Would that have happened if Democrats had won the map-drawing power in 2010? Absolutely. Would it change the fact that it’s tough to geographically unpack and divide-up Michigan’s tightly clustered Democratic voters? No.

An interview with LaBrant shown in Slay the Dragon has him briefly saying “Democrats tend to cluster in urban cities” and “Republicans are more spread out.” The film makes zero effort to examine how profoundly correct this is or even to challenge the assertion. It’s a key reason why a representative map might be expected to sometimes return nine Republicans out of the 14 seats. But LaBrant’s highly relevant point is dismissed with a horribly misleading statement that appears on the screen: “He [LaBrant] blames skewed election results on geography.”

And the maps didn’t always work. In the 2018 midterm election, Republicans won only seven of Michigan’s 14 congressional seats. Two years earlier, a limited government majority of Donald Trump and the Libertarian Party candidate won more than 50 percent of the vote in Michigan. Right now, Democrats hold a 7-6 advantage over Republicans in the state’s congressional delegation. (Shortly after the 2018 election, Republican Congressman Justin Amash declared himself an independent.)

But once again Slay the Dragon fails to reveal that the Michigan map didn’t return a Republican majority or mention the 2018 election results at all. It’s unpleasantly easy to run out of original ways to keep pointing out the deceptions that repeatedly leave the film’s viewers measurably more ignorant about the subject than if they had merely read the back of a box of Froot Loops.

In the next installment of “Slay the Dragon,” see who really benefitted from changing the Michigan Constitution.