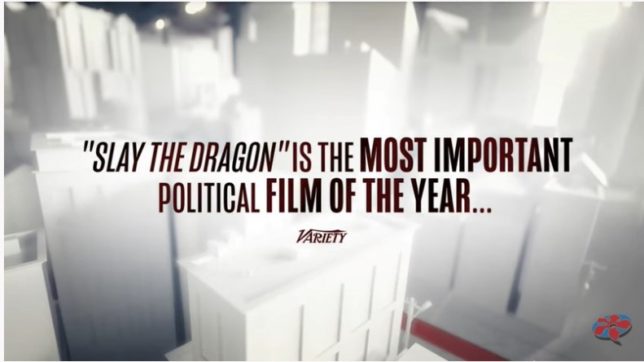 The tale told in the new documentary Slay the Dragon is that all the evil in America—or at least most policy decisions leftists assume to be evil—is the fault of political maps drawn by the people’s elected representatives—that is, state legislatures. The film is a deceptively presented apologia for removing representative government from this process. Although the United States has survived and thrived despite two centuries of the partisan map drawing named after former Massachusetts Gov. Elbridge Gerry (who later became President James Madison’s vice president), the producers of Slay the Dragon argue gerrymandering has now become an assault on democracy itself.

The film makes a mighty effort to conceal its major argument: When it comes to political mapmaking, we must save democracy by eliminating democracy. Slay the Dragon’s critical supporting points are similarly hidden within ironies and misdirections. At some points, the film devolves into Slay the Strawman.

Myth of the Grassroots Underdogs

The movie’s central fable is the portrayal of a supposed grassroots underdog army of apolitical Michigan activists whose 2018 alteration to the state’s constitution put political redistricting decisions into the hands of an unelected commission. Just over a half hour into the film, one top staffer on what became the Proposal 2 ballot campaign declares his committee—Voters Not Politicians—will be decisively outspent by the opposition. He predicts Voters Not Politicians would be “lucky” to face a funding disparity of merely four to one. He confidently fears it will probably be 10 or 20 to one. 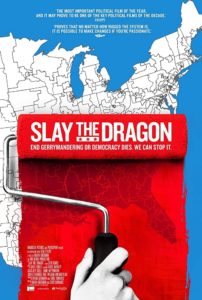 What you won’t learn from watching Slay the Dragon is that there was indeed a better than four to one funding disparity . . . but it went the other way. Keep this undisclosed fact in mind, as it informs many of the film’s deceptions.

Voters Not Politicians received $13.9 million in its quest to pass Proposal 2, versus an opposition that raised $3.2 million. In its report on this development, Bridge Magazine, a Michigan political publication for big government sympathizers, characterized the $13.9 million as a “staggering” total.

These figures were reported 11 days before the November 2018 election. Slay the Dragon shows the Voters Not Politicians campaign all the way through its victorious party on election night yet never corrects the record. The film even doubles down on the misperception, showing an anti–Proposal 2 video as an example of what the supposedly outmuscled grassroots heroes were up against.

The charitable interpretation of this omission is to say it is an example of recklessly incompetent propaganda. But that’s much too generous. There is no innocent excuse for professional filmmakers documenting this story from start to finish to somehow mangle the fundraising disparity into exactly the opposite of what happened.

It wasn’t a mere fact-checking error. The producers of Slay the Dragon flat out lied, deliberately disrespecting their audience and seeking to turn the viewers into misinformed fools.

There was a powerful motive for telling that lie. Looking into the truth about the big money that poured into Voters Not Politicians would raise an obvious question about where that money was coming from.

The largest funder (at $5.5 million) was the Sixteen Thirty Fund, a left-wing lobbying and advocacy fund that Politico credited with spending “$140 million” on “Democratic and left-leaning causes” during the November 2018 midterms. Sixteen Thirty is managed through the massive Arabella Advisors network of left-wing advocacy organizations. (Arabella Advisors is the subject of Big Money in Dark Shadows, a comprehensive research report from the Capital Research Center.)

Another $1.4 million in combined funding was given by four decisively left-leaning or Democratic Party–favoring funds. The National Redistricting Action Fund, the advocacy arm of the National Democratic Redistricting Committee, kicked in $250,000. An affiliate of the SEIU, a major left-leaning labor union, gave $500,000. The Quadrivium Foundation, also a generous donor to the left-leaning Environmental Defense Fund, gave $500,000. And the big labor bosses at the National Education Association chipped in $125,000.

With a donation of $5.1 million, the Action Now Initiative was nearly as generous as the Sixteen Thirty Fund. The Bridge Magazine report revealed that the busybody Action Now was also the source of funding for a proposal to place a new tax on sugary soft drinks in Oregon and similar redistricting proposals in other states.

In revealing the big financial advantage from lefty funders enjoyed by Voters Not Politicians, Bridge Magazine noted that the group had been promoting itself “as a bipartisan coalition fueled by a grassroots army bent on reforming Michigan’s redistricting system.” Scene after scene rolls by in Slay the Dragon to reinforce this perception. Campaign leader Katie Fahey is introduced in the film as a political neophyte who doesn’t “do politics for a job.” During an interview on Off the Record, a public television political roundtable in Michigan, she cleverly pivots from a question about whether big money will be raised by her campaign, sticking with an answer that keeps her amateur-hour, grassroots image in place.

But beyond the truckloads of lefty money raining down on Ms. Fahey’s project, there is more that rattles apart her “grassroots” mythology, yet—and this becomes a theme—is conspicuously absent from Slay the Dragon:

Katie Fahey may not literally have been doing professional political work before launching into her richly funded left-wing crusade. The Bridge Magazine report says she was “working in environmental sustainability.” But at a minimum she was a strongly partisan supporter of Hillary Clinton. And the least suspicious characterization of what happened afterward is that she became the Forrest Gump of Michigan politics, fortuitously tripping over board members friendly to Democrats and a stupendous pile of partisan-left money that she used to bury her opposition.

Life is indeed a box of chocolates, and you never know what you’ll find. But if it contradicts the myth that Voters Not Politicians was a bunch of underfunded, grassroots underdogs, you won’t find it in Slay the Dragon.

In the next installment of “Slay the Dragon,” learn which side actually spent more on the campaign.