Setting the Record Straight on AIPAC and Omar’s Anti-Semitism 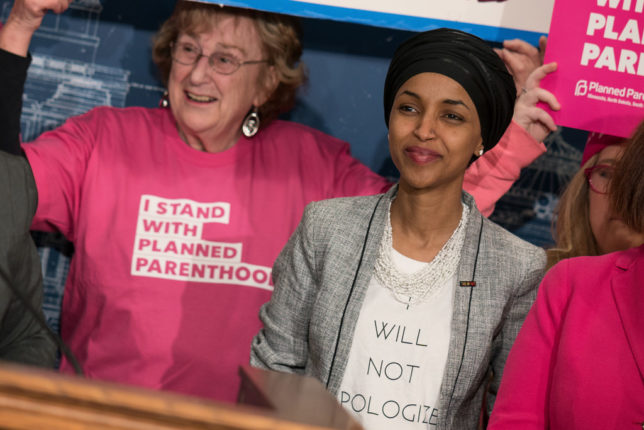 U.S. Representative Ilhan Omar (D-MN) has stirred controversy with two tweets claiming the American Israel Public Affairs Committee (AIPAC) and pro-Israel money are the reason why the vast majority of U.S. political leaders—and 64 percent of Americans—sympathize with the Israelis over the Palestinians. To determine whether Omar is committing anti-Semitic “dog-whistling,” or just accurately assessing bribery of American politicians and “hypnotizing” of the public, let’s do as Rep. Omar suggests and consider AIPAC and the pro-Israel lobby.

AIPAC is not a foreign principal, it is an American nonprofit based in Washington, D.C. The Israeli government and other Israeli foreign agents have spent just under $50 million in political lobbying since 2017 to address a variety of issues relevant to the United States such as trade or technology. However, Israel isn’t the only foreign influence to lobby the American government. To fairly account for the money Israel spends, we should also consider the $30 million from Saudi Arabia, the $20 million from Qatar, the $36 million from the United Arab Emirates, or the political lobbying money from any of the other 27 countries that refuse to acknowledge the state of Israel.

Is AIPAC—as Omar suggests—all about the Benjamins? AIPAC, a 501(c)(4) social welfare organization founded in 1963, took in $106 million in revenue as of 2016, and spent just under $58 million on its programs. The organization’s IRS filing shows AIPAC’s top expense was its three-day conference at just under $45 million. At a distant second was $10 million for membership events and activities for both lobbying and education. AIPAC does engage in lobbying, employing ten lobbyists in 2018 at $3.5 million. But in that same year, AIPAC only spent a total of $27,000 in campaign contributions. In fact, for the 2018 midterm elections, Senator Tim Kaine (D-VA), Rep. Ro Khanna (D-CA), and Rep Tony Cardenas (D-CA) were the top three recipients of AIPAC election donations; they received only $5,400, $4,700, and $3,000, respectively. As a reference, Tim Kaine’s 2018 re-election campaign committee in Virginia received nearly 23 times the contributions from AIPAC’s left-wing competitor J Street.

Perhaps a better question to ask is does AIPAC have a particular or disproportionate share of lobbying or electioneering money? J Street, a relatively smaller organization founded in 2007, had $3.5 million in revenue as of 2016, though that excludes the group’s 501(c)(3) affiliate group, J Street Education Fund, which received $5.5 million (but also took in $10.5 million the prior year). Nevertheless, J Street’s money makes a much bigger impact in electoral activity: the 501(c)(4) spent nearly $3 million on its program that year. According to the Center for Responsive Politics, J Street in 2017 spent $400,000 for its four lobbyists. That is smaller than AIPAC’s lobbying, but the left-wing group spent over $4 million in electoral contributions. The pro-Israel lobby as a whole—which includes renegade J Street so it can hardly be called a unified coalition—gave just over $5 million to political campaigns in 2018.

To put this all into perspective, Pharmaceutical Research & Manufacturers of America spent nearly $15 million in lobbying in 2018 alone, and employed 181 lobbyists. The Health sector used $556 million to lobby government, easily making it the highest spending special interest. When compared to corporate lobbying, ideologically based interests are in a much lower weight class in the political boxing match.

Furthermore, pro-Israel lobbying is not even the highest industry in the “single-issue” lobbying sector. “Human Rights,” remains by far the highest at $50 million. Also, to show a comparison, since 1998, the pro-abortion group Planned Parenthood has used $17.6 million for lobbying and hired up to 15 lobbyists at a time for its cause. As CRC’s Michael Watson has pointed out, Planned Parenthood also spent nearly $6.5 million to help elect Democrats in the 2018 midterm elections.

After withstanding increased criticism from those objecting to Omar’s one-sided critiques, Speaker Nancy Pelosi (D-CA), the official House Democratic leadership, and the left-wing Anti-Defamation League condemned her statements and even forced Rep. Omar to make an apology.

However, Rep. Omar also had plenty of defenders, such as journalist Glenn Greenwald, who suggested the GOP critics were trying to punish Omar for her “free speech.” Even after the early backlash, Omar continues to criticize AIPAC, reiterating in her apology that she will “reaffirm the problematic role of lobbyists in our politics.”

It is important to note that Christians United for Israel (CUFI) is arguably the largest pro-Israel group in the U.S, although CUFI’s Christian religious exemption makes it unclear how much money the organization spends, because religious nonprofits aren’t required to reveal as much as secular ones. Nevertheless, CUFI’s status as a primarily Christian religious institution is overlooked in favor of the primarily Jewish membership of AIPAC.

The United States has supported Israel’s statehood and right to defend itself since the country’s founding. Gallup polls show Israel has a 74 percent approval rating from the American people and its favorability has increased over the past two decades. Which means that despite its spending, AIPAC hasn’t changed America’s foreign policy as it relates to Israel. In fact, plenty of research suggests that lobbying is used to support individuals who already agree with the cause. This phenomenon fits the fact that AIPAC is “successful” mainly because its views are already congruent with American political culture.

It would be very hard to imagine that AIPAC could convince Rep. Omar to abandon her belief in the harshly anti-Israel movement known as Boycott Divest Sanction (BDS), no matter how much money it spent to lobby her. But if she genuinely believes Sen. Tim Kaine was “bought” by AIPAC’s $5,400, then how much did the $5,000 from the Council on American-Islamic Relations (CAIR) inform her opinion on Israel?