Dems hope vote by mail will give advantage in Virginia governor's race. 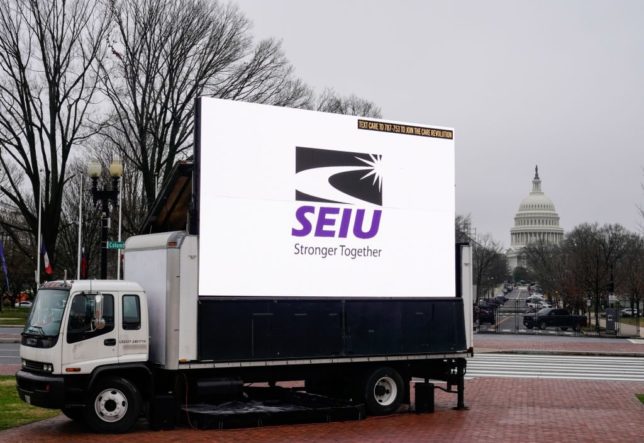 One of the largest and most politically active unions in America gave $40,000 to a group that registers Virginians to receive absentee ballots in an effort to bolster Democratic turnout for the gubernatorial election.

The Service Employees International Union (SEIU) endorsed a mailer that contains a partially pre-filled absentee ballot application form sent by the D.C.-based Center for Voter Information, a left-of-center vote-by-mail advocacy group. The mailers, one of which was obtained by the Virginia Project, have targeted over two million voters across 134 Virginia counties and cities, urging them to register for mail-in ballots ahead of the November election, when Virginians will vote for their next governor and control of the House of Delegates.

The SEIU—which in 2020 gave $40,000 to the center—has encouraged mail-in voting, and its logo affixed to the mailer indicates an institutional endorsement of the registration campaign.

Higher voter turnout driven by mail-in ballots may prove crucial to former governor Terry McAuliffe’s (D.) reelection campaign, particularly in populous Fairfax County, a Democratic stronghold that the Center for Voter Information plans to flood with nearly 420,000 mailers. Mail-in ballots have typically favored Democrats, with Biden voters twice as likely as Trump voters to vote by mail in the 2020 election. A Republican victory in Virginia would be a sign of trouble for Democrats ahead of the 2022 midterm elections.

Jason Snead, the executive director of the watchdog Honest Elections Project, said the left supports voting by mail to secure more votes, even with a cost to election integrity.

“The left ultimately wants mail-in voting without ballot safeguards in every election, automatically delivered to every voter, a permanent early voter list, no voter ID—it’s always vote by mail plus these other things,” he told the Washington Free Beacon. “But these mechanisms have been repeatedly shown to have security problems which allow for fraud, coercion, bribery, and vote-buying.”

The center ran a vote-by-mail campaign in 2020 that targeted 15 million voters in swing states. It calls those voters the “New American Majority,” a left-leaning bloc that consists of “young people, people of color and unmarried women” whom liberal strategists consider “central to progressive long-term success.” A February Time article hailed the center’s success in registering 4.6 million new mail-in voters as a secret reason for Democrats’ winning the 2020 election.

Although the Center for Voter Information is officially nonpartisan for tax purposes, it spent $583,000 in outside expenditures that directly aided 2020 Democratic candidates, including Joe Biden.

The center’s founder, Page Gardner, is a former Bill Clinton campaign staffer who has advised Democrats on partisan voter registration efforts among the “New American Majority” to cement progressive control over Congress and the White House.

An SEIU political director in 2016 spoke alongside Gardner at a Democracy Alliance panel on “opportunit[ies] to take back many states from right-wing control.” The Democracy Alliance is a major networking group for left-wing donors and strongly supports the center’s activism.

Other donors to the Center for Voter Information include the left-wing Sierra Club, League of Conservation Voters, and Tides Foundation, which in 2017 gave the center $25,000 for “mobilizing unmarried women in the 2018 [election] cycle.” The group’s 501(c)(3) “sister,” the Voter Participation Center, since 2012 has received at least $838,000 from the AFL-CIO and other labor unions to conduct joint vote-by-mail registration drives.

This article originally appeared in the Washington Free Beacon on September 22, 2021.