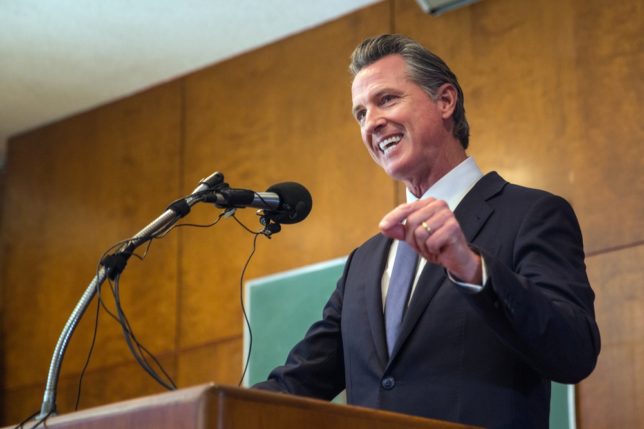 Before we get into the situation in California, some definitions and background are necessary. Under the National Labor Relations Act, which applies to most of the private sector, labor unions are organized and negotiate at the workplace or company level. While unions may engage in “pattern bargaining” through which they target one employer in an industry and region (the classical example is the UAW choosing which of the Detroit Three unionized automakers to negotiate with first) to set a contract baseline for the industry and region, contracts themselves are negotiated at a firm or plant level. Whatever agreements are made apply to only the organized plants. Non-union firms are free to compete in the industry so long as they follow the applicable laws.

Labor unions do not like this competition and seek to stamp it out wherever possible. For example, “prevailing wage” is a set of minimum labor cost rules that preference unionized contractors in government construction projects. Company-by-company and firm-by-firm organizing is costly, can fail, and can open paths for new competitors to enter markets.

Enter the French (and most of Continental Europe). For all the jokes about striking Frenchmen, a smaller proportion of the French labor force is unionized than of the American labor force, with union members accounting for only 8 percent of French workers versus just over 10 percent of American workers. Nevertheless, French unions are regarded as politically and economically stronger than their American counterparts because of sectoral bargaining.

In sectoral bargaining, unions negotiate with the government and industrywide associations of employers on contracts that apply to everyone, not just union members. As a result, French collective-bargaining contract coverage is nearly universal. Most other Continental countries have some form of sectoral bargaining as well.

That brings us from Bordeaux to Napa (and the rest of Big Labor’s Golden State). The California legislature, dominated by Democrats backed by labor unions, advanced a sectoral bargaining bill called the FAST Recovery Act targeting counter-service restaurants. According to Matt Haller, CEO of the International Franchise Association (IFA), a trade group for franchised businesses, including fast food restaurants:

The legislation would create a council of unelected political appointees to set labor rules for quick-service restaurants. This would allow the unions to bypass the Legislature to mandate a $23 minimum wage and force franchise owners to write a blank check for unaffordable benefits for hourly workers. Business owners and voters would have no recourse.

No prizes for guessing that the Service Employees International Union (SEIU), which has spent tens of millions of dollars trying to unionize fast food restaurants under the banner of “Fight for 15,” backed the legislation. The union and associated worker centers were deeply involved in aiding research conducted by the labor union–aligned UCLA Labor Center that supposedly showed the need for the legislation.

The likely short- to medium-run effect of the legislation would be a massive hike in restaurant prices. An estimate by a University of California, Riverside, professor commissioned by IFA estimated the law would cause an increase of up to 22 percent, depending on how much the new board raised minimum compensation. In the longer run, by limiting competition and entry of new franchised businesses, the unions would likely boost their organizing power and revenues using the new sectoral labor rules as leverage.

While California Governor Gavin Newsom’s budget department (the California Department of Finance) filed opposition to the legislation, Newsom’s political career has been heavily supported by the SEIU and its local unions, to the tune of at least $607,800 according to FollowtheMoney.org (a project of OpenSecrets). On Monday, the governor announced he had signed the legislation.

Sectoral bargaining continues to hold sway with a labor union movement desperate to restore its position of power in the economy. California has always been friendlier to labor unionism than its Nixon-Reagan heyday of Republicanism suggests it “should” have been.

Just as one who has too much of the fruit of Napa or Bordeaux will likely feel it in the forehead, an economy too constrained by organized labor will also struggle in the cold light of day. In the 2020 Census, California lost a U.S. House seat for the first time since it gained statehood in 1850. New York, its east coast brother in big states with over-powerful unions, has lost seats since the mid-20th century, falling from a maximum of 45 to only 26 after the 2020 Census.

Meanwhile, the right-to-work states (meaning that employment contracts in those states cannot compel payment of fees to a union) such as Georgia, Texas, and Florida have grown substantially, in no small part due to their favorable business climates. California’s literal climate seems to have protected it from at least some of the ruin that has befallen New York from its organized-labor-favoring economic policies, but that may not continue.