‘Roseanne’ and the Game of Identity Politics 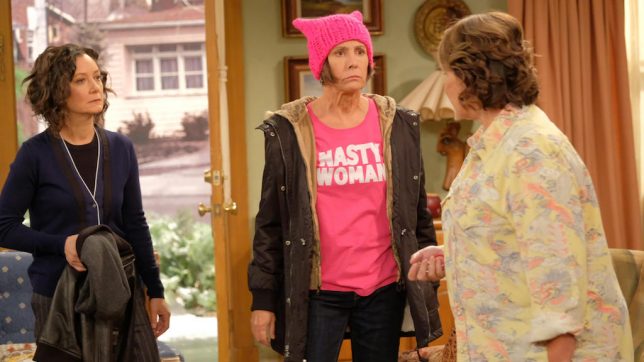 This article originally appeared in American Greatness on April 26, 2018.

Margaret Thatcher said, “First you win the argument, then you win the vote.” I wish that were true. Usually, it’s not.

People don’t often decide how to vote by weighing carefully the pros and cons of each issue and the qualifications of each candidate. People’s political identities are rooted in their cultural identities and in their answers to the question: Who will fight for someone like me?

Which brings us to the recently revived sitcom “Roseanne.”

Originally broadcast from 1988 to 1997, it was a top-four show for six of its nine years. TV Guide in 2002 ranked it at No. 35 among the greatest shows ever. Realistic by TV standards, it depicted a working-class family, with both husband and wife working outside the home, struggling to get by. In a recent column, Kareem Abdul-Jabbar called the show’s main characters “damaged but defiant, their tattered lives McGuyvered together with duct tape, job sweat, and grocery coupons.”

The original show was frequently controversial; episodes dealt with racism, homosexuality, and the discovery of mom and dad’s old marijuana stash. In the revival, the character Roseanne is a Trump supporter, sparring with her sister who, in the first episode, wore a “Nasty Woman” t-shirt and greeted Roseanne with “What’s up, Deplorable?”

The Ground Has Shifted

Roseanne Barr, the comedian who heads the ensemble, was long considered a woman of the Left. In 2012, she ran for president as the Peace and Freedom Party’s nominee, with anti-war activist Cindy Sheehan as her running mate. In 2016, she backed Trump.

Hillary Clinton, Barr said in 2016, was “friends with everybody that gives her any g**d****d money.” Illegal immigration, she said, was “a scam.” NAFTA, she said recently, was “what broke all the unions and we lost all our jobs, so I think that’s a large part of why they voted for Trump because they didn’t want to see it continue, where our jobs are shipped away . . . ”

Roseanne Conner, the character, voted for Trump because, she told her sister in the first episode of the reboot, “He talked about jobs. He said he’d shake things up.”

The Conner family now includes a grandson who’s effeminate (which bothers his granddad, but only out of concern about bullying at school) and a granddaughter who’s apparently African-American (her father, Roseanne’s son, is back from service in Syria while his military wife remains overseas). Roseanne loves her grandkids. She and her husband also proclaim their acceptance of their tomboyish “gay” daughter, who keeps reminding them, “I’m not gay!”

Some left-wingers reviewing the show called Roseanne’s loving behavior inconsistent, given that Trump supporters are, as everyone supposedly knows, homophobic and racist and so on. Meanwhile, anti-Trump conservative columnist Ben Shapiro complained, “The whole premise of ‘Roseanne’ is that this pro-abortion, pro-LGBT woman who is happy to watch her grandson wear girls’ clothing voted Trump—because she’s blue collar. That isn’t an accurate depiction of Trump voters. It’s actually a Hollywood fantasy of what Trump voters are: people who agree with Hollywood elites on values, but just disagree on economics because they’re old white factory workers.”

But it’s not about economics. It’s about identity.

Here’s a clue: In Episode 3 of the revival, another granddaughter, a teenager rebelling against the rules of the household, called Grandma Roseanne a “stupid old hillbilly.” In response, Roseanne grabbed the girl and held her head under the water in the kitchen sink, declaring, “Welcome to the hillbilly day spa!” Roseanne Conner is not really a hillbilly—the Conners are from suburban Chicago—but she’s a hillbilly in the sense that left-wing racists of today use the term: a working-class, Trump-supporting member of the group disparaged as “poor white trash.”

Republicans ignore at their peril the importance of this blue-collar identity. In the recent special election for Congress from Pennsylvania—in a heavily pro-union district where the previous Republican congressman had a 44 percent lifetime AFL-CIO rating—the GOP candidate, Rick Saccone, came across as too much of a standard, Paul Ryan-aligned Republican. Michael Balzano, who was labor chairman for the Reagan campaign, noted that, a few days before the election, Saccone was asked about right-to-work laws, and “flanked by union supporters, he embarrassed them by trying (not very successfully) to explain how right-to-work laws are not a hindrance to unions willing to compete.” Republicans lost the seat because they forgot, if they ever really learned, the lesson of Trump’s candidacy, of the need to empathize with people, speak their language, and make solving their problems the top priority.

In 2016, Trump’s implicit promise was like that of a lawyer: to do the best job possible of representing your interests, whatever your interests might be.

That attitude has earned him the undying loyalty of millions. (“I could stand in the middle of Fifth Avenue and shoot somebody and I wouldn’t lose any voters, OK?”) Yet, to many old-line conservatives who put ideology first, Trumpism represents the sort of politics practiced by people on the Left. They despise him for it.

Conversely, leftists hate Trump for his use of identity politics precisely because he is so good at it, good enough to bring the real Roseanne Barr and the fictional Roseanne Conner into the fold. Leftists’ great fear is that, in the end, Donald Trump will beat them at their own game.