An Interview with Mark Janus, Right to Work Hero 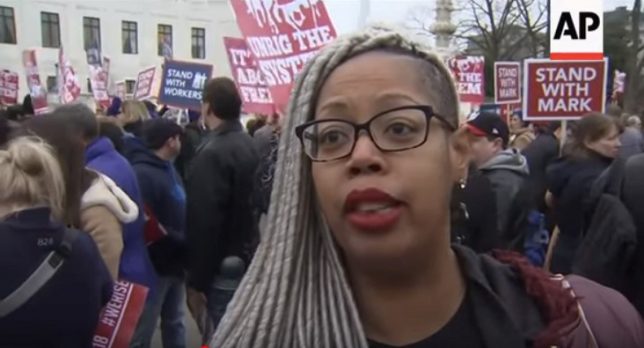 How did your co-workers respond when they learned about your case?

Janus: Once my case began working through the federal courts, I kept my involvement pretty quiet. I wasn’t sure of the response I would get. Of course, I knew there were the members that would not like it. However, over time, as the case gained attention and I began traveling to speak about the case, the “word” got out. Surprisingly, I had quite a few coworkers express their support. They were happy to see something done. Like me, they didn’t agree with the union’s position in many areas and were fed up with having to pay these “fees” to belong to an organization they didn’t agree with.

The full share union members essentially ignored me. There was very little comment. When I would pass a union member in the hall and say “Good Morning,” they would just pass me as if I didn’t exist. Still, I was happy in my job as a child support specialist and my day-to-day work was not affected.

What is so political about paying agency fees? After all, even workers who opt out of membership receive the same set of services from their union.

Janus: Agency fees are “political” due to the very fact they were mandated by legislation. The union asked for and received the sole representation for many workers in Illinois and elsewhere. And how did they get that legislation introduced and passed? By contributing to the political campaigns of politicians that they knew would do their bidding.

Moreover, these forced dues and agency fees grant government unions so much unchecked political power they are able to demand employee-compensation packages so lavish they have literally pushed several states to near bankruptcy—including Illinois.

Do you think the unions will die out altogether, or will this ruling force unions to treat workers more like customers?

Janus: Public sector unions must adapt to playing in a competitive marketplace where government workers finally have a choice. They will survive if they can prove their value to members and potential members. I would hope that government unions will pay more attention to their membership and be more responsive.

What was it like to be in the Supreme Court as your story was being told and oral arguments were being delivered?

Janus: Overwhelming. To hear your name called by the Chief Justice of the U.S. Supreme Court made the hair stand up on the back of my neck. It was a thrill and humbling almost simultaneously. As the attorneys argued the case and the justices asked their questions, the reality really set in as to the magnitude of this case. Here were arguments being made that would affect workers all over the country. This had national implications. Simply amazing.

Of course, the high point was the ultimate decision by the Supreme Court after over three years of litigation. But were there any low points? Was there any point where you wondered why you filed suit back in June 2015?

Janus: I would say the low point of the case was the social media. Of course, I knew the union would be fighting against it, but to see my name in op-ed pieces, being referred to as pariah, the “pawn” of big business, right-wing extremist, etc. I was just a guy trying to fight for my First Amendment rights to make my own decision. We freely make decisions every day. But here was a union telling me I had to pay a “fee” to work in government or I’d lose my job. That just wasn’t right.

I would also say the waiting was difficult. Real life litigation is nothing like an episode on TV that plays out in an hour. This went on for three years.

In the conclusion of CRC’s interview with Marc Janus, learn how Janus and the Liberty Justice Center continue the fight for worker freedom.