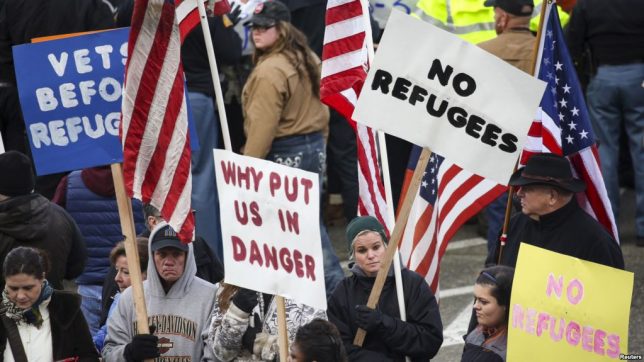 Currently, sixteen states and San Diego County, California, have quit the refugee resettlement program. This does not mean the program ends, however; it just means that the state now has lost whatever control over the program it ever had. A controversial alternative program appoints a VOLAG to take over management when the state drops out. Such states are referred to as Wilson-Fish states, based on a 1984 law named for the legislation’s congressional authors. The law called for alternative methods to provide welfare to refugees, but never anticipated assigning VOLAGs oversight of state programs. The program was manufactured from whole cloth by HHS regulation during the Clinton administration. Recent state dropouts include Maine, Kansas, New Jersey, and Texas. These states dropped out in protest over the federal government’s unresponsiveness to terrorism concerns. However, this did not help the states.

When State Department, ORR, and U.S. Citizenship and Immigration Service monies are counted, VOLAGs are paid up to $5,000 or more for each refugee they resettle, so they seek to maximize refugee numbers, and find it much easier to do so in states with no oversight. The numbers make the case. Between FY 2002 (the earliest state-by-state refugee resettlement data available) and FY 2018, Alabama, Alaska, Kansas, Kentucky, Maine, Nevada, New Jersey, North Dakota, Tennessee and Texas dropped out. Of these, five have been run by VOLAGs long enough to compare resettlement data before the state left the program and after. Table V below shows the results. Note that even in just the first year, refugee resettlement in those states shot up an average of over 50 percent. In total, these states have seen an average annual increase of 127 percent in refugee numbers since they relinquished program oversight. 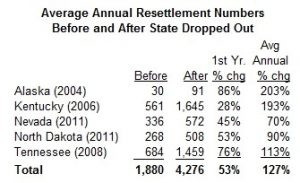 One state, Wyoming, has thus far avoided joining the refugee resettlement program and there are no VOLAG affiliate offices in the state. Of course, that does not prevent refugees resettled to other states from moving there, but few, if any, have. Some state politicians want to initiate a program, but none have been successful to date.

HIAS (formerly the Hebrew Immigrant Aid Society) affiliate HIAS PA receives regular funding for its resettlement work. According to its 2015 990 tax form, it received $1,286,418 from government entities that year. The 990 does not specify the governmental source, however, HIAS PA’s annual report covering that period describes government donations that included the Philadelphia Department of Human Services Commonwealth Advocacy Project, the Pennsylvania Department of Education, even the Mexican Consulate of Philadelphia, and numerous other local organizations with pass-through funding from the Office of Refugee Resettlement and other federal government programs. 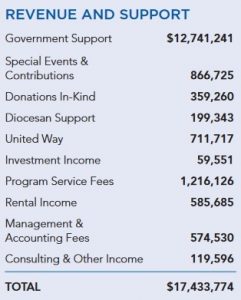 VOLAG affiliate Catholic Charities of Onondaga County (CCOC) is one many Catholic Charities branch offices of the Roman Catholic Diocese of Syracuse, New York. As such CCOC does not file its own IRS tax exempt return. It does, however, publish its own annual reports. In 2016, the latest report available, CCOC took in $17.4 million, $12.7 million of which was received from government. The report does not specify which level of government, but sources at the CCOC confirmed that it receives funding from federal, state and local government.

A story appeared recently in the Syracuse, New York, Post Standard describing how Catholic Charities of Onondaga County expects to lose $600,000 from its refugee resettlement program as a result of the historically low refugee numbers and a corresponding reduction in federal funding since President Trump took office. The article states that resettlement staff of Catholic Charities of Onondaga County have been reduced from 6 full-time and one-part time to one each full and part time.

The New York State government has stepped in to shore up funding. The article quotes Catholic Charities of Onondaga County CEO Mike Melara, who believes that refugee resettlement will resume apace when a new, presumably pro-refugee, administration comes replaces the current one. “[L]ocally, we don’t want to get depleted to the point where we can’t resettle refugees,” he said. So despite having little to do, the goal is to keep staffing levels up in anticipation of future increases—at taxpayer expense.

Catholic Charities of Onondaga County’s parent, the Diocese of Syracuse, lists income of $61.4 million in its 2016 tax filing, with government grants totaling $26.9 million and net assets exceeding $21 million. Revenues for 2016 alone exceeded expenses by $3.5 million. Clearly, the organization is flush with cash, gets huge amounts from the government, and has no problem raising money from a broad base of private donors.

Why should taxpayers be providing additional support to keep Catholic Charities of Onondaga County’s offices open where little work is being accomplished on the hope that when political winds change, those employees will have something to do? This case study provides a window into how refugee contractors and their political allies rip off the public in just one locale, and how difficult it is to uncover the financing.

The resettlement program extends well beyond the boundaries set by federal law, and these contracts appear to be incentives for nonprofits to keep these programs alive–not necessarily because the program is in the public interest, but because it keeps the dollars rolling in. Replicate this situation all over the country to get a sense of the true dimensions of this problem.

In the conclusion of Resettle with Caution, remember the ancillary costs associated with welcoming refugees that aren’t included in initial resettlement.