On Friday, the Capital Research Center (CRC) exposed Rep. Rashida Tlaib (D-MI) who was following an inflammatory anti-Semitic Instagram account. After the original report, Tlaib quietly unfollowed the account and stealthily edited her Instagram bio to say she does not support “all” of the posts of the accounts she chooses to follow. Tlaib’s communications director told CRC the office has “no comment” on the matter.

At the time of the original publication, Tlaib was following the account “free.palestine.1948.” The account compared Jews to rats, called Jews “[n]otorious people unwanted everywhere,” and blamed Jews for the 9/11 attacks. While Tlaib’s office did not respond to multiple requests for comment, Tlaib, however, made changes that made it clear she was aware of the story.

By 4 p.m. ET on Saturday, Tlaib was no longer following the free.palestine.1948 account:

By Sunday, a disclaimer appeared on Tlaib’s Instagram bio. The disclaimer was not originally present at the time of the original report:

The new disclaimer reads, “Note: Following someone or group does not mean I endorse all of their posts.”

Tlaib’s new Instagram bio begs the question: which posts does Tlaib endorse? Considering she was, at one time, following the account, it appears, using her logic, she had to endorse at least some of the account’s posts. Were they the ones blaming Jews for the 9/11 attacks? Or the ones accusing Israeli Prime Minister Benjamin Netanyahu of using “chaos magic” to control the “gentile world?” 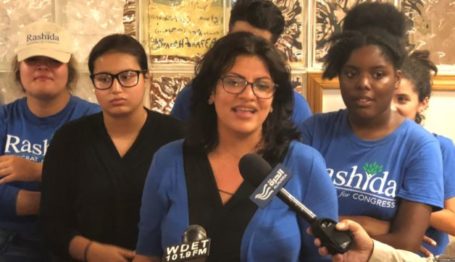