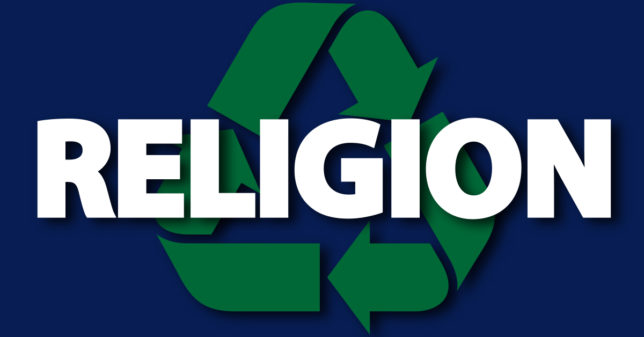 Radical environmentalism, or “Big Green,” is a kind of religion to start with, featuring lots of sins (like driving an SUV or using air conditioning) and even indulgences (carbon credits, which let you make up for those sins). But now some activists are working hard to seduce people who practice old-fashioned religions into switching their allegiance to Green-tinted theology.

This under-the-radar, religion-focused initiative is led by the Forum on Religion and Ecology (FORE) at Yale University. FORE organizes conferences and speaking events, maintains several websites, publishes academic papers and books, circulates a newsletter that reaches approximately 8,000 academic leaders, and supports a graduate program in religious studies. The Forum’s founders described their objective as the creation of “a moral force for transformation that has implications for environmental policy.” FORE brags that it has “been concerned with both ideas and practice, changing worldviews and transformative action.”

What qualifies as “transformative action”? One example—in FORE’s eyes—is the participation of religious leaders in the 2014 U.N. Climate Summit and 2014 People’s Climate March in New York. Unsurprisingly, the latter is sponsored by the Socialist Party USA, Black Rose Anarchist Federation, and Ben Davis Club—an openly Communist group named after a defender of the mass murderer Joseph Stalin.

All this is, you could say, a revelation: It reveals Big Green’s longstanding allegiance to radical left-wing groups and the ever-blurring lines between religion and environmentalism.

For more, you can read the June edition of “Green Watch” here.

This blog post was adapted from the June edition of Capital Research Center’s “Green Watch,” by Steven J. Allen.