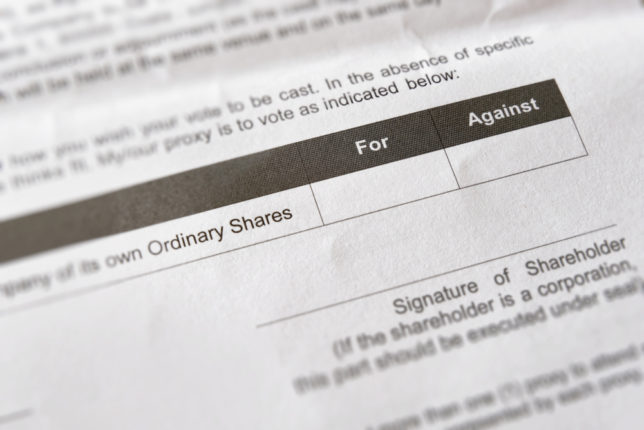 According to the recently released Proxy Preview 2022 report, a record number of environmental, social, and governance (ESG) shareholder proposals have been filed with publicly traded companies in 2022, predominately on left-of-center issues. These resolutions give a good indication of prevailing priorities among ESG-focused shareholder activists.

Shareholder Resolutions and the 2022 Proxy Preview

Shareholder resolutions are generally nonbinding proposals submitted to corporate leadership, to be voted on by other shareholders at the corporation’s annual meeting. ESG-minded activist shareholders often file resolutions to pressure a company into acting on a particular issue that is of importance to the activist(s). These resolutions can be coordinated as part of a broader campaign.

The purpose of a shareholder resolution “is to influence company decision making,” and a majority vote at the annual meeting—or indeed any vote at all—is often unnecessary to accomplish this. Companies can seek to negotiate with a resolution’s proponent beforehand, leading to its withdrawal. Resolutions that are voted on and receive substantial support, even if from only a minority of shareholders, will frequently prompt management to act on the issue.

Proxy Preview 2022, which can be viewed either by creating a free account here or via Politico here, profiles 529 ESG resolutions filed with numerous corporations for this year’s proxy season—a more than 20 percent increase from the same time in 2021.

Climate change was the “biggest single topic” for resolutions, accounting for approximately 21 percent of the total number submitted. Proxy Preview notes that most of these proposals were coordinated by the 501(c)(3) nonprofit Ceres. A majority of the proposals submitted by As You Sow itself concerned environmental issues, and more than a third dealt with climate change specifically.

Many resolutions request that companies adopt or report on emissions goals. For example, Trillium Asset Management filed a proposal with BJ’s Restaurants asking the company to “adopt and disclose independently verified short, medium, and long-term science-based greenhouse gas emissions reduction targets . . . in order to achieve net-zero emissions by 2050 or sooner.” A proposal filed with Dollar Tree by As You Sow requested a report on “how the Company intends to reduce its [greenhouse gas] emissions in alignment with the Paris Agreement’s 1.5 degree goal requiring net zero emissions by 2050.”

The global Say on Climate campaign, which began in 2021 and has received a three-year $105 million commitment from the Children’s Investment Fund Foundation, continues this year. Its objective is for companies to disclose their emissions alongside a plan to reduce those emissions and then submit that plan to an annual shareholder advisory vote. As You Sow has filed at least 17 resolutions that it classified as part of the Say on Climate campaign in 2022. While those resolutions generally request reports on emissions and plans for reducing them, they do not propose annual shareholder ratification.

Another set of proposals targets banks and insurers that finance or underwrite oil and gas development. For example, Harrington Investments and Boston Common Asset Management filed a resolution with Citigroup asking it to commit “to proactive measures to ensure that the company’s lending and underwriting do not contribute to new fossil fuel supplies inconsistent with fulfilling . . . credible net zero commitments.” The idea is similar to what groups like BankFWD have pursued separately.

Some trends are evident within the broad “social” prong of ESG as well. The Proxy Preview report notes that 19 percent of all proposals—101 in total—concerned “corporate political influence.” Climate change played a role in these as well, with 20 proposals filed at companies such as Amazon, UPS, and Honeywell asking for reports on how their lobbying activities aligned with the Paris Agreement. Dozens of other proposals asked for regular reports on lobbying generally and on election-related spending.

Workplace diversity was another common proposal topic—though less so than in 2021—with 48 such resolutions identified in the report. Many of these were filed by As You Sow, and illustrative is the proposal it filed with UPS, which asks for a report “on the effectiveness of the Company’s diversity, equity, and inclusion efforts.” In this context, “diversity” refers specifically to racial, ethnic, and gender considerations. A separate category of “decent work” proposals also featured a number of resolutions asking for reports on compensation differences based on race and gender.

A further 51 resolutions were categorized as “racial justice” proposals, such as one filed by As You Sow with Martin Marietta requesting disclosure of “the Company’s plan to promote racial justice, if any.” Other proposals requested “racial equity audits”—for instance, the SEIU Pension Plans Master Trust submitted a resolution to Wells Fargo urging the bank “to oversee an independent racial equity audit analyzing [Wells Fargo’s] adverse impacts on nonwhite stakeholders and communities of color.”

Relatively fewer proposals on governance were filed in 2022, with the largest portion dealing with board diversity. The Proxy Preview notes that 18 “proposals seek reports on diverse board composition, down from the decade’s high of 48 in 2019.” It attributes this drop in part to developments such as Nasdaq’s new board diversity rule and the shifting recommendations and voting practices of influential proxy advisory firms and large asset managers.

An example of this sort of resolution is that filed by Arjuna Capital with Alphabet requesting an annual report as to the company’s “policies and practices to help ensure its elected Board of Directors attains racial and gender representation that is better aligned with the demographics of its customers and/or regions in which it operates.” Specifically, the resolution notes that Alphabet’s board is 27 percent women and 18 percent “underrepresented minorities,” while those figures are 51 percent and 32 percent nationwide.

Priorities of the Upper Left

The above examples are only a sampling of the hundreds of different ESG resolutions contained in the Proxy Preview 2022 report, which overwhelmingly reflects a liberal ideological outlook. Just 5 percent of proposals—fewer than 30 total—were classified in the report as “conservative” ones.

Much of this discrepancy might be explained by an inherent left-right divide on the merits of keeping business out of social and political issues, but it also likely reflects a disconnect between the priorities of corporate America’s highest echelons and those of the ordinary voter.

A recent survey found just 20 percent of Trump voters, 51 percent of Biden voters, and 36 percent of all voters agreed unequivocally that companies should speak out on social issues—compared to 63 percent of corporate executives. It also found that issues like climate change, racism, racial equity, and gender equality were more important to those executives than they were to voters. The latter were comparatively more concerned with problems like homelessness, mental health, and poverty.

Shareholder resolutions are addressed to corporate management, and dominant voting power is wielded by sophisticated asset managers. Successful ESG resolutions will, therefore, naturally reflect the ideological priorities of this comparatively small group of people. That these may be out-of-step with the priorities of the rest of America, combined with the significant (and unelected) power that corporations hold in our society, is a very good argument against expanding that power to encompass sociopolitically controversial ESG issues.