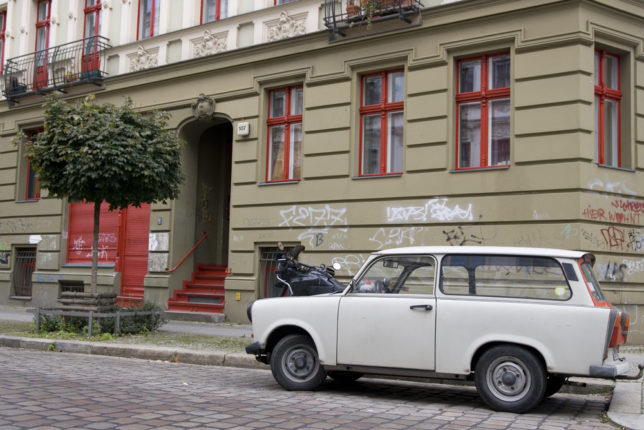 A Trabant in East Berlin. The East German Trabant "is the car that gave Communism a bad name. . . . Trabants smoked like an Iraqi oil fire, when they ran at all, and often lacked even the most basic of amenities, like brake lights or turn signals."--Time magazine. Credit: Marco Richter. License: Shutterstock.
by Ken Braun

Depending on one’s appetite for cynicism, greenwashing is either the mortal enemy or the duplicitous ally of the environmental, social, and corporate governance (ESG) movement. ESG was created by activists aiming to force corporations to adopt and invest in their left-leaning political objectives. The crusade has won a disturbing number of converts in corporate America, notably the gigantic investment firm BlackRock.

The Greenwashing Chronicles examines the woke corporations seeking ESG greenwashing, the advocacy nonprofits bathing them, and some of the reformers seeking to end the hypocrisy. Today’s feature is the RE100 initiative.

A Time magazine profile of the “50 Worst Cars of All Time” had this to say of the East German Trabant:

This is the car that gave Communism a bad name. Powered by a two-stroke pollution generator that maxed out at an ear-splitting 18 hp, the Trabant was a hollow lie of a car constructed of recycled worthlessness. . . . Trabants smoked like an Iraqi oil fire, when they ran at all, and often lacked even the most basic of amenities, like brake lights or turn signals.

The name of the RE100 initiative is shorthand for “100 percent renewable electricity.” But the “mission” statement on the program’s website provides this: “our mission is to accelerate change towards zero carbon grids at scale.”

Just as all Corvettes are cars, but not all cars are Corvettes, there is an important distinction between “zero carbon grids at scale” and doing the job with the “renewable energy” subspecies.

Driving quickly to “zero carbon” requires the energy equivalent of a Corvette. The RE100 folks want to get there with a Trabant, an option so unreliable it is unlikely to make the trip at all.

Titled “How RE100 Members Are Held to Account,” a March 2022 RE100 position paper pointedly states that nuclear-fueled electricity is a “technology not accepted” as a valid choice by RE100 participants hoping to hook up to “zero carbon grids.”

Nuclear power is the Corvette of zero-carbon electricity and the only “at scale” carbon-free energy available to a modern industrial economy. Nuclear reactors provided 9.9 percent of total world electricity in 2021, but even that is a deceptively low figure because it is a technology used most by richer nations. South Korea obtained 26.1 percent of its electricity from nuclear in 2021, the United States 18.7 percent, and France 69.1 percent.

On the other side, nuclear has a huge role to play in the places where energy demand is exploding. At least 4 billion people (more than half the world) live in just nine big developing nations where nuclear kicks in less than 5 percent of electricity consumption: China (4.8 percent nuclear), Mexico (3.6), India (2.5), Brazil (2.3), Nigeria, Bangladesh, Ethiopia, Egypt, and Indonesia (each with zero percent).

Other than a price that currently exceeds the dominant carbon-emitting “at scale” electricity sources, there is no practical limitation on how much nuclear power any nation could exploit. Everyone could have Corvettes!

Uranium, according to the U.S. Department of Energy, is “a common metal found in rocks all over the world.” A 2009 Scientific American analysis estimated that using fuel-recycling breeder reactors would leave us with a 30,000-year known supply at current consumption levels and another 60,000 years of uranium could be recovered from seawater.

RE100’s so-called “renewable” energy options are not scalable. Hydroelectric dams (15.3 percent of total world electricity consumption in 2021) and weather-dependent sources such as wind and solar (10.3 percent combined) have hard limitations on how much they can be used. Even in the sunniest spots it gets dark every day, most of the places where people live have unreliable wind, and we cannot build more mountains for the water to run off.

Even though these Trabants of power production are often sold as “environmentally friendly,” they are voracious consumers of the environment. A 2021 analysis by Bloomberg News estimated that solar needs 47 times more land to produce the same electricity as a nuclear power station and that the problem is far worse for wind (123 times) and hydroelectric (986 times).

RE100 is a joint project of the Carbon Disclosure Project (CDP) and the Climate Group. While the Climate Group’s position on nuclear energy is unclear, CDP has recently occupied a place of strident stupidity. In July 2022, as the Russian invasion of Ukraine was destabilizing the economies of every nation dependent on Russian oil and natural gas, the European Union sensibly voted to allow the inclusion of nuclear energy investments within its sustainable energy taxonomy.

CDP responded with a news release denouncing the vote as “an instrument for greenwashing.”

But rather than fair judges of greenwashing, the Climate Group and CDP are two of its expert practitioners.

There are 376 members of the RE100, and 70 have “Gold Member” status. The “Gold” group includes ESG heavyweights such as Unilever, Anheuser-Busch InBev, Google, and Microsoft. A 2021 membership booklet from the Climate Group prices the annual dues of RE100 gold membership at $15,000 (as opposed to the $3,500 for the base level).

If the Climate Group is receiving those payments from all 376 members, then that’s more than $1 million from the gold club and another million-plus from the rest. The greenwashing enticement value for joining isn’t hidden: “For our Gold level members, we are dedicated to celebrating your leadership stories.”

In opposing zero-carbon nuclear energy while promoting land-gobbling wind and solar, RE100 and its partners push the world to use up what cannot be replaced: habitat, landscapes, and real estate. There’s nothing “renewable” about the RE100 energy policy, but it does “deceive consumers into believing that a company’s products are environmentally friendly.”

That’s the definition of greenwashing. RE100’s gold members may be churning out “leadership stories,” of a sort, but not the sort that deserve celebrating.