New research pulls back curtain on the Buffett Foundation’s support for pro-abortion activism.

The Susan Thompson Buffett Foundation, funded by billionaire Warren Buffett, may be the least-known and most important supporter of pro-abortion activism in the world.

From 2000 to 2018, the Buffett Foundation poured $4 billion into groups that advocate for abortion on demand, with almost no attention from the media. That includes $675 million to Planned Parenthood and $441 million to Marie Stopes International, which provides abortions in developing countries, and $112 million to the Guttmacher Institute.

For more on the Arabella’s “dark money” network and its legion of fake “pop-up” groups, read my 2019 report Big Money in Dark Shadows.

Under IRS rules, foundations are required to publicly disclose to whom they make grants, though 501(c)(3) nonprofits such as Hopewell aren’t required to name their donors (only the donation amounts) in their annual Form 990 filings. This often obscures the money trail, making it nearly impossible for watchdog groups such as CRC to expose the funders behind an activist group.

The Hopewell Fund reported just two anonymous donors in its Form 990 for 2018 (available here: One donor gave $2.3 million, and the other nearly $29 million. In its Form 990, the Buffett Foundation reported donating $27 million in grants to Hopewell in 2018, making the foundation the largest Hopewell donor by far and certainly the source of the nearly $29 million Hopewell reported. (The difference of $2 million may have been gifted after the Buffett Foundation filed its Form 990.)

The description for each Buffett Foundation grant is the same: “project support,” likely referring to one of Hopewell’s nine known “pop-up” groups. But which one?

Obscuring which donor paid for which project is one strength of the Arabella “dark money” system. But given the Buffett Foundation’s history of deep-pocketed support for abortion on demand, one Hopewell pro-abortion group stands out as the likely recipient: Resources for Abortion Delivery (RAD).

Almost nothing concrete is known about RAD. Its one-page website gives a vague 73-word description of its mission: “protect and improve access to quality abortion care in the United States . . . by supporting the abortion care delivery system” against outside challenges and restrictive laws. 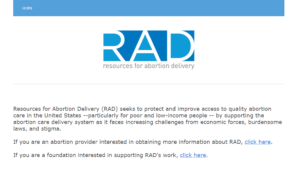 A $200,000 grant in 2017 from the Tara Health Foundation, an abortion funder, indicates that RAD advocates against “burdensome laws” and “stigmatizing” of abortion. A job listing from February of this year notes that the group has eight employees and “provides legal and regulatory compliance advice to abortion providers” and loans to “independent abortion providers.”

The group was created in 2016 and is run by Meagan Cavanaugh, the former national director of affiliate services for Planned Parenthood. Before that, she was a research manager for the Guttmacher Institute, Planned Parenthood’s think tank for pro-abortion research.

RAD co-manages the Abortion Law Project, a public database of abortion laws and regulations across the country, with the ACLU, National Abortion Federation, Planned Parenthood, and other aligned organizations.

Another Cog in the Pro-Abortion Network

While much of the group’s activities remain shrouded, what is known about Resources for Abortion Delivery reveals more about the Left’s massive network of overlapping abortion groups. Dozens of major funders are funneling money to hundreds of activists, lobby fronts, think tanks, pass-throughs, and support organizations—all with the same goal: tearing down pro-life laws and pushing far-left, up-to-birth abortion policies on a country that doesn’t support them.