Post-Janus, Unions Fight to Maintain Membership by Any Means Necessary 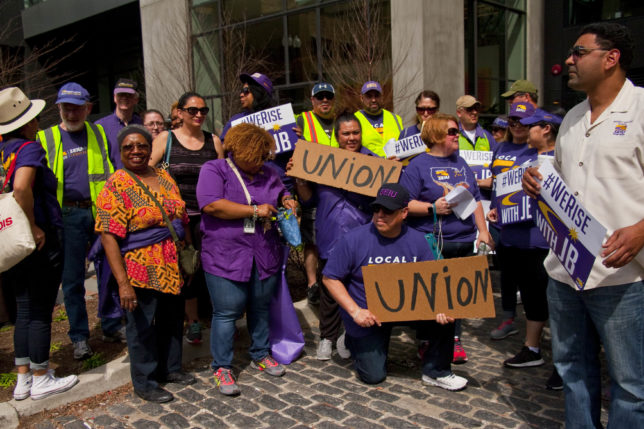 Ever since last year’s U.S. Supreme Court decision Janus v. AFSCME, which overturned the ability of government unions to demand non-union members pay union fees, several unions have seen a decline in their union membership—and their revenue. In the case of the Washington state union, the Washington Federation of State Employees (WFSE), state-agency union membership has declined nearly 20 percent.

In response, Washington state Democrats—whose campaigns raised $611,067 from public-sector unions in the 2018 elections—passed a staggeringly corrupt bill (HB 1575) that would undermine union workers’ rights by granting union leaders special privileges to collect dues, contradicting the Janus decision. Specifically, the bill will eliminate union legal liability for fraudulent union dues collection.  According to the Freedom Foundation’s Maxford Nelsen, the bill will:

Even though such actions would still be illegal in the state of Washington, employees would be denied legal standing to seek redress or restitution for any money taken from them illegally (even if a union employee or officer went to prison for committing such acts). In other words, unions in the state of Washington will be able to collect and hold on to union dues by any means necessary.

HB 1575 doesn’t stop there. It would also allow unions to pursue unorthodox and deceptive methods to authorize union dues collections from employees. Instead of laying out the complicated payroll terms associated with dues collection in writing, unions will have the ability to solicit dues collection authorization over the phone, but revoking dues authorization must be in writing under whatever terms the union chooses. The bill reads:

An employee’s request to revoke authorization for payroll deductions must be in writing and submitted by the employee to the exclusive bargaining representative in accordance with the terms and conditions of the authorization.

Why do unions demand lenient practices for coercing employees into paying union dues, but require such strict and inconvenient methods for cancelling them? Unions want to make it as easy as possible for people to pay into unions, but hard as possible for workers to stop paying into unions. This is why many government sector unions have irrevocability restrictions that only allow employees to cancel their dues within incredibly narrow time frames.

Earlier in January, the Oregon state legislature tried to establish a taxpayer slush fund that would’ve directly paid out unions as a means of compensating them for their loss in dues collections post-Janus. The Oregon House Bill 2643 would directly violate Oregon statutes that forbid public employers from using public funds to assist or deter union organizing—but that didn’t stop union-supported legislators from trying.

Unions and their allies will continue to push dues-collection bills like Washington’s and subsidy bills like Oregon’s to reverse their losses following the Supreme Court’s Janus decision.