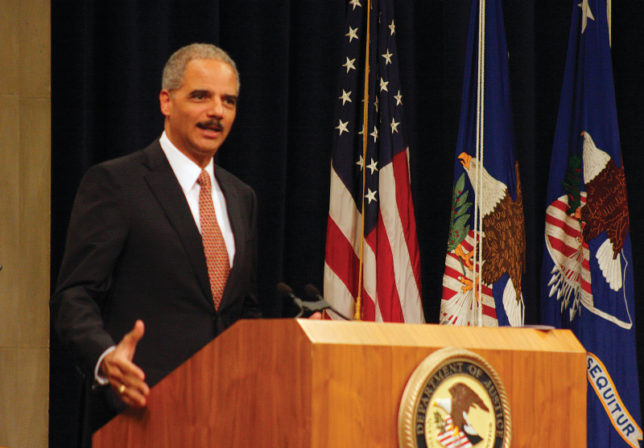 The litigation war to reshape America’s congressional districts to suit the Democrats is being coordinated by Eric Holder, President Barack Obama’s former attorney general and an overt partisan.

Holder is not the face of honest politics. In 2012, 17 Democrats joined the House Republican majority in holding the attorney general in contempt of Congress for refusing to turn over documents related to the Fast and Furious scandal, a law enforcement operation intended to dismantle Mexican drug cartels, which instead put some 2,000 guns into the criminals’ hands. Holder called the vote “politically motivated.”

During his tenure, conservative critics of the self-described “activist attorney general” charged him with politicizing the Justice Department by ignoring Democratic voter intimidation cases and hiring only committed leftists to the civil service.

Holder may be the ultimate Washington insider. He held a lucrative job at the mega-lobbying firm Covington & Burling from 2001 until he was sworn in as attorney general in February 2009. After leaving office in 2015, he immediately returned as a partner in the firm, which literally kept an empty office waiting for him, according to one report. Liberal Rolling Stone called him a “Wall Street Double Agent” for cashing in on the $2.5 million partnership immediately after leaving public service. And he’s still listed as a partner at Covington & Burling.

He has also launched a second career as the Democrats’ top gerrymandering litigator. Gerrymandering is drawing districts that unfairly favor one political party over another—for example, confining urban voters to a single district to ensure they vote for a Democrat and freeing up more districts for Republican-voting suburban and rural areas. It’s named for Elbridge Gerry, vice president under President James Madison, who as a Massachusetts legislator famously drew long, snakelike congressional districts that one political cartoonist likened to a salamander—hence “gerrymander.”

In 2017, Holder launched the National Democratic Redistricting Committee (NDRC) with the declaration that Republicans’ “extreme partisan gerrymandering” in states they controlled left Congress “broken.” That Democrats have gerrymandered states they controlled was conveniently overlooked. “This creates a Congress driven by primary party politics and ideological extremism,” he wrote, “not one accountable to the will of the majority of voters.”

Yet accountability has little to do with it. NDRC’s goal is to elect Democrats to legislatures in battleground states in time for the 2021 redistricting process, gerrymandering them into oblivion, and ensuring his party’s dominance for the next decade. It even calls itself the Democrats’ “strategic hub for a comprehensive redistricting strategy.” Its stated goal in the organizational forms filed with the IRS is: “To build a comprehensive plan to favorably position Democrats for the redistricting process through 2022.”

The NDRC has set its sights on 12 states where Republicans either have a strong legislative majority (Texas) or face tough competition from Democrats (North Carolina) in 2020. It’s particularly interested in breaking trifectas—states where Republicans control both houses of the legislature and the governorship—guaranteeing Democrats a stronger place in the redistricting process.

NDRC is supported by former President Obama, whose presidential campaign-turned-activist group, Organizing for Action (formerly “Obama for America”), merged with the NDRC in 2019—gifting it the formidable list of donors, supporters, and volunteers built by the Obama campaigns over more than a decade. Now dubbed “All on the Line” and under the NDRC’s leadership, the combined groups have targeted 10 states with lawsuits to influence redistricting to favor the Left in what Obama called an “opportunity to bend the great arc of history toward justice.”

The NDRC is composed of three groups, each chaired by Holder: the NDRC PAC, which supports Democrats running for Congress; the National Redistricting Action Fund, a 501(c)(4) that lobbies for state ballot measures supporting redistricting “reforms”; and the National Redistricting Foundation, a 501(c)(3) that litigates against Republican-drawn maps. (These kinds of networks are common, since each organization takes advantage of the peculiar laws governing 501(c)(3) and 501(c)(4) groups and PACs to advance a single cause.)

In 2018, the NDRC PAC raised $3 million and spent $2.7 million helping Democrats and attacking Republicans. North Carolina was its favorite target state: The PAC donated $500,000 to the state Democratic Party and $5,200 to Judge Anita Earls’s successful campaign for the state Supreme Court (seat 5). It’s raised nearly $4 million for the 2020 cycle (as of August). The PAC is run by Elisabeth Pearson, former director of the Democratic Governors Association and Democratic Senatorial Campaign Committee (DSCC), the party’s main PACs for gubernatorial and U.S. Senate races.

The action fund manages the All on the Line campaign, focusing on turning out Democratic-leaning constituencies in the 2020 Census. In August 2019, it launched Redistricting U with fanfare from Obama, who wrote in a fundraising email that “there’s no one-size-fits-all solution to map manipulation.”

Redistricting U was formed to “train volunteers, give them the tools to impact the redistricting process in their state, hear from them on how to best make change in their communities, and empower them to be leaders in the movement for fair maps.” According to the group, North Carolina is a “key target.”