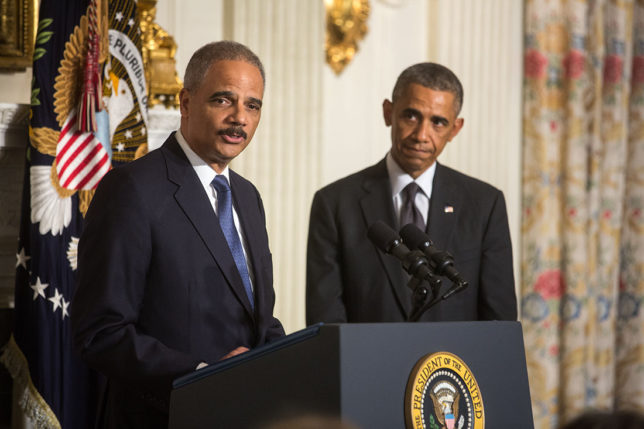 Attorney General Eric H. Holder Jr., and President Obama. Now out of office, both men are focusing on redistricting through NDRC.
by Hayden Ludwig

The Redistricting Process in North Carolina

The redistricting process—when every state redraws its congressional and legislative maps—will start in early 2021, when the Census Bureau releases its data to the states. Just how North Carolina will draw its 13 congressional districts (14 if it gains one in the census) and 170 legislative districts will be determined by whichever party controls the state legislature after the 2020 election. (Unlike some states, North Carolina’s governor can’t veto the legislature’s maps and so plays a much smaller role.)

Redistricting has some basic rules. According to state law, districts must be contiguous, should attempt to adhere to county lines, and should take into consideration “communities of interest.” However, the 2020 process differs the 2010 process in one critical way: North Carolina no longer needs to obtain federal “preclearance” to put its plans in place.

To keep states from infringing on Americans’ voting rights (particularly the rights of blacks in the South), Section 5 of the 1965 Voting Rights Act required certain states to preclear their redistricting plans with the U.S. Department of Justice to ensure they do not discriminate against minorities. In North Carolina, 40 of 100 counties were such “covered jurisdictions.” Section 5 was always meant to be temporary—hence, the provision required congressional reauthorization every five years—but it had effectively become a permanent condition for most Southern states.

That changed in 2013, when the U.S. Supreme Court ruled 5-4 against Attorney General Eric Holder in Shelby County v. Holder that conditions had changed in Shelby County, Alabama, such that Section 5 no longer applied. In a nutshell, the racial discrimination of the 1960s was simply no longer true 50 years later. Chief Justice John Roberts wrote in his opinion:

If Congress had started from scratch in 2006, it plainly could not have enacted the present coverage formula. It would have been irrational for Congress to distinguish between States in such a fundamental way [as the Voting Rights Act did] based on 40-year-old data, when today’s statistics tell an entirely different story. And it would have been irrational to base coverage on the use of voting tests 40 years ago, when such tests have been illegal since that time. But that is exactly what Congress has done [emphasis added].

Yet while conservatives celebrated the decision, liberals were aghast. The Brennan Center for Justice wrote that Shelby County “opened the floodgates to laws restricting voting throughout the United States.” The New York Times characterized the decision as the culmination of a 50-year effort by Republicans “to undercut or dismantle [the] most important requirements” of the Voting Rights Act. The Atlantic didn’t hold back in a piece entitled, “How Shelby County v. Holder Broke America,” charging the Supreme Court with “set[ting] the stage for a new era of white hegemony.”

In reality, the Shelby County decision enabled states like North Carolina to implement voting integrity laws that likely otherwise would not have gotten past Attorney General Eric Holder’s rigidly left-wing Justice Department, including voter ID requirements and purging rolls of voters who hadn’t voted in six consecutive years and failed to confirm their residency.

A good rule of thumb with left-wing advocacy groups is that their goal is usually the opposite of their name. Case in point: Fair Districts NC, a “nonpartisan” redistricting group that is actually a front for the liberal League of Women Voters’ North Carolina branch—itself a nominally centrist group that strongly supports government-run health care, handgun bans, and other left-wing policies. Fair Districts NC is part of a nationwide network of similarly named groups, all of which are fronts for the League of Women Voters. In Pennsylvania and other states it’s co-administered by the redistricting litigation group Common Cause.

Fair Districts lobbies for the creation of California-style independent redistricting commissions, but in keeping with this Devil’s Dictionary nothing about such commissions is “independent.” Far from being “transparent,” taking the redistricting power from the state legislature and giving it to an appointed committee of individuals who aren’t accountable to voters would all but guaranteed genuine gerrymandering .

There’s nothing “fair” about it. As CRC’s Michael Watson has documented, similar redistricting commissions in California, Washington, Idaho, and Arizona have resulted in election outcomes that disproportionately favor one party over another—granting California Democrats, for instance, as many as 10 extra seats relative to their party’s statewide proportion.

In the next installment of “Plans to Flip North Carolina,” learn about Holder’s war to gerrymander the states.