Technology, not treaties, is leading the environmental debate 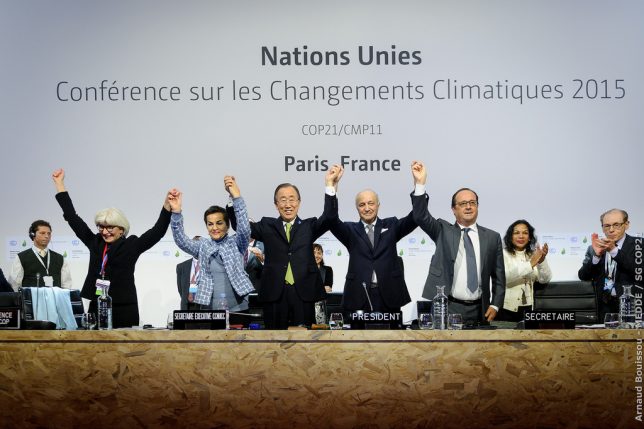 Paris Climate Accord. Image via Flickr, goo.gl/GgFsnA
by Hayden Ludwig

Despite the best efforts of environmentalists to asphyxiate the fossil fuel industry, the United States has unexpectedly emerged as the world’s leading energy producer—and we owe it to old-fashioned American innovation.

Cheaper energy has brought the U.S. greater security in the international arena, reduced U.S. reliance on oil-rich tyrannies, and made the average consumer wealthier. And ironically, this new status as natural gas- and petroleum-producer has also made the country more environmentally sensitive.

Hydraulic fracturing, or “fracing” in industry jargon, has drastically lowered annual carbon emissions by about 12 percent over the last decade. That’s a faster rate than the “environmentally conscious European Union” has achieved with draconian regulations, notes Victor Davis Hanson writing for National Review. Even with severe limits on where companies can frac and drill, private industry has ramped up oil production while minimizing America’s carbon footprint. That’s a feat unmatched by the EU’s anti-energy policies, and it should serve as a lesson against taking policy cues from Europe.

When President George W. Bush withdrew the U.S. in 2001 from the Kyoto climate protocol signed by his predecessor he was assailed in the media for his pigheaded “isolationism” in turning the United States into a “rogue state.” These apocalyptic predictions, however, turned out to be so much bunk. According to a report by the American Enterprise Institute, in the years following the Kyoto retreat, U.S. energy prices were half those of the EU, where carbon emissions actually increased due to the large-scale abandonment of nuclear energy. And in an ironic twist sure to reduce many Eurocrats to fits, the United States still became the first industrial state to meet the Kyoto Protocol emissions targets in 2012, thanks to vast increases in natural gas output.

The same can’t be said for Europe. New research shows that Germany – once hailed as “the green man of Europe” – is expected to miss its 40 percent emissions reduction goal by 2035—even after Germans have spent an extra 300 euros per person, per year in additional power bill costs.

President Trump would do well to continue to encourage domestic energy growth, which has thus far yielded dividends to the average consumer.

Advances in fracing have streamlined costs and increased output dramatically. From 2014 to 2016, gas prices dropped by some $1.50 per gallon – amounting to more than $1,000 average annual savings for consumers. Americans today pay a national average of $2.26 per gallon of gas, according to the American Automobile Association’s price tracker. That figure contrasts starkly with the peak just five years ago, when gas prices in some areas neared $4 per gallon. Lower fuel costs put money in the pockets of working men and women, drive down the cost of food, and encourage governments to build and maintain more roads with less expense. More accessible energy is the foundation of our national economic prosperity.

Of course, the price per gallon American’s paid at the pump was never high enough for certain environmental ideologues in the Obama administration who dreamed of European gas prices exceeding $10 per gallon. Sky-high costs, they hoped, would force beleaguered companies to invest more in alternative energy sources, eventually leading to the elimination of fossil fuels altogether. Their schemes fell flat.

Who would have thought that American oilmen would build the “green” economy the cosmopolitan Europhiles in Manhattan and San Francisco can only dream about?