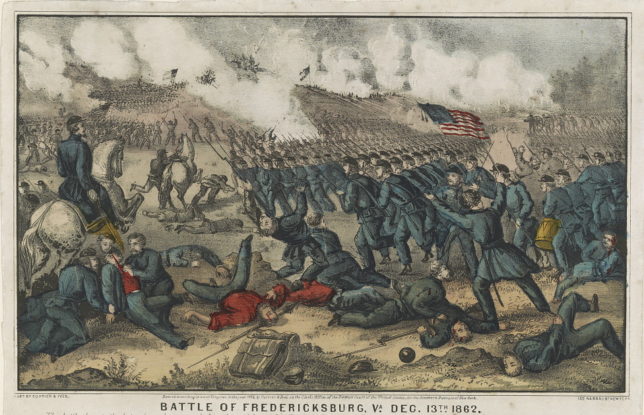 None denied the courage of the men of the 63rd, 69th, and 88th New York; the 28th Massachusetts; and the 116th Pennsylvania, but the folly of Union commander Ambrose Burnside’s assault on the Confederates near Fredericksburg doomed them in spite of it. Credit: Currier & Ives. License: Public domain.
by Michael Watson

Summary: The most important fact about woke cancellation is that it rarely if ever arises from individual action. Organized institutions carry out the famous firings and relegations. “Internal mobs,” sometimes aided and abetted by the labor unions, enforce the ideological line. Teachers unions, school administrators, major corporations, and liberal and mainline religious denominations have all supported, instituted, or advanced woke ideology. The woke faction enjoys three classes of institutional advantages: Most major institutions have chosen or conceded to pressure to make critical race theory (CRT) and similar ideologies part of their standard operating procedures and employee indoctrination. Institutional ideological progressivism employs aggressive tactics like secondary boycotts to coerce institutions to adopt its viewpoints. Finally, when liberals control government institutions, they exploit the letter of expansive legal precedents to coerce even the unwilling to follow the left-progressive line.

Just after noon two weeks before Christmas 1862, Brigadier General Thomas Francis Meagher gave the order to his men: “Shoulder arms, right face, forward, double quick, march.” With that command, the Irish Brigade of the Army of the Potomac followed its comrades into the doomed assault on the well-entrenched Confederates atop Marye’s Heights outside Fredericksburg, Virginia. Almost half would not return. None denied the courage of the men of the 63rd, 69th, and 88th New York; the 28th Massachusetts; and the 116th Pennsylvania, but the folly of Union commander Ambrose Burnside’s assault doomed them in spite of it.

With that consequence of doomed courage in mind, one reads the admonitions from a certain sort of classical liberal, prominently including Bari Weiss, late of the New York Times; David French, the free-speech litigator turned pundit for Jonah Goldberg’s the Dispatch; and Ayaan Hirsi Ali, the Somali-born former member of the Dutch Parliament driven to exile in the United States by jihadist death threats. All have shown courage in their own lives and careers, and they exhort the masses to the same courage in the face of the cancel mob and woke activism.

But these prominent public intellectuals, much like the Irish Brigade’s heroic commander Meagher (a veteran of Irish insurrections against English rule, escapee from the prison colony of Australia, and unit commander in the brigade’s previous battles of 1862), leave the troops they order into battle unprotected against the aimed musketry of a well-organized foe.

It will take more than personal courage to overcome the strong advantages that woke-progressivism and the cancel mob enjoy in the institutions subject to O’Sullivan’s Law that “all organizations that are not actually right-wing will over time become left-wing.”

The institutional advantages that the woke faction enjoy are of three classes, each raising the cost of individual acts of courage like the Confederate emplacements on Marye’s Heights. First, higher education, K-12 education, major corporations, institutional nonprofit groups and liberal foundations, “mainline” and theologically liberal religious groups, and even the military have all chosen or conceded to pressure to make critical race theory (CRT) and similar ideologies part of their standard operating procedures and employee indoctrination, usually under the title “diversity, equity, and inclusion” or DEI.

Second, institutional ideological progressivism, which outspends institutional conservatism by approximately four to one, employs aggressive tactics like secondary boycotts to coerce institutions to adopt its viewpoints as the path of least resistance. Finally, when liberals control government institutions, they exploit the letter of expansive legal precedents to coerce even the unwilling to follow the left-progressive line.

Overcoming the institutional positions of the woke-progressive Left will require courage worthy of the Fighting 69th. But before charging the heights, one must know the adversary’s true strengths and deployments if one intends to take the hill.

The most important fact about woke cancellation is that it rarely if ever arises from individual action. Organized institutions carry out the famous firings and relegations. “Internal mobs,” sometimes aided and abetted by the labor unions supposedly intended to protect workers from arbitrary firing, enforce the ideological line. Institutions that have not purged dissenters have decided that it is easier to appease the internal, external, and governmental mobs by adopting “diversity, equity, and inclusion” (DEI) programming aligned with expansive critical race theory. Teachers unions, school administrators, major corporations, and liberal and mainline religious denominations have all supported, instituted, or advanced woke ideology.

Education. Critical race theory itself emerged from the academy. The originator of the ideologically charged methodology was Columbia Law School Professor Kimberlé Crenshaw, who derived the approach from “neo-Marxism, postmodernism, liberal integrationism, radical feminism, leftist Black nationalism and the like” in the early 1990s.

Within education schools, the training arena for schoolteachers, the rise of critical race theory built on top of longstanding left-progressive and radical-left pedagogy. Pedagogy is the theory of teaching practice. One of the most assigned texts is Pedagogy of the Oppressed, written by the late Brazilian academic and socialist politician Paulo Freire. In the Manhattan Institute’s City Journal, Sol Stern described Freire’s influence:

Of course, the popularity of Pedagogy of the Oppressed wasn’t due to its educational theory alone. During the seventies, veterans of the student-protest and antiwar movements put down their placards and began their “long march through the institutions,” earning Ph.D.s and joining humanities departments. Once in the academy, the leftists couldn’t resist incorporating their radical politics (whether Marxist, feminist, or racialist) into their teaching. Celebrating Freire as a major thinker gave them a powerful way to do so. His declaration in Pedagogy of the Oppressed that there was “no such thing as a neutral education” became a mantra for leftist professors, who could use it to justify proselytizing for America-hating causes in the college classroom.

Daniel Buck, a conservative writer and schoolteacher in Wisconsin, explains how Freire’s and Crenshaw’s leftist theories manifest in classroom structure and instruction:

Few, if any, public schools are teaching scholars like Crenshaw, [critical race theorist Richard] Delgado, or Freire in K-12 curricula. But the ideology’s core concepts are an influential force in public education and underlie the design of course material from inception to evaluation. To claim otherwise is like saying a dinner includes no salt because there isn’t a salt course. CRT can influence every decision within schools—curricula, behavior policies, instructional practices, and the like—even if high school students don’t read lengthy monographs of legal theory.

Given that critical race theory and the broader “pedagogy of the oppressed” movement aligns comfortably with the interests and ideologies of the socialist Left, it should not be surprising that the teachers unions back the ideology. In 2018, the National Education Association (NEA) issued a “racial justice in education” guidebook inspired by critical race theory. It managed to avoid hostile notice until the Freedom Foundation unearthed and publicized it in 2021.

As pushback against critical race theory in education grew in 2021, both the NEA and its major-city counterpart, Randi Weingarten’s American Federation of Teachers (AFT), doubled down on pushing critical race theory and aligned ideologies. At its 2021 convention, the NEA adopted a resolution to:

For its part, Weingarten’s AFT brought the academic theorist Ibram X. Kendi to speak at its TEACH 2021 Conference. Kendi has proposed changing the Constitution to force all policies to conform to his radical-left notions of racial “equity.”

Unsurprisingly, higher education is worse. Packed full of education-program graduates steeped in Freire’s Pedagogy of the Oppressed and academic critical theories including critical race theory, university administrations provide the shock troops of campus cancel culture. Even given the leftism of university professors and students, administrators are the most progressive. And the administrators handle matters such as hiring for on-campus jobs, adjudicating academic disputes, and administering campus social programming.

Research suggests that liberal administrators outnumber conservative-leaning administrators by 12 to one. The relative ratio for professors is six to one, and for incoming students it is two to one. A right-leaning professor characterized the situation: “It appears that a fairly liberal student body is being taught by a very liberal professoriate—and socialized by an incredibly liberal group of administrators.”

In the next installment, review the institutions of society that wokeism has captured.