One Teacher’s Fight Against CRT: Key Tenets of CRT 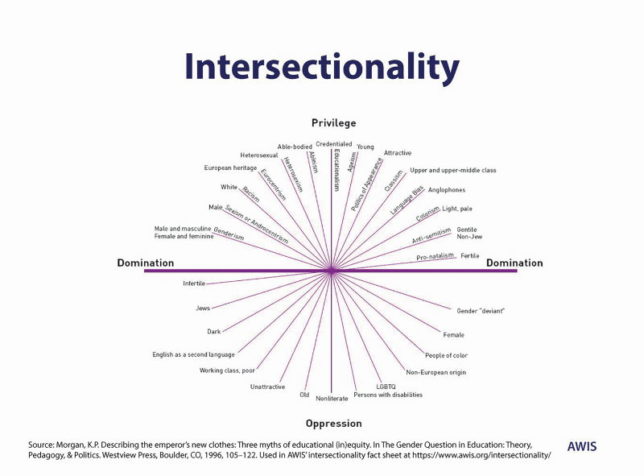 Students learned about the concept of intersectionality, a fancy word for “counting your oppressions.” Intersectionality is “the interconnected nature of social categorizations such as race, class, and gender as they apply to a given individual or group, regarded as creating overlapping and interdependent systems of discrimination or disadvantage.” Credit: Rancho San Juan High School, Ethnic Studies, 2020.
by Kali Fontanilla

I mentioned earlier the key tenets of CRT being taught to the 9th grade students in my district but let’s examine them a little more closely.

They learned about the concept of intersectionality, a fancy word for “counting your oppressions.” Intersectionality is “the interconnected nature of social categorizations such as race, class, and gender as they apply to a given individual or group, regarded as creating overlapping and interdependent systems of discrimination or disadvantage.” The students were asked to write down or analyze their various forms of oppression or lack thereof based on their race, sex, sexual orientation, religion, etc. They were shown charts that ranked every trait as either in a place of “power and privilege” or in a place of “oppression and discrimination.” Heterosexual, white male Christians were shown as receiving no oppression and always in a place of domination or power. How ironic, as it’s hard to think of any other group with a government-funded forced curriculum demonizing them more to children than white men. But a black, lesbian female has multiple oppressions and is always heavily marginalized. Students were asked to reflect on their intersectionality and bask in their various forms of oppression. Too bad if they are white males in the class, they are left out of the oppression Olympics; they don’t even qualify.

Another core tenet of CRT the students were taught about was hegemony, the domination by one country or group over others. They were taught that all systems in America were built to benefit the white male and oppress people of color. Of course, the history of various Native American tribes oppressing each other, like the Aztecs, is conveniently left out. This lesson on hegemony was when Marxist concepts were introduced. Yes, you heard that right, Karl Marx for 9th graders. They were given a presentation on “Marxist Philosophy” and introduced to a “two-class society” and “the ruling class.” This included learning about the oppressive “dominant ideologies” of the ruling class, like capitalism, family, the patriarchy, the gender binary, and marriage. Yep, marriage is labeled as an oppressive dominant ideology of the “ruling class.”

Does this sound like a fun class to you? It is no wonder so many of my traditional Mexican students were failing this course! These kids don’t want this garbage.

Then came the “4 I’s of Oppression,” where students were taught about four different ways they could be oppressed. Again, heterosexual white males are left out of this one, too. In fact, when you see the words “dominant group,” it refers to them. 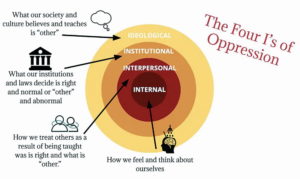 And let’s not forget the privilege quiz. On Day 5 of their lessons, the students in the Ethnic Studies class were given a quiz of 14 questions to rank their privilege against their other classmates. Afterward, they were asked these reflection questions:

How has your identity impacted you? What are some privileges and disadvantages you have because of your identity?

Imagine having 14 loaded questions be what determines if you are privileged or not against your own classmates!

English is your first language

Either one of your parents graduated from college

You have visible or invisible disabilities

You were encouraged to attend college by your parents and family

Your family has health insurance

Your religious holidays are celebrated in this country

You have been bullied or made fun of based on something you cannot change (gender, ethnicity, age, sexual orientation, etc.)

You are a citizen of the United States

There are more than 50 books in your house

You have felt unsafe walking alone at night

You have felt uncomfortable about a joke or statement you overheard related to your race, ethnicity, gender, appearance, or sexual orientation but felt unsafe to confront the situation

This class also included a lesson on “Graffiti as Resistance,” teaching students that graffiti can often be “protest art” and should be normalized. They were shown examples of various graffiti art on the boarded-up stores whose windows were busted out during the George Floyd protests. The assignment that went with the lesson was to create their own art as a protest piece. Did you think ethnic studies would include a pro-graffiti lesson? 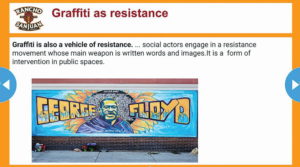 There has been an effort to hide the fact that critical race theory is being taught to our students in K–12 schools. These woke teachers have found ways to teach the theory without saying the actual words shown in the many examples from the lessons I saw in my district. But the lessons I saw were introduced in early 2020, right before the media covered the theory. The 9th grade students in my district were taught critical race theory explicitly. They were taught the definition, told of its importance, and asked to analyze school policy through the CRT framework. There was even a KQED article where our social studies curriculum specialist admitted that CRT is included in the lessons in an interview. Most of the mainstream media and the teachers unions lied about CRT in our schools, but I have the smoking gun.

Even if critical race theory isn’t explicitly taught in your city or state like it was in my district (16 states have banned the theory from the classroom) the essential ideas and concepts of the theory are still there. In fact, 5,000 teachers vowed to continue to teach critical race theory in their states where it is banned. The National Teachers Association and the American Federation of Teachers have given them their support. “The backlash [to teaching about race] that you see in these radicalized circles is going to hurt kids,” said American Federation of Teachers President Randi Weingarten in an interview. “I felt the need to make it crystal clear to teachers . . . that I honor their professional responsibilities and that their union will have their back.” Not only are they waving the banner of support for teachers that want to include CRT pedagogy in their classroom, but they are also introducing measures to include CRT in the fight to eradicate institutional racism. One measure will support and lead campaigns that “result in increasing the implementation of culturally responsive education, critical race theory, and ethnic . . . studies curriculum in pre-K–12 and higher education.” First, they deny that CRT is in our schools and then spend over a half million dollars on measures that ensure it will be in the K–12 classroom.

In the next installment, CRT should be judged by its fruit.