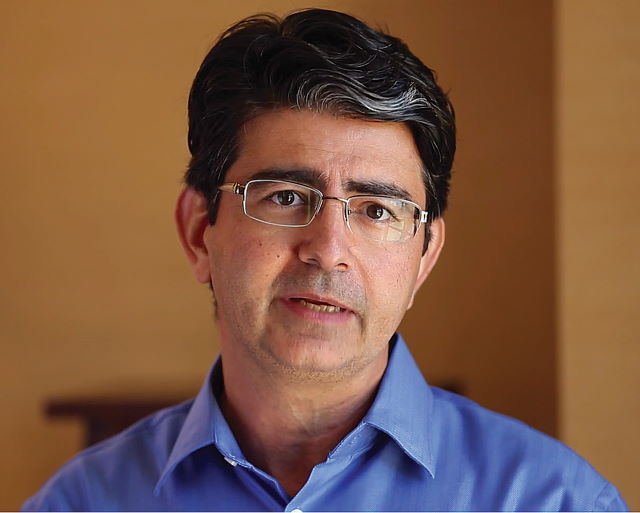 Most people have probably never heard of Pierre Omidyar, but they certainly know his masterwork: eBay, one of the greatest success stories of the dot-com era. Credit: eBay Newsroom. License: https://bit.ly/3y4bF76.
by Hayden Ludwig

Summary: Pierre Omidyar is hardly a household name, but he fits the typical mold of left-wing billionaire. He’s a tech mogul turned philanthropist, whose “charity” flows to hundreds of groups involved in reshaping America’s elections, tilting the 2020 Census, and corrupting the capitalist system that generated his enormous wealth. Yet Omidyar has largely escaped conservative scrutiny, flying under the radar for decades—until now.

History might remember the past decade as the age of the Big Tech plutocrats. Like the so-called robber barons of the late 19th century, they command vast fortunes and influence matched only by their egos, carrying themselves like gods among men. For the most part, Americans have responded accordingly. Practically everyone uses Netflix, LinkedIn, Twitter, or Facebook, but how many people would hold up Mark Zuckerberg or Jack Dorsey as role models for their kids?

Enter Pierre Omidyar. Most people have probably never heard of this Bay Area billionaire, but they certainly know his masterwork: eBay, one of the greatest success stories of the dot-com era and a multinational titan that helped create e-commerce, today an industry worth over $9 trillion.

From Tech Billionaire to Mega-Donor

He isn’t known as a major donor to the Democratic Party, giving just $241,000 to various committees between 1999 and 2010, even as his net worth rose from nil to $5.5 billion over that period (today it’s $21 billion). Omidyar’s true political is his massive support for the professional Left, which he disguises as “charity.”

Between 2004 and 2020, Omidyar’s grantmaking groups paid out a whopping $1.2 billion, most of it to other left-wing groups since 2014. And those are just the nonprofits. The Omidyar Group is an umbrella LLC controlling multiple other investment and holding companies whose exact size is unknown. We call this collection of nonprofits and for-profits the Omidyar Nexus, a quiet but potent player on the nation’s political battlefield.

At the heart of this nexus, of course, is Omidyar himself. Born in 1967 as Parviz Morad Omidyar to Iranian immigrants living in Paris, his family immigrated to Maryland in 1973 for his father’s residency at Johns Hopkins Hospital in Baltimore. After graduating from the University of California, Berkeley, in 1988 with a degree in computer science—the department was only established at Cal in 1968—Omidyar entered a Silicon Valley then in full swing. He initially went to work for Claris (for a time called FileMaker), a software developer formed the year before as a subsidiary of Apple, developing the MacDraw II vector graphic drawing program mostly used for creating technical diagrams.

In 1991, Omidyar co-founded Ink Development Corporation (later eShop) in San Mateo, which developed products for the early graphical tablet and PDA operating system PenPoint. Although the operating system was short-lived, the company flourished and was eventually sold in 1996 to Microsoft for nearly $50 million, netting Omidyar $1 million from the sale.

But his most lasting achievement, eBay, was already in the works. The project actually started as Omidyar’s personal website, but in September 1995 it launched “Auction Web,” offering users the internet’s first person-to-person trading service. Famously, among the first items traded was a broken laser pointer sold for $14.83 to a self-proclaimed “collector of broken laser pointers.”

By 1997, the website had hosted 2 million auctions and brought in close to $7 million from a venture capital firm. Auction Web soon became eBay, a reference to Echo Bay in Lake Mead, Nevada, near Las Vegas. A year later the company launched its initial public offering at $18 per share, closing 163 percent up and garnering $63 million in investment capital, one of the rare bright spots amid the market turmoil of the late 1990s. Omidyar became a billionaire overnight.

Interestingly, the company’s first president was Jeffrey Skoll, who cashed out his eBay shares worth $2 billion shortly after it went public. Skoll has since become one of the Left’s quiet mega-donors (estimated net worth: $5.5 billion), using the fruits of free enterprise to sell an anti-capitalist environmental agenda via his film production studio, Participant, which has produced such documentaries as Al Gore’s An Inconvenient Truth.

Skoll was succeeded by celebrated business executive Meg Whitman, who in 2010 blew a record-breaking $140 million of her own money in a failed bid for California governor. She served as eBay’s CEO from March 1998, six months before the company went public, through 2008. During her tenure the company grew from 30 employees and $4 million in annual revenues to 15,000 employees and $8 billion in annual revenues.

Omidyar isn’t known as an outspoken leftist akin to Tom Steyer, Mark Zuckerberg, or George Soros. However, the Trump years certainly brought out his political views, with Omidyar furiously tweeting and telling reporters variously: “I think Trumpism is dangerous,” “endorsing Donald Trump immediately disqualifies you from any position of public trust,” and the President Donald Trump “is trying to destroy our democracy! Trump wouldn’t be in [the White House] without social media!” Not surprisingly, in the 2016 election Omidyar donated $450,000—the biggest sum he’s contributed to any federal race—to two anti-Trump PACs.

In July 2016 he signed an open letter from technology-sector entrepreneurs accusing then-presidential candidate Trump of campaigning “on anger, bigotry, fear of new ideas and new people, and a fundamental belief that America is weak and in decline. . . . Trump would be a disaster for innovation. . . . Diversity is our strength.”