Of Border Walls and Dreamers: Allegations Leading to Impasse 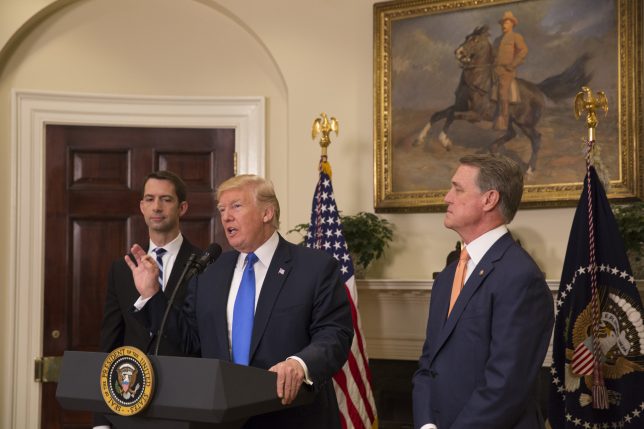 The debate over immigration policy is notoriously divisive. In part, that is because all three major factions are accused by their rivals of holding the positions they hold in the interest of a nefarious purpose. The Left accuses restrictionists of racism while the business community accuses them of ignorance. Business advocates are accused by restrictionists of an animus against American workers. Meanwhile, the Left all too willingly admits that it sees expanded immigration and citizenship for the presently illegal alien population as paths to electoral success.

The restrictionist side faces nearly constant attacks from the left-wing that it is motivated principally by ethnic hatred. Taken to an extreme, these allegations can become farcically absurd. To choose one example, the Latino Victory Project, a left-wing political action committee funded by Democratic political committees and liberal mega-donors, attacked U.S. Senator Marco Rubio (R-Florida) and New Mexico Gov. Susana Martinez (R) for campaigning for Republican candidates in the 2017 Virginia state elections, claiming they “contribute to the Latino community’s oppression.” (Martinez is Mexican-American, and Rubio is Cuban-American; both are considered moderates in the Republican Party on immigration matters.) Republican candidates in those elections had emphasized the need to counter the threat of MS-13, a transnational organized criminal gang based in El Salvador, by increasing immigration enforcement and policing.

However, not all the allegations of ethnic-interest motivations are insane. John Tanton, the environmentalist activist who co-founded the immigration restrictionist group FAIR, asserted in a 1993 letter: “I’ve come to the point of view that for European-American society and culture to persist requires a European-American majority, and a clear one at that.” These and similar sentiments saw Tanton criticized by the Center for Immigration Studies he had helped found, though he served on FAIR’s board until 2011. Impolitic statements about immigrants’ countries of origin by leading restrictionist politicians also help contribute to these suspicions.

Business community organs tend to tread more carefully in imputing bad faith to restrictionists; they prefer to allege mere ignorance or error. The effect of immigration on wages and employment, especially low-skill immigration’s effects on wages at the low end of the income distribution, is hotly contested: Business groups embrace findings that support a null effect. Others, such as George Borjas, the Robert W. Scrivner Professor of Economics and Social Policy at the Harvard Kennedy School, produce research that shows immigration is lowering wages for native-born laborers.

Allegations Against the Business Community

Restrictionists, who emphasize the negative effects of immigration on wages or native employment, suspect the business community supports liberal immigration policies in order to reduce their own labor costs.

Agricultural groups, which support permissive guest-worker authorizations, have written in fear of labor shortages. One particularly impolitic report, by the business- and municipal-government-backed Partnership for a New American Economy, stated that “Farmers […] faced a hard time finding sufficient numbers of laborers and have had to bid up wages to attract and retain workers.” The implication of the report was stark: Agricultural employers seek to increase the number of guest workers because farm labor was not a job that Americans would perform for the offered wage.

Evident in prepared policy reports, this attitude can also be seen in the funding that passes from some businesspeople to pro-liberal expansionist groups. The National Immigration Forum, a liberal expansionist single-issue immigration group, has received multiple six-figure grants from Vista Hermosa, a Washington state-based foundation that is funded by Broetje Orchards and is controlled by the Broetje family. Broetje Orchards made news in 2015 for paying a then-state-record $2.25 million in civil penalties to Immigration and Customs Enforcement (ICE) for failing to properly verify whether its workers were legally authorized to work in the United States. Even as it settled the dispute with ICE, Broetje Orchards issued a preachy pro-immigration statement reading in part “…this case nevertheless highlights what is clearly a dysfunctional and broken immigration system…. The agricultural labor shortage needs to be fixed, and now.”

Allegations Against the Left

Left-wing pro-liberalization groups are widely suspected of using their supposed moral crusade on behalf of low-income immigrants to cloak a cynical electoral calculus. Liberals have put their faith in a theory about the electoral future that posits a “Rising American Electorate” that will bring forth an “emerging Democratic majority.”

The “Rising American Electorate” is said to consist of single women, Millennials, and ethnic and racial minorities—all growing, left-leaning blocs of voters. Ruy Teixeira, now a senior fellow at the Clinton family- and Democratic Party-aligned think tank Center for American Progress, and John Judis, a journalist and editor-at-large for the liberal blog Talking Points Memo, wrote a book in 2004 titled The Emerging Democratic Majority which posited that Democrats could create a realignment by using Clinton-style policies of “progressive centrism” and waiting on demographic change to build up the numbers of the “Rising American Electorate.”

As Real Clear Politics statistical elections analyst Sean Trende has observed, this last element of the theory (determinist demographic change) dominated the thesis’s prescription of a liberal centrist politics. Judis would repudiate the theory after the 2014 elections on the grounds that “progressive centrism” had been abandoned. Yet as Trende noted after the 2016 elections, in a piece amusingly titled “The God That Failed,” the Emerging Democratic Majority hypothesis was handed a harsh rebuke by the election of President Donald Trump and Republicans to majorities in both Houses of Congress.

Since the “Emerging Democratic Majority” has not emerged quickly enough for their liking, Democratic and liberal operatives have expressed a desire to expedite demographic change through manipulating immigration policy. In a memo prepared for the 501(c)(4) arm of the Center for American Progress, former Hillary Clinton campaign flack Jennifer Palmieri dryly assessed that “The fight to protect Dreamers is not only a moral imperative, it is also a critical component of the Democratic Party’s future electoral success.” (Interestingly, Palmieri estimated the number of “Dreamers and their families” as “millions,” substantially greater than the number of recipients of DACA, who are usually estimated around 800,000, or those eligible for but not part of DACA, who number less than two million.) The memo proposed a government shutdown strategy—“Democrats should refuse to offer any votes for spending bills that do not protect Dreamers”—based on the cynical expectation that Hispanic voters would reward Democrats electorally. Latinos have supposedly done this in California after Republicans passed a measure, later struck down, that was intended to bar illegal immigrants from receiving public benefits.

The myth of a California transformed by immigrants—as seen in Palmieri’s memo—haunts the imagination of immigration debaters on all sides. Where liberals and Democrats see an emerging majority, conservatives and Republicans see a fateful precedent. The pseudonymous “Publius Decius Mus” (later revealed to be the California-born Republican foreign policy operative Michael Anton) argued that the 2016 California election presented a “Flight 93” scenario demanding support for then-candidate Donald Trump.

The Left’s desire and the Right’s fear of what one might call “National Californication” hinders the immigration debate as a whole. But the history of California’s politics on which this analysis relies is incomplete. While immigrant communities do tend to vote Democratic, other substantial population migrations have shifted California’s politics—which were never all that conservative to begin with. Republicans have not held a “trifecta” of the Governorship and both houses of the state legislature in California since 1970; California has not voted more Republican than the national average since 1980, when Californian Ronald Reagan was on the ballot. The state’s Republicans (think former governors Earl Warren of the 1940s and Arnold Schwarzenegger of the 2000s) have also been socially liberal, increasingly out of sync with conservative norms.

Since the end of the Cold War, middle-class families have exited California en masse. Anglo middle-class families have not been replenished in the Golden State; Anglo in-migration has focused on college educated members of what sociologist Charles Murray calls the “New Upper Class.” This handle describes progressive-minded gentry liberals. The state’s suburban home-owning classes, the core of Republican Parties of most states, have left the building. As a result, in 2014—a strongly Republican year—exit polls show Republican gubernatorial nominee Neel Kashkari still would have lost an all-white California to incumbent Democratic Gov. Jerry Brown by 54 percent to 46 percent.

But California doesn’t represent the only possible future. Many of those Golden State middle-class exiles—one estimate puts the number since 2005 at 156,000 of 800,000 total—have gone to Texas, the prototypical Republican state of the Obama era. According to the demographics-are-destiny view of the world, Texas should already show deep blue. Anglos are no longer a majority of the population there and are only narrowly a majority of the electorate. Instead, President Trump won the state by ten points, even while a center-right third-party candidate, Libertarian former New Mexico Gov. Gary Johnson, took three percent of the vote.

Issue driven polls clearly show that Americans have mixed views on immigration. Some polls indicate a strong desire to legalize the status of illegal immigrants and provide a path to citizenship; others show an overall desire to reduce immigration levels. Americans take pride in their history as a nation founded by immigrants but many are concerned over mass lawlessness created by widespread illegal immigration. Driven by fears of an immigrant-dominated Third World American future, many conservatives seek to slow immigration to a trickle.  On the other side, the Left desires to remake the nation as a multi-cultural immigrant-heavy mosaic.  These polarized views ensure an impasse.

Alas, fundamental reform and a sustainable immigration system operating in the national interest remains out of reach.